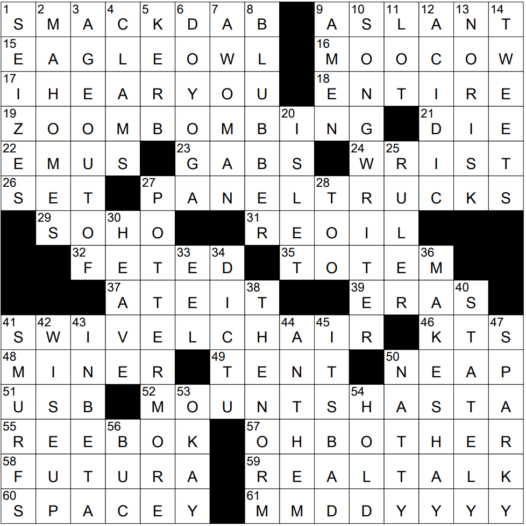 48 Any of the Seven Dwarfs : MINER

A thumb drive is a USB flash drive.

We tend to use the terms typeface and font interchangeably. Technically, a typeface and font are not the same thing. A complete set of characters with a common design is referred to as a typeface (common examples being Helvetica and Arial). That typeface consists of a whole collection of fonts, all varying in weight and size. One set of Helvetica fonts, for example, might be Helvetica 14 point or Helvetica 16 point, i.e. a specific size. Another set might be Helvetica bold, or Helvetica italic. The difference between fonts and typefaces mattered a great deal when printers had collections of individual letters to make up blocks of text. Thankfully, we don’t have to worry about that these days.

5 Spot for a bus stop, in Bristol : KERB

Bristol is the most populous city in the southwest of England. Bristol is a port city, one that had a notorious role in the growth of slavery in America. Manufactured goods from the UK were shipped from Bristol to West Africa where they were traded for Africans who were forcibly transported across the Atlantic for trade in the Americas. The slave ships brought back plantation goods to Bristol.

7 What God is, per an Ariana Grande hit : A WOMAN

Someone praying with eyes closed might open those eyes after saying “Amen”.

I have never tweeted in my life, and have no plans to do so (but one should never say “never”!). Twitter is a microblogging service that limits any post sent to just 280 characters. In a sense, it is similar to this blog. Here I send out a post once a day containing information that I think might be useful to folks (thank you for reading!). I don’t think I could send out anything interesting using just 280 characters.

36 Takes advantage of a situation, so to speak : MAKES HAY

A natty dresser is one who dresses smartly. The term “natty” may come from the Middle English “net” meaning “fine, elegant”, in which case it shares its etymology with the word “neat”.