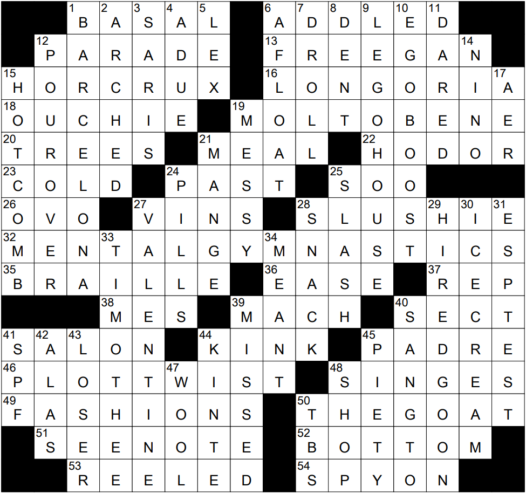 Constructed by: Daniel Okulitch
Edited by: Will Shortz

12 Thanksgiving and Pride both have one : PARADE

The annual Macy’s Thanksgiving Day Parade in New York City has been held every year since 1924, with a brief suspension from 1942-1944. The parade was halted during WWII as there was a need for rubber and helium to support the war effort.

Freeganism is an ideology promoting alternative living strategies that incur little or no cost by using resources that are generally discarded in the conventional economy. Notable tactics are “dumpster diving” (searching for discarded food) and “guerrilla gardening” (growing food in city parks).

15 Dark-magic device with which to achieve immortality, in Harry Potter : HORCRUX

A Horcrux is a magical object found throughout the Harry Potter series of novels, one that comes to the fore in the final two books. It is a very resilient receptacle, difficult to destroy. The evil Lord Vlodemort’s soul was divided and resides in a number of Horcruxes, all of which are destroyed by different characters using various weapons.

Phillipa Soo is an actress and singer who is perhaps best known for portraying Elizabeth Schuyler Hamilton, the title character’s wife in the Broadway production of “Hamilton”.

In Spanish, the month of “febrero” (February) is preceded by “enero” (January).

50 An unrivaled champion, in slang : THE GOAT

The Fool is a character who turns up in many, many Shakespearean plays. For example:

1 Home to the largest football stadium in Europe : BARCELONA

Camp Nou is a football stadium that is home to Futbol Club Barcelona. It is the largest stadium in Europe, with a capacity of 99,354.

4 Together, musically : A DUE

“A due” is a musical term meaning “together” that translates literally from Italian as “by two”.

Justinian the Great was Byzantine Emperor from 527 to 565. Part of Justinian’s legacy is the “Corpus Juris Civilis”, the “Body of Civil Law” that forms the basis of modern civil law in many Western states.

Mange is a skin disorder in animals caused by parasitic mites that embed themselves in the skin, perhaps living in hair follicles. The same disorder in humans is called scabies. We use the adjective “mangy” to describe an animal suffering from mange, but also anything that is seedy or shabby.

29 Gorilla with a job to do : HIRED GOON

An air ball in basketball is a shot that misses without even touching the rim, net or backboard.