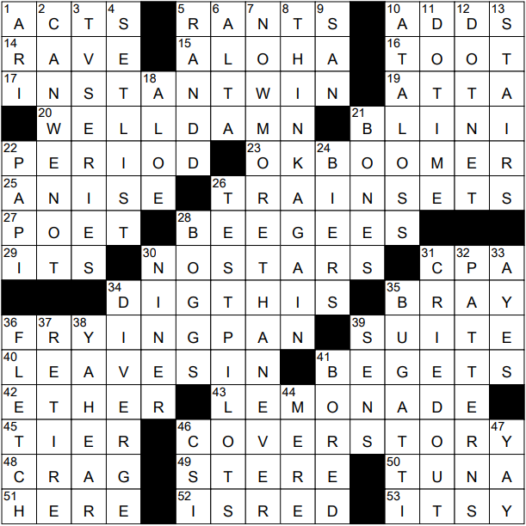 The annual college football game called the Hula Bowl isn’t played anymore. The inaugural game was in 1947, and the last was in 2008.

“A Bug’s Life” is a 1998 animated feature film from Pixar. The storyline is based on the film “The Seven Samurai” and the fable of “The Ant and the Grasshopper”.

The Brothers Gibb (hence, the name “Bee Gees”) were born in England but grew up and started their musical careers in Australia. They moved back to Manchester in the north of England as youths, and there hit the big time.

Brian Wilson is mainly known as the leader and the main songwriter for the Beach Boys. Wildly successful, Wilson fell foul to drug abuse in the seventies, as well as mental illness. Wilson’s life story was the subject of the excellent 2014 biopic “Love & Mercy”.

31 Kind of exam with an “Auditing and Attestation” section : CPA

48 Challenge for a free soloist : CRAG

When free solo climbing, a climber ascends the rock face without the use of protective equipment such as ropes or harnesses. If you’d like to spend a couple of terrifying hours in the comfort of your family room, I recommend viewing the 2018 Oscar-winning documentary film “Free Solo”.

The stere is a metric measure, although it is not part of the modern metric system. Nowadays the stere is used as a measure for firewood, and is equal to one cubic meter.

53 Opposite of ginormous : ITSY

“Ginormous” is a melding of the words “gigantic” and “enormous” and, surprisingly to me, one that dates back to about 1948. I thought that the term was far more contemporary …

Biers are the stands on which one rests a coffin for a service, or perhaps if the corpse is to lie in state. A bier may have wheels on it so that it can be used to transport the coffin to the graveside. The original biers were just flat pieces of wood on which the body was placed, covered with a shroud. Nowadays, we place the body in a casket, and then onto the bier.

28 Wade in the Baseball Hall of Fame : BOGGS

30 Colin Kaepernick was one, familiarly : NINER

35 Alternative to a Lamborghini : BUGATTI

36 Furnish with feathers, as an arrow : FLETCH

44 English adjective that becomes a French noun when an accent is added : MERE