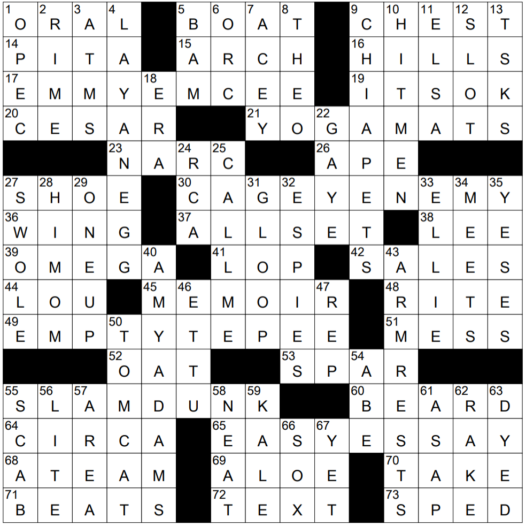 Constructed by: Simon Marotte & Victor Fleming
Edited by: Will Shortz

“Cesar Millan” is the real name of television’s “Dog Whisperer”. Millan has been working with overly aggressive dogs on his show “Dog Whisperer with Cesar Millan” since 2004. Millan was an illegal immigrant from Mexico in the US back in 1990, became legal in 2000 and then became a US citizen in 2009.

I guess the idea is that a text message might cause a “ding” notification on arrival?

Acey-deucey is a fast-played variant of backgammon. Apparently, the game has been a favorite with members of the armed forces since the days of WWI.

To ice is to kill, to put away.

22 Singer known as the “Prince of Motown” : GAYE

RCA was founded in 1919 as the Radio Corporation of America, and as a wholly-owned subsidiary of General Electric (GE). GE divested RCA in 1932, and then reacquired the company in 1986. Today, RCA is just a brand name.

Miss Ellie is the matriarch of the famed Ewing family, around which the TV series “Dallas” was written. For most of the series, Miss Ellie was played by Barbara Bel Geddes, and once in a TV movie of Dallas by Molly Hagan. Barbara Bel Geddes left the show in 1984 and was replaced by the celebrated actress Donna Reed. When Bel Geddes decided to return to the show the following year, Reed was fired. This was much to Reed’s chagrin, and so a lawsuit ensued.

“Enchanted” is quite an entertaining 2007 Disney film. It tells the story of Princess Giselle, who is forced from her animated world to live in the real world of New York City.

In Act I of William Shakespeare’s “Julius Caesar”, a soothsayer warns the doomed leader to “beware the ides of March”. Caesar ignores the prophecy and is subsequently killed on the steps of the Capitol by a group of conspirators on that fateful day.

The Fens is a picturesque parkland in Boston. Once a saltwater marshland, urban development since the late 1800s has turned the area into what is essentially a freshwater lagoon. The Fens (sometimes “Back Bay Fens”) gave its name to the Fenway-Kenmore neighborhood, and ultimately to the famous Fenway Park baseball stadium.