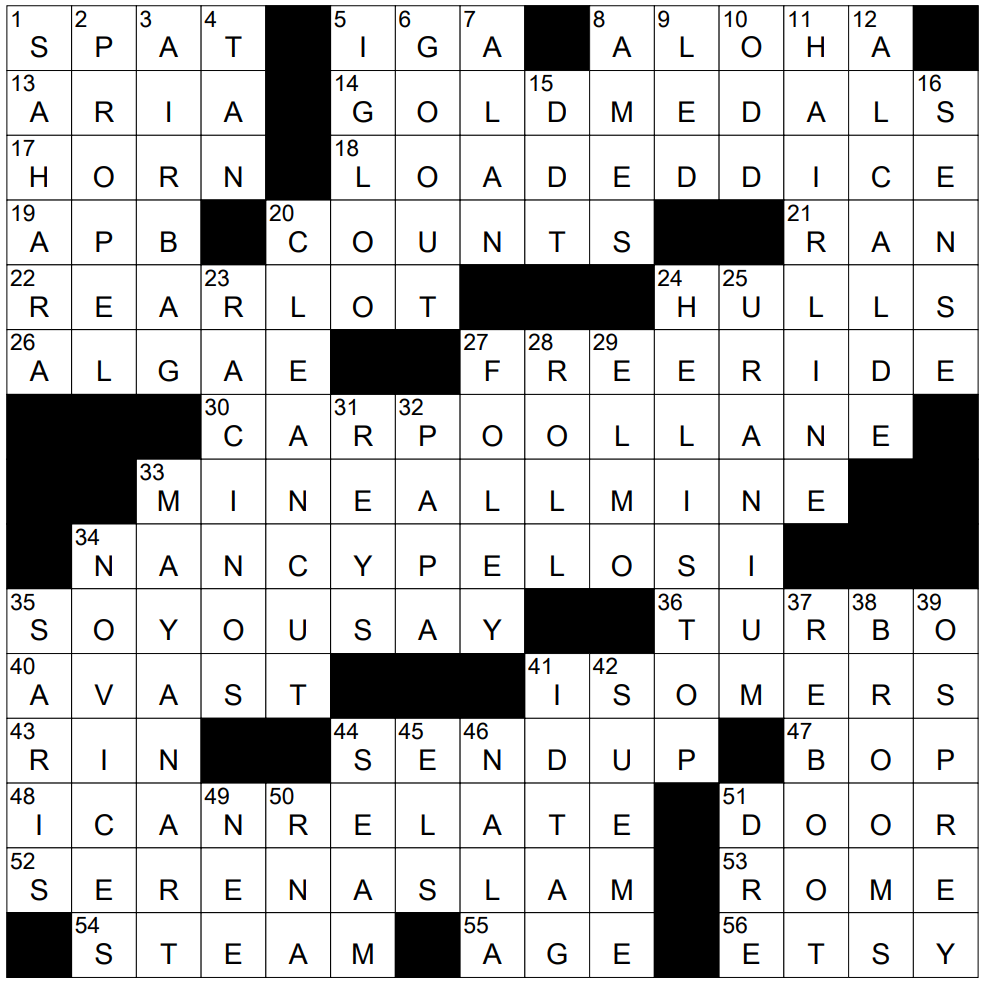 Constructed by: Andrew Ries & Caitlin Reid
Edited by: Will Shortz

1 Showed derision, in a way : SPAT

A cantata is a piece of music that is sung, as opposed to a sonata, which is a piece that is played on some instrument, often a piano. A sonatina is in effect a sonata that has been labeled as something lighter and shorter.

30 Something that not a single person can go in? : CARPOOL LANE

47 Style of music whose name is derived from scat : BOP

“Bop” is a shortened form of “bebop”, the name of a jazz style that dates back to the early 1940s. “Bebop” probably came from “Arriba! Arriba!”, which were words of encouragement uttered by Latin-American bandleaders to their musicians.

1 Habitat for the addax antelope, which can go a year without drinking : SAHARA

The isotope of uranium that is mostly found in nature in uranium-238. Natural uranium also contains a small amount (less than 1%) of uranium-235. When uranium is “enriched”, the percentage of uranium-235 is increased. Uranium containing 80% or more uranium-235 is considered “weapons grade”. Uranium was discovered in 1789, and named for the planet Uranus that had been discovered a few years earlier.

29 Nonhuman host of a talk show on HBO Max : ELMO

Curious George is a character in a series of children’s books written by husband and wife Hans Augusto and Margret Rey. The couple wrote the original stories in Paris, taking the manuscripts with them as they fled from the city ahead of the Nazi invasion in 1940.

35 They may be worn with cholis : SARIS

The osprey is also known as the sea hawk or fish eagle. Osprey nests are large heaps of sticks usually built in forks of trees and rocky outcrops. I’ve seen quite a few osprey nests built on the tops of light poles and utility poles.

The ends (borders) of the word “local” are letters L (els).