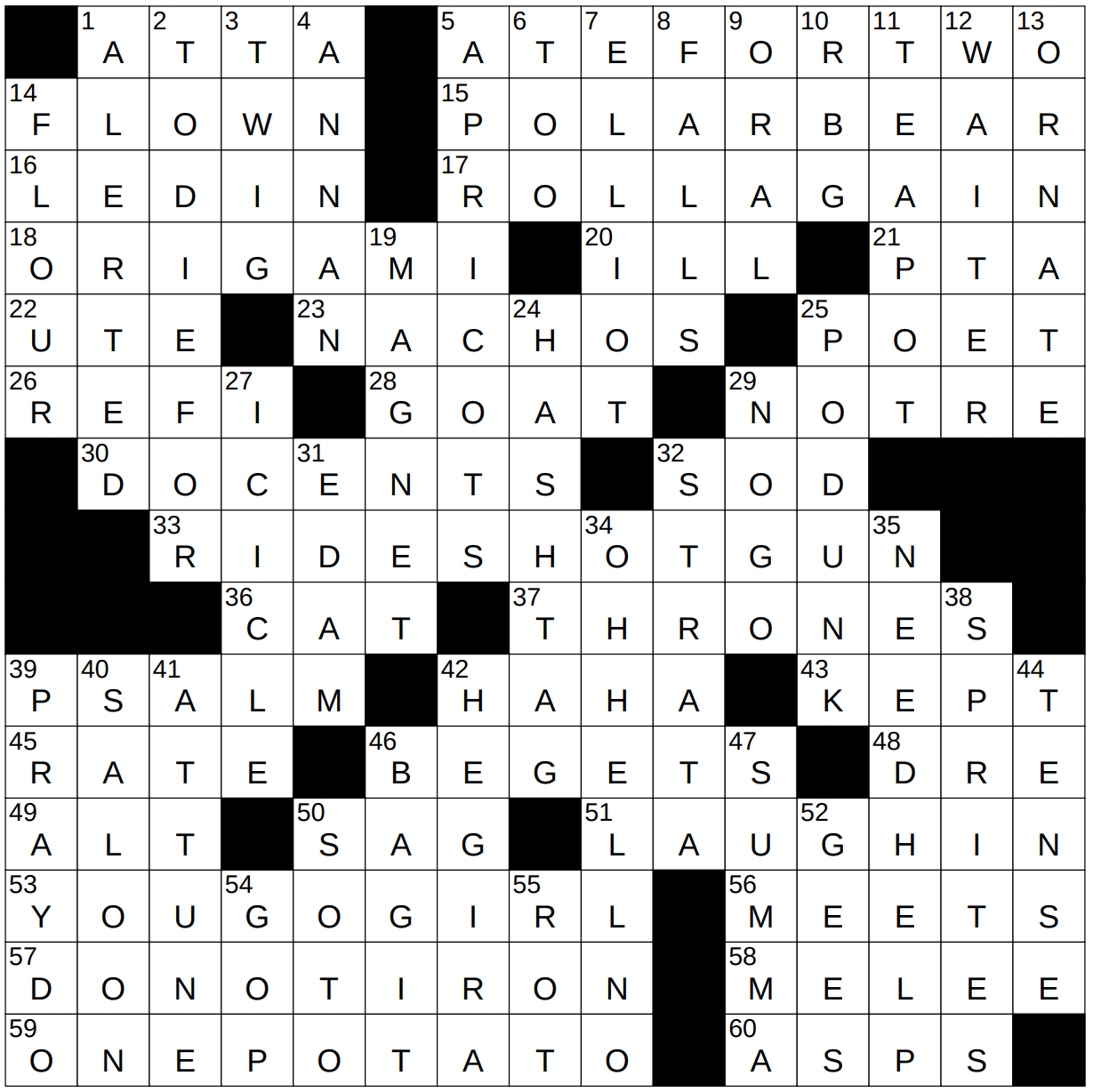 Constructed by: Christina Iverson & Caitlin Reid
Edited by: Will Shortz

15 Animal on the reverse side of a Canadian two-dollar coin : POLAR BEAR

17 Instruction in a game with dice : ROLL AGAIN

22 Tribe known for ranching and oil and gas operations : UTE

23 Snack that can be messy to eat : NACHOS

The meter of a poem is its rhythmic structure.

“Docent” is a term used for a university lecturer. There are also museum docents, people who serve as guides for visitors to their institutions and who usually provide their services for free. The term comes from the Latin “docere” meaning “to teach”.

33 Sit beside a driver : RIDE SHOTGUN

The person riding alongside the driver of a vehicle is said to be “riding shotgun”. Even though the phrase is a reference to the armed guard who rode beside the driver of a stagecoach in the Old West, the term wasn’t coined until the early 20th century.

“Rowan & Martin’s Laugh-In” was originally recorded as a one-off special for NBC in 1967, but it was so successful that it was brought back as a series to replace the waning spy show “The Man from U.N.C.L.E.” Personally, I loved both shows!

One Potato is a counting out game designed to select a person who is “it” in a kid’s game. The selection depends on the rhyme:

The garter snake is found right across the continent, It is in fact the most widely distributed genus of reptile in North America, being found anywhere from Southeast Alaska to Central America.

Canadian actor Elliot (formerly “Ellen”) Page came to prominence playing the female lead in the 2007 hit film “Juno”. Page also played the female lead in one of my favorite films of recent time, namely 2010’s “Inception”. Elliot came out as a gay woman in 2014, and then as a trangender man in 2020.

For well over a century now, the twin cities of Niagara Falls, New York and Niagara Falls, Ontario have been popular spots for honeymooners. Niagara Falls got a boost as a honeymoon destination in 1953 with the release of “Niagara”, a film noir starring Marilyn Monroe and Joseph Cotton.

“Podunk” is an Algonquian word meaning a boggy place (literally “where you sink in mire”). European settlers used the name “Podunk” for the indigenous people that lived in what is now southern New England. These Podunks had no name for themselves as a tribe, and they were christened “Podunks” as they lived on relatively marshy lands. “Podunk” has come to mean “the middle of nowhere”.

47 Word on some diplomas : SUMMA

“G”, “K” and “thou” are slang terms used for a thousand dollars.