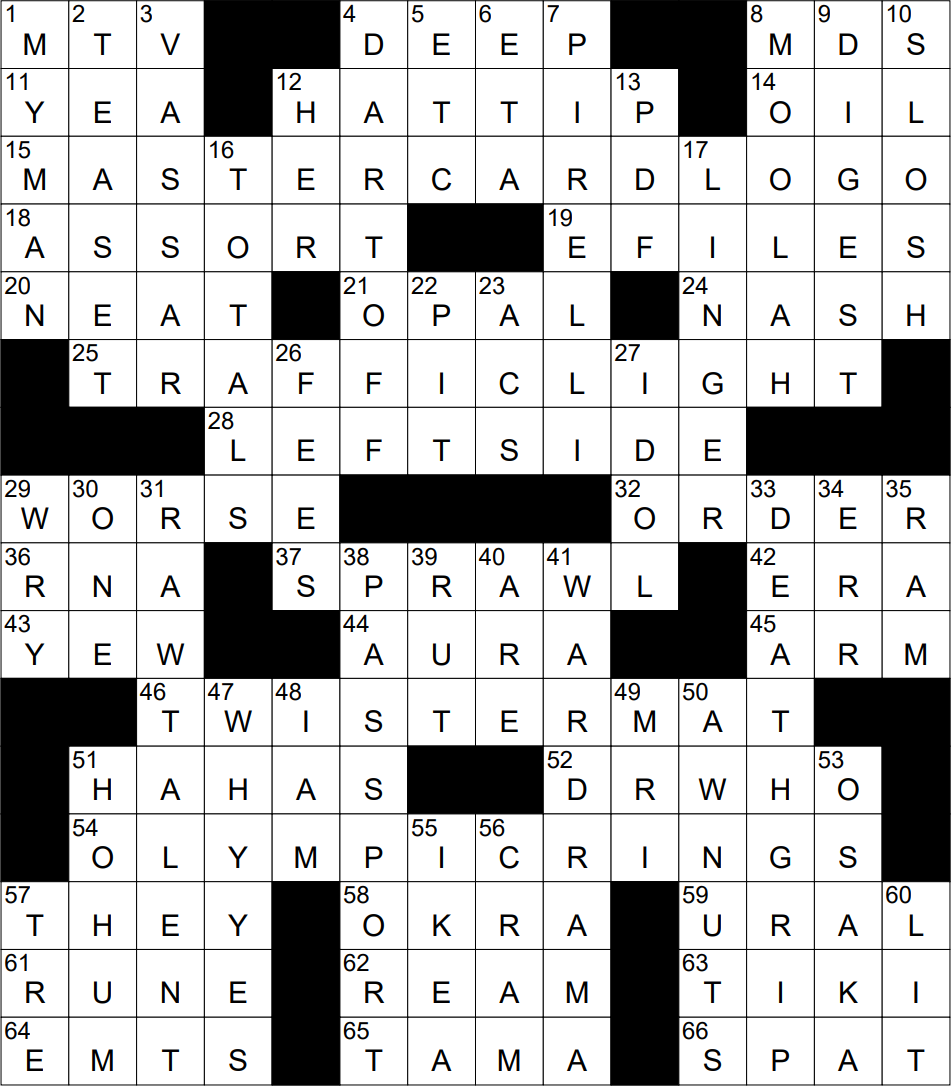 Constructed by: Erica Hsiung Wojcik and Matthew Stock
Edited by: Will Shortz

I think that “House” is one of the better shows made by Fox television. It is fun for me, coming from the other side of the Atlantic, to see English actor Hugh Laurie in the dramatic title role. I have been watching him in various comedic roles for decades. Famously, he played Bertie Wooster opposite Stephen Fry in P.G. Wodehouse’s “Jeeves & Wooster”, as well as one of the bumbling “bad guys” in the film “101 Dalmatians” (the version starring Glenn Close).

Mastercard is a financial services company that is headquartered in Harrison, New York. The company was originally called Master Charge and was set up by a group of California banks to compete with BankAmericard (which later became Visa).

19 Takes care of taxes without help from the post office : E-FILES

21 Gemstone that can come from petrified wood : OPAL

The family of trees and shrubs known as yews propagate by producing a seed surrounded by soft, sweet and brightly colored aril. Birds eat the fruit and then disperse the seed in their droppings. The birds leave the seed undamaged, and so are unharmed by the potent poisons taxane and taxol that are found within the seed. The seeds are highly toxic to humans.

Twister is a game requiring a lot of physical dexterity and flexibility. It involves players placing specific hands and feet onto colored pads on a mat, as directed by a spinning arrow on a board. Sales of the game got a great boost in 1966, when Eva Gabor played Twister with Johnny Carson on “The Tonight Show”.

52 TV series with a Time Lord, informally : DR WHO

The Time Lords are an alien race on the BBC sci-fi show “Doctor Who”. The title character, known as “the Doctor”, is in fact a Time Lord.

59 ___ Mountains, formation made by the collision of the continents Laurasia and Kazakhstania : URAL

A tiki is a large carving of wood or stone resembling a human form that is found in Polynesian cultures. The carvings often mark out boundaries surrounding sites that are sacred to the locals.

The Māori are the indigenous people of New Zealand. They are eastern Polynesian in origin and began arriving in New Zealand relatively recently, starting some time in the late 13th century. The word “māori” simply means “normal”, distinguishing mortal humans from spiritual entities. The Māori refer to New Zealand as “Aotearoa”.

The first use of a national emergency phone number was in 1937 in the UK, where the number 999 was introduced to call emergency services. If you need emergency services in the UK or Ireland to this day, you have to dial 999. It’s not really clear why 911 became the emergency number in the US. The most credible suggestion (to me) is that when it was introduced by the FCC in 1967, it was a number that “fit” with the numbers already used by AT&T for free services (211-long distance; 411-information; 611-repair service).

Tama Janowitz is an American writer. She was born in San Francisco but has lived much of her life in New York City. In New York, Janowitz hung around with the likes of Andy Warhol and became well known in literary circles. Her most famous work is a collection of short stories called “Slaves of New York”, which was made into a film of the same name in 1989.

66 Expressed agitation, as a llama : SPAT

Pirelli is a tire manufacturer located in Milan. Among its many claims to fame, Pirelli is known for the Pirelli Calendar, the company’s limited-distribution trade calendar that has been produced since the mid-sixties.

“Patton” is an excellent biographical movie about General George Patton and his exploits during WWII. The film was released in 1970 and starred George C. Scott in the title role. “Patton” won seven Oscars including Best Picture and one for Scott as Best Actor. Scott refused his award saying that he disliked “acting competitions”. In so doing, he became the first actor to refuse an Oscar.

“Platoon” is a 1986 movie written and directed by Oliver Stone. The storyline comes out of Stone’s own experiences in Vietnam as an infantryman. It is gritty stuff, and is Stone’s response to the more “glamorous” movie “Green Berets” starring John Wayne. And that famous piece of classical music included the soundtrack, that is “Adagio for Strings” by Samuel Barber.

MRI scans can be daunting for many people as they usually involve the patient lying inside a tube with the imaging magnet surrounding the body. Additionally, the scan can take up to 40 minutes in some cases. There are some open MRI scanners available that help prevent a feeling of claustrophobia. However, the images produced by open scanners are of lower quality as they operate at lower magnetic fields.