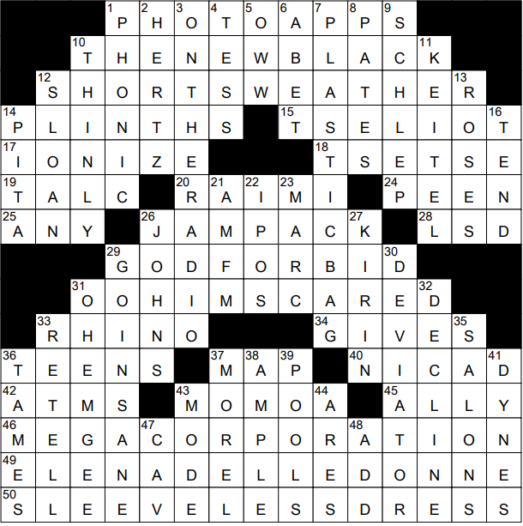 Constructed by: Johan Vass
Edited by: Will Shortz

15 Writer whose initials, when doubled, become another answer in this puzzle : TS ELIOT

28 Subject of some MK-Ultra experiments : LSD

33 Java has a rare species of one : RHINO

A relatively well-preserved set of wooly mammoth remains were discovered in Siberia in 2012. The remains included some intact cells, and there is talk about the possibility of cloning the animal who died between 4,000 and 10,000 years ago. Scary stuff …

A NiCad rechargeable battery is so called because the electrodes are made of nickel oxide hydroxide and metallic cadmium.

Jason Momoa is a model and actor who is perhaps best known for playing superhero Aquaman in several DC Comics films. He also played warrior leader Khal Drogo in the HBO TV series “Game of Thrones”. In 2017, Momoa married actress Lisa Bonet, who played Denise Huxtable on “The Cosby Show”.

“Aquaman” is a 2018 superhero film starring Jason Momoa in the title role. Momoa had previously played the Aquaman character in “Batman v Superman: Dawn of Justice” in 2016, and in “Justice League” in 2017.

46 Listing in the Fortune 100 : MEGA-CORPORATION

“Jumper” is one of those terms that caused me no end of grief when I moved to the US. I think my wife-to-be was close to dumping me on one of our first dates when she heard me talking about jumpers that I wore all the time. Where I come from, a jumper is a sweater, and can be worn by males and females alike. The dress known as a jumper in the US, back in Ireland we’d call a pinafore or pinafore dress.

2 One cycle per second : HERTZ

Klingons are a warrior race often featured in the “Star Trek” franchise of shows. Back in the first “Star Trek” movie, the actor James Doohan (who played “Scottie”) put together some Klingon dialogue that was used in the film. For subsequent movies, the American linguist Marc Okrand was commissioned to develop a working Klingon language, which he duly did, using the original words from Doohan as its basis.

44 Father of many children with Aphrodite : ARES