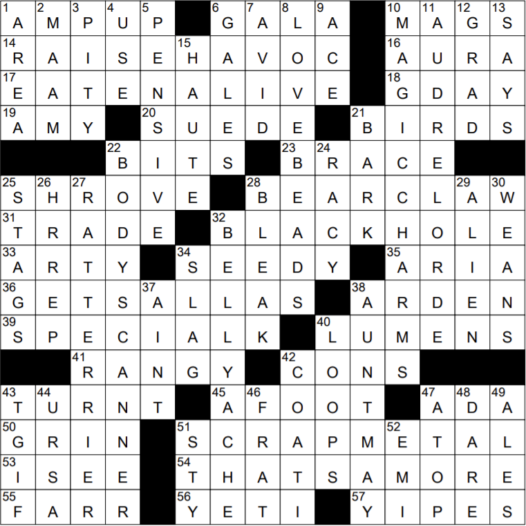 14 Be a big-time troublemaker : RAISE HAVOC

25 Heard the confession of and absolved, old-style : SHROVE

To shrive is to obtain absolution by confessing and doing penance. The past tense of “shrive” is “shrove”. The verb gives its name to Shrove Tuesday, the day before the season of fasting known as Lent. Shrove Tuesday is named in recognition of the early Christian tradition of confessing the week before Lent.

A black hole in space is a region that is extremely dense and one that has an enormous gravitational field. The force of gravity is so great that not even light can escape, so all that can be observed is “blackness”, which gives the phenomenon the name of “black hole”. It is believed that black holes form when large stars reach the end of their lives and collapse in upon themselves.

The opera “Dido and Aeneas” was written by English Baroque composer Henry Purcell. The story was taken from Virgil’s epic poem “Aeneid” and tells of the love affair between Dido, the Queen of Carthage, and Aeneas, the Trojan hero.

54 Song title following the lyric “Scuzza me, but you see, back in old Napoli …” : THAT’S AMORE

“That’s Amore” is a pop standard written by Harry Warren and Jack Brooks in 1952. “That’s Amore” became the signature song for Dean Martin after he sang it (with some help from Jerry Lewis) in the 1953 comedy film “The Caddy”. “When the moon hits your eye like a big pizza pie, that’s amore …”

Actor Jamie Farr is best known for playing the cross-dressing Max Klinger in the sitcom ”M*A*S*H”. Although Farr landed a role in the 1955 movie “Blackboard Jungle”, his career didn’t really take off until he started appearing regularly on “The Red Skelton Show”. Years later he managed to get a one-episode appearance in ”M*A*S*H”, and his character and performance were received so well that he became a regular on the show. Farr actually did serve in the US Army in Korea, although it was after hostilities had ended. The dog tags that Farr wore when filming ”M*A*S*H” were the ones that he actually wore while serving in the military.

The term “hip” is a slang term that was used in the 1930s and 1940s to mean “cool, informed about the latest ideas and styles”. By the end of the 1940s, “hipsters” were “hip” people, jazz aficionados, and people who adopted the perceived lifestyle of jazz musicians of the day. In the 1960s, the term “hippie” developed from “hipster”, to describe a member of the youth counterculture that emerged in the US.

The rat terrier is known as a farm dog, and was especially common on farms in the twenties and thirties. The breed has a great reputation as a hunting companion and for controlling vermin.

29 Video game franchise based on a sci-fi film franchise : ALIEN

The 1979 sci-fi horror movie “Alien” was the big break for Sigourney Weaver as it was her first lead role, and her character ended up as central to a whole set of sequels. The movie’s producers made a very conscious decision to cast a female in the lead role so as to have the film stand out in the male-dominated genre of science fiction. Famously, the film was publicized with the tagline “In space no one can hear you scream”.

“Ain’t She Sweet” is a popular song first published in 1927, composed by Milton Ager and Jack Yellen. Ager wrote the song for his daughter, Shana. Shana grew up to become Shana Alexander, a political commentator on CBS’s “60 Minutes”. Famously, the Beatles recorded several versions of “Ain’t She Sweet”.

Aunt May and Uncle Ben Parker are characters in the spider-Man universe created by Marvel Comics. The couple’s nephew is Peter Parker, aka Spider-Man.

42 Relative of a raccoon : COATI