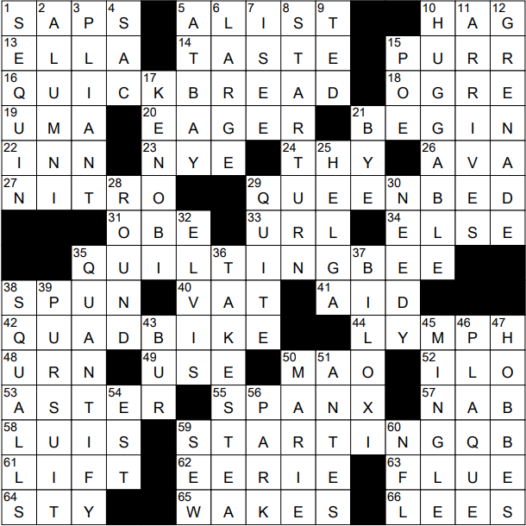 Themed answers each comprise two words, words that start with the letters QB:

16 It doesn’t need time to rise before baking : QUICK BREAD

“Traffic” is a crime drama film released in 2000 that is focused on the illegal drug traffic that enters the US over the southern border. The movie is actually an adaptation of a British television series called “Traffik”.

66 Sediment in a wine barrel : LEES

Our use of the phrase “at bay”, to mean “in check”, derives from the older expression “at abai” used to describe a hunted animal “unable to escape”.

25 Mate for Hägar the Horrible : HELGA

Elvis Costello is an English singer and songwriter whose real name is Declan MacManus. Although Costello is more associated with the punk rock music scene, he is very active with the Jazz Foundation of America. He does a lot of work with the foundation to help jazz and blues musicians in need, especially after Hurricane Katrina.

37 Mississippi city on the Gulf of Mexico : BILOXI

Back in the 16th century, a hobbyhorse was a mock horse that was used as a prop in morris dancing. The figure was wrapped around the waist of a dancer, creating the impression that the horse was being ridden. By the 1580s, the term “hobbyhorse” began to describe toy riding horse used by a child. A century later, the word “hobby” was being used for a favorite pastime, an activity that doesn’t real go anywhere, just like a hobbyhorse.