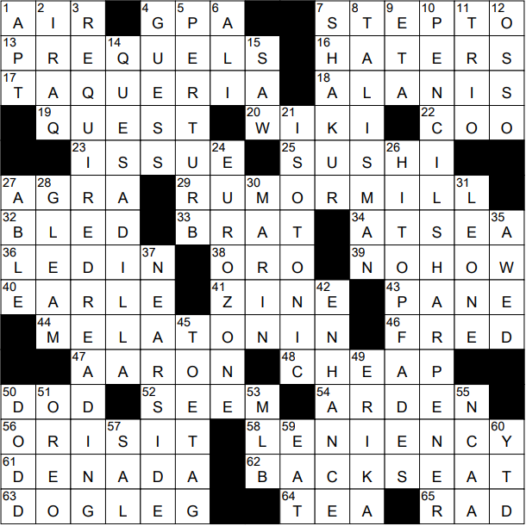 17 Moles are found in it : TAQUERIA

For many years, I had to deal with jet lag almost every couple of months. I swear by the diet supplement melatonin, which you can buy over the counter here in the US. But, I am no doctor so don’t listen to anything I say …

2 Where the Noah’s Ark story is thought to have occurred, today : IRAQ

6 Subject of David Remnick’s “King of the World” : ALI

“King of the World” is a biography of Muhammed Ali written by Pulitzer prize winner David Remnick. It was made into a TV movie in 2000. Apparently the book is fabulous, and the TV movie is quite the opposite.

“Isotonic” means “of equal tension” and is of Greek origin. There are two common uses of the term. Solutions of equal concentration are said to be isotonic. An isotonic solution of saline has the same amount of salt (NaCl) as there is in blood. Also, in the isotonic contraction of a muscle, the amount of tension stays the same whereas the muscle’s length changes. Lifting an object at a constant speed causes the isotonic contract of the lifting muscle.

Sergio Leone was an Italian film director, and someone very much associated with the Spaghetti Western movie genre . Perhaps most famous of Leone’s westerns were the so-called “Man with No Name” trilogy starring Clint Eastwood. The three films are:

“Six Feet Under” is reportedly a great TV drama aired by HBO, and one that I fully intend to take a look at one day. The “six feet under” is a reference to the show’s storyline that features a family funeral business.

49 Actress Alexander of “Get Out” : ERIKA

Erika Alexander is the actress who played Pam Tucker, a cousin that came to live with the Huxtable household in “The Cosby Show”. Alexander also won many awards for playing Maxine Shaw on the Fox sitcom “Living Single”.

51 Name for a Dalmatian, perhaps : OREO