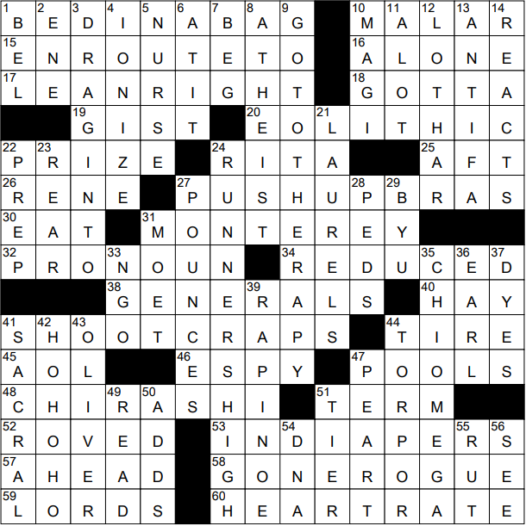 20 Period at the beginning of the Stone Age : EOLITHIC

24 Wilson on the Hollywood Walk of Fame : RITA

Actress Rita Wilson is also a producer. She produced the 2002 movie “My Big Fat Greek Wedding”, which was destined to become the highest-grossing independent movie of all time. Wilson married fellow actor Tom Hanks in 1988.

René Cassin drafted the Universal Declaration of Human Rights after WWII that was adopted by the General Assembly of the United Nations in 1948. This work led to Cassin being awarded the Nobel Peace Prize in 1968.

Rhinitis is irritation and inflammation of the mucous membrane inside the nose. Usually, rhinitis is a result of inhalation of allergens such as pollen and pet dander.

41 Have a natural interest in gambling? : SHOOT CRAPS

The adjective “peripatetic” means travelling on foot, or walking from place to place. The term comes from a Latin word that was applied to the disciples of Aristotle. Aristotle had the habit of teaching while strolling through the public meeting place in Athens. The Latin word comes from the Greek “peripatetikos” meaning “given to walking about”.

Acetylene is one of the simplest hydrocarbons, and has the formula C2H2. About 20% of the acetylene produced in the world is used for oxyacetylene gas welding and cutting.

“Mandrake the Magician” is a comic strip that was created by Lee Falk in 1934. Some folks hold that Mandrake was the comic world’s first superhero. Mandrake lives in a high-tech home called Xanadu, and fights crime with his best friend Lothar.

“Oliver Twist” is an 1838 novel by Charles Dickens. The title character is an orphan who escapes from an oppressive apprenticeship with an undertaker. He gets drawn into the criminal underworld of London, where he meets up with some colorful characters such as the Artful Dodger, Fagin and Bill Sykes. Television, stage and film adaptations of “Oliver Twist” tend to lift the overall mood of the story, which in the novel is pretty bleak.

Rush is a Canadian rock band that has been around since 1968. The band has three members: Geddy Lee, Alex Lifeson and Neil Peart.