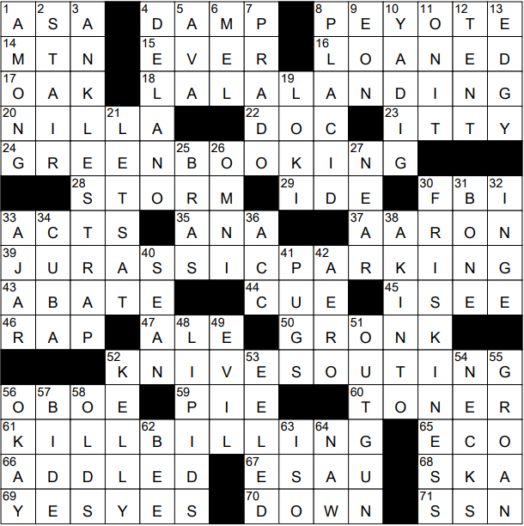 Constructed by: Alexander Liebeskind
Edited by: Will Shortz

Themed answers each comprise a film title followed by -ING:

8 Hallucinogen from a cactus : PEYOTE

A triceratops is a dinosaur that kind of looked like a rhinoceros, but with three horns. The name “triceratops” is derived from the Greek for “three-horned face”.

Battle rapping (also “rap battling”) is a contest in which two or more rappers “fight it out” using opposing, improvised lyrics. I’d be annihilated …

Rob “Gronk” Gronkowski is an NFL tight end who was drafted by the New England Patriots in 2010. Gronk is one of five brothers, all of whom have played professional sports.

“Kill Bill” is a 3-part Quentin Tarantino movie (I haven’t seen it, as I really don’t “do” Tarantino). “Kill Bill” started off as one film, but as the running time was over four hours, it was split into two “volumes”, released several months apart in 2003 and 2004. There has been a lot of talk about making “Kill Bill: Volume 3”.

67 Biblical progenitor of the Edomites : ESAU

Mel Brooks’ real name is Melvin Kaminsky. Brooks is one of relatively few entertainers who have won the “Showbiz Award Grand Slam” i.e. an Oscar, Tony, Grammy and Emmy (EGOT). He is in good company, as the list also includes the likes of Richard Rogers, Sir John Gielgud, Marvin Hamlisch and Audrey Hepburn.

7 Home to the largest Goya collection in the world : PRADO

The word “brassière” is French in origin, but it isn’t the word that the French use for a “bra”. In France, what we call a bra is known as a “soutien-gorge”, translating to “held under the breast”. The word “brassière” is indeed used in France but there it describes a baby’s undershirt, a lifebelt or a harness. “Brassière” comes from the Old French word for an “arm protector” in a military uniform (“bras” is the French for “arm”). Later “brassière” came to mean “breastplate” and from there the word was used for a type of woman’s corset. The word jumped into English around 1900.

It was Christopher Columbus who claimed the island now known as Cuba for Spain, in 1492. He named his new find “Isla Juana” after Juan, Prince of Asturias. Columbus landed on the northeastern coast near what is now the city of Baracoa. The city of Baracoa developed from the first Spanish settlement on the island, established in 1511 by the conquistador Diego Velázquez de Cuéllar.

41 Dogs in Tibetan monasteries, once : PUGS

“Since U Been Gone” is a song written by Max Martin and Dr. Luke that they hoped would be recorded by Pink. Pink passed on the opportunity to record it, and so they offered it to Hilary Duff. Duff passed as well, and so the song went to Kelly Clarkson. Clarkson’s 2004 recording did well in the charts.

Hummingbirds are the smallest of all the birds. The bee hummingbird is native to Cuba and weighs less than a tenth of an ounce and is about two inches in length!