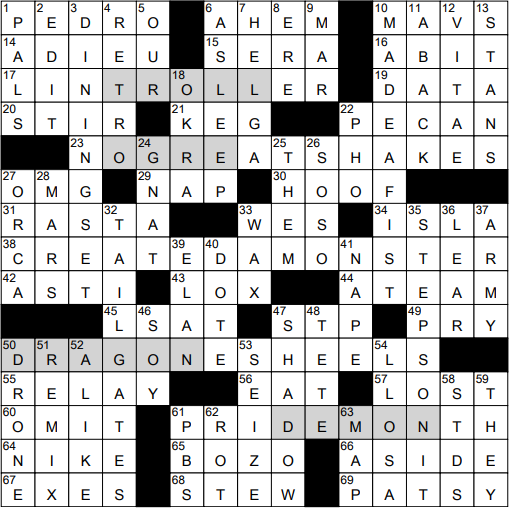 Themed answers each include a MONSTER as a hidden word:

Pedro Almodóvar is a very successful Spanish film director, born in a small town in the region of La Mancha (made famous by Don Quixote). I’m afraid I don’t recognize any of Almodovar’s films.

As Doris Day told us, “que será, será” is Spanish for “whatever will be, will be”. Actually, the phrase is “pseudo-Spanish”, and isn’t grammatically correct.

The 1956 song “Que Será, Será (Whatever Will Be, Will Be)” was first performed by Doris Day in the Hitchcock film “The Man Who Knew Too Much”. Day later used the same tune as the theme song for the sitcom “The Doris Day Show” that aired in the late sixties and early seventies.

17 Good accessory for the owner of a shedding dog : LINT ROLLER (hiding “TROLL”)

“Troll” is a term that comes from Norse mythology. Trolls are less-than-helpful creatures that tend to live on isolated mountains, in caves and under bridges.

23 Nothing to write home about : NO GREAT SHAKES (hiding “OGRE”)

31 One who might smoke ganja as a sacrament, informally : RASTA

Ibiza is a Mediterranean island located almost 100 miles off the Spanish coast. It is a very popular tourist destination, largely for its legendary nightlife.

Asti is a sparkling white wine from the Piedmont region of Italy that is named for the town of Asti around which the wine is produced. The wine used to be called Asti Spumante, and it had a very bad reputation as a “poor man’s champagne”. The “Spumante” was dropped in a marketing attempt at rebranding associated with a reduction in the amount of residual sugar in the wine.

Lox is a brine-cured salmon filet that is finely sliced. The term “lox” comes into English via Yiddish, and derives from the German word for salmon, namely “Lachs”.

I remember seeing a lady named Carolyn Davidson on the television show “I’ve Got a Secret”. Davidson created the Nike “swoosh” back in 1971 when she was a design student at Portland State. She did it as freelance work for Blue Ribbon Sports, a local company introducing a new line of athletic footwear. The “swoosh” is taken from the wing of the Greek goddess of victory, Nike. Years later, BRS changed its name to Nike, so I suppose the company should be grateful to Carolyn for both the great design, and a great company name.

The area surrounding Portland, Oregon between Beaverton and Hillsboro is often referred to as Silicon Forest due to the number of hi-tech companies located therein. Silicon Forest is home to mainly subsidiaries of companies such as Intel, Hewlett-Packard, Xerox and Epson.

10 Prepared to play rock paper scissors : MADE A FIST

A curriculum vitae (“CV” or “vita”) is a listing of someone’s work experience and qualifications, and is used mainly in making a job application. The term “curriculum vitae” can be translated from Latin as “course of life”.

The non-binary (NB, enbie) spectrum of gender identities covers those that do not qualify as exclusively masculine or feminine.

28 Locale of the Perseverance rover : MARS

Army ants are a collection of over two hundred different species of ants. Each species is known for aggressively raiding a certain area en masse, foraging for food. Army ants also stay on the move, never building permanent nests.