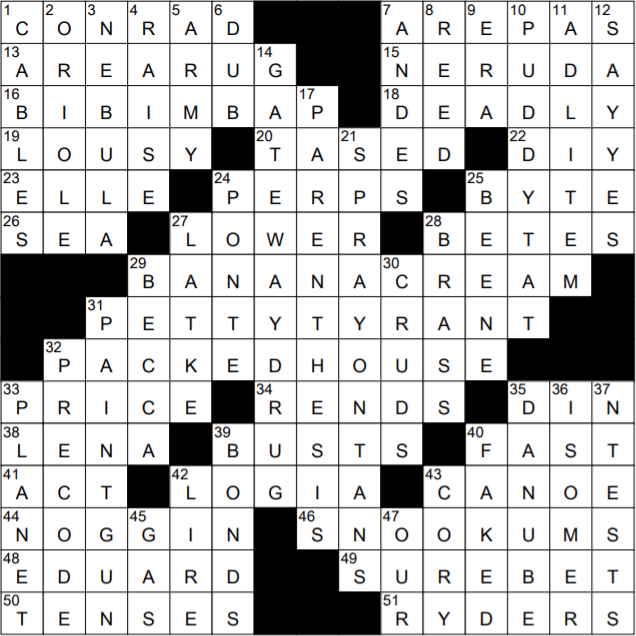 “Bye Bye Birdie” is a stage musical set in 1958, and first performed in 1960 on Broadway. It was inspired by the real-life events surrounding Elvis Presley getting drafted into the Army in 1957. The “Elvis” character in the musical is called Conrad Birdie, a play on the name of the singer Conway Twitty. One of the songs from the show is “Put on a Happy Face”.

An arepa is a cornmeal cake or bread that is popular in Colombian and Venezuelan cuisines in particular. Each arepa has a flat, round shape and is often split to make a sandwich.

15 Poet who wrote “Love is so short, forgetting is so long” : NERUDA

The name of the Korean dish bibimbap translates literally as “mixed rice”, with “bibim” meaning “mixed ingredients” and “bap” meaning “rice”. Generally, the dish comes as a bowl of white rice topped with sautéed vegetables flavored with chili pepper paste. Variants often include a fried egg and sliced beef.

22 Like typical projects in Popular Mechanics magazine, in brief : DIY

“Logia” is a term of Greek origin that is used for the collection of sayings attributed to Jesus.

At least colloquially, a telegram was a telegraph message sent inland, while a cablegram was sent overseas. The use of “cablegram” came about as the message was transmitted via a submarine cable.

The Crab Nebula is located in the constellation of Taurus. It was discovered in 1731 by English astronomer John Bevis, although it appears to correspond to a bright supernova reported by Chinese astronomers in 1054.

7 Home to the highest active volcano in the world : ANDES

Sylvester J. Pussycat is also known as Puddy Tat, and is a character who appeared in “Looney Tunes” and “Merrie Melodies” cartoons. Sylvester is the cat who is often trying to get the better of Tweety Bird, Speedy Gonzales and Hippety Hopper. Sylvester’s trademark line is the exclamation “Sufferin’ succotash!”, which emphasizes the character’s pronounced lisp.

17 The right one can produce a smile : PARENTHESIS

The Ponte Vecchio is the oldest bridge that spans the Arno river in Florence, Italy. The bridge dates back to medieval times, and indeed the name “Ponte Vecchio” translates as “Old Bridge”. Famously, there are two rows of shops built on either side of the roadway crossing the bridge.

25 Eponym of a lifetime achievement award in fashion since 1984 : BEENE

Geoffrey Beene was an American fashion designer. He had an impressive list of clients that included First Ladies Lady Bird Johnson, Pat Nixon and Nancy Reagan. He had a very successful line of clothing called “Beene Bag”.

The Motion Picture Production Code that was in place from 1930 to 1968 was named for Presbyterian elder Will H. Hays. Hays was hired by the movie studios to help clean up Hollywood’s image after several scandals had hit the industry. The actual list of standards was drawn up by Catholic layman Martin Quigley and Jesuit priest Father Daniel A. Lord in 1929, but the code still came to be known as the Hays Code.

Planet Hollywood is a fun, themed restaurant where you can eat, listen to rock music and browse some interesting Hollywood memorabilia. The restaurant venture is backed by several Hollywood stars: Sylvester Stallone, Bruce Willis, Demi Moore and Arnold Schwarzenegger. I actually bumped into “Arnie” in a Los Angeles “Planet Hollywood” many moons ago, soon after the chain opened in the early nineties.

35 River that flows through or beside 10 countries : DANUBE

The Danube is the second largest river in Europe (after the Volga). It flows through four European capitals (Vienna, Budapest, Belgrade and Bratislava).

36 Compound with a chemical “twin” : ISOMER

Vatican City is not a member of the European Union (EU), but does have the euro as its official currency by virtue of a special agreement with the EU. Vatican City is allowed to issue a limited number of its own euro coins, but no banknotes. The cap on the number of coins issued is raised in the year that a new pope is named. As a result of the limitations, Vatican euro coins are highly prized by collectors.

43 Booker of the Senate : CORY