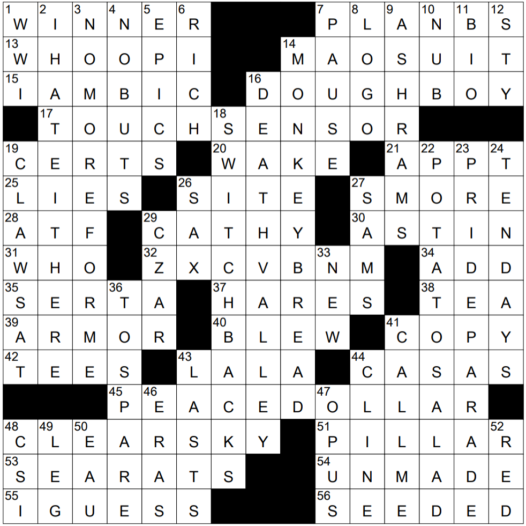 Red Guards were young paramilitaries who were mobilized by Chairman Mao during the Cultural Revolution in China in the mid-sixties.

27 Assembly at a camporee, perhaps : S’MORE

A jamboree is a very large gathering of scouts from around the country, and sometimes from around the world. The exact etymology of “jamboree” is much debated, but it is likely to be a term coined by Lord Baden-Powell, the founder of the scouting movement. Baden-Powell lived in Africa for many years and so many think that the term is based on “jambo”, the Swahili word for “hello”. A smaller, more local gathering is referred to as a “camporee”.

“Cathy” is a comic strip drawn by Cathy Guisewite. The strip was largely based on Guisewite’s own life experiences. For decades, cartoon Cathy was a single woman dealing with food, love, family and work. Cathy married her longtime boyfriend Irving in 2005, and the strip ended its run in 2010 with the revelation that Cathy was expecting a baby girl.

32 Line just before a comma : ZXCVBNM

That would be the bottom row of a QWERTY keyboard, up to the comma.

35 Brand with an iComfort line : SERTA

The adjective “leporine” means “resembling or relating to a hare or rabbit”. The term comes from the Latin “lepus” meaning “hare”.

8 Jordan is found on one, notably : LOGO

16 Where scenes on Tatooine were filmed for “Star Wars” : DEATH VALLEY

A switchback is road that zigzags through mountainous terrain. The term “switchback” dates back to the 1860s, when it applied to zig-zag rail tracks.

Sam’s Club is a warehouse club that is owned and operated by Walmart. It is named after the company’s founder Sam Walton.

The “CSI” franchise of TV shows has been tremendously successful, and seems to really have legs. “CSI: Miami” (the “worst” of the franchise, I think) was canceled in 2012 after ten seasons. “CSI: NY” (the “best” of the franchise) was canceled in 2013 after nine seasons. The original “CSI: Crime Scene Investigation” was set in Las Vegas, and hung in there until 2015 when it ended with a two-hour TV movie. Then there was “CSI: Cyber”. It lasted for two seasons, before being canceled in 2016. “CSI: Vegas”, a sequel to the original “CSI: Crime Scene Investigation”, launched in 2021.