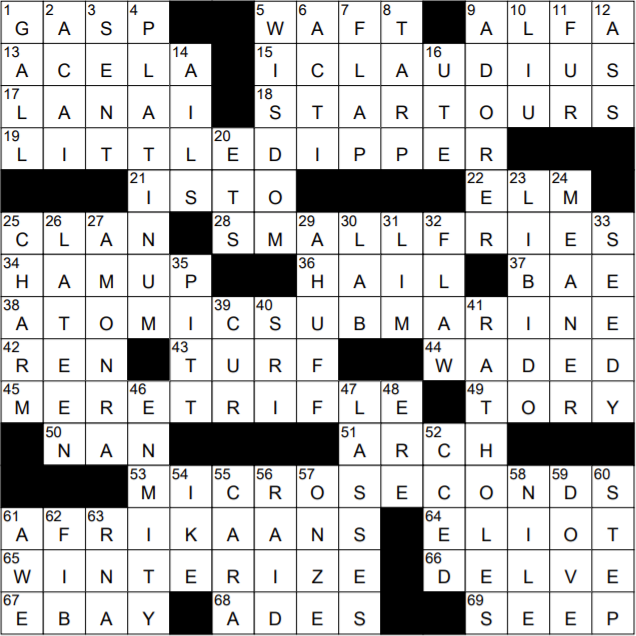 Constructed by: Aaron M. Rosenberg
Edited by: Will Shortz

Today’s Theme (according to Bill): Feast? Nope, a Snack!

Themed answers are common phrases reinterpreted with reference to a meal. The scientist at the party used her shrink ray to “zap” things down in size:

19 At the party where the scientist was demonstrating her new shrink ray, [ZAP!] the punch ladle turned into a … : LITTLE DIPPER

West Elm is an upscale furniture store that is owned by Williams-Sonoma. The chain was founded in 2002.

28 When the appetizers were passed around, [ZAP!] the potato wedges turned into … : SMALL FRIES

Juvenile fish that have just grown to the point where they can feed themselves are known as “fry”. By the end of the 17th century, the phrase “small fry” was common, when referring to such fish. More recently, the phrase was applied figuratively to insignificant people, and then to little children.

38 When the main course was ready, [ZAP!] the six-foot hoagie turned into an … : ATOMIC SUBMARINE

45 When the dessert was brought out, [ZAP!] the pudding cake turned into a … : MERE TRIFLE

Trifle is a splendid dessert from England comprising layers of sponge soaked in sherry, fruit, custard and whipped cream. The sponge and fruit is usually suspended in jello. The Italian version of the same dessert is known as “zuppa inglese”, which translates from Italian as “English soup”.

Boris Johnson is a larger-than-life Conservative politician in the UK, and former Mayor of London. He was the very visible frontman in the campaign for the UK to exit the European Union, the so-called Brexit campaign. As a result of the UK voting to exit the EU, Prime Minister David Cameron resigned, to be replaced by Theresa May. Theresa May then appointed Boris Johnson as Foreign Secretary. Almost inevitably, Boris Johnson then replaced May as Prime Minister. In more recent times, Johnson famously made light of the coronavirus pandemic and ignored calls for social distancing. He then fell ill with COVID-19, ended up in an intensive care unit, and ultimately revised his advice about social distancing. Oh, and the media sometimes refer to Johnson as “BoJo”.

We use “arch-” to mean “chief, principal”. Said prefix comes from the combining form of the Greek word “arkhos” meaning “chief, lead, commander”.

61 Language that gave us “aardvark” : AFRIKAANS

Afrikaans is a language spoken mainly in South Africa that was introduced there by Dutch settlers in the 18th century. The original settlers were mainly from South Holland, so Afrikaans evolved from the Dutch vernacular that they spoke.

16 People for whom a state is named : UTE

The Grinch is the title character in Dr. Seuss’s 1957 children’s book “How the Grinch Stole Christmas!” He is a grouchy creature who lives as a hermit in a cave outside the town of Whoville. The Grinch’s only companion is his dog Max. Based on Seuss’s hero, we now use the term “grinch” for someone who is opposed to Christmas festivities or who is coarse and greedy in general.

27 King of the Egyptian gods : AMON-RA

Our adjective “ramshackle”, meaning “loosely held together, rickety”, seems to be an alteration of the verb “to ransack”, meaning “to search through vigorously, pillage”.

In Italian, “cara” (dear) is a word of “amore” (love) that is spoken “con affetto” (with affection).

58 Home for many hippos : NILE