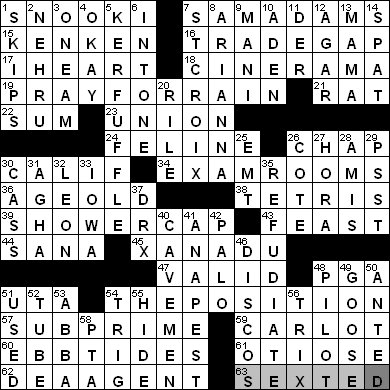 1. TV star who wrote the novel “A Shore Thing,” informally : SNOOKI
Nicole Polizzi is quite the celebrity, known by her nickname of Snooki on the MTV reality television show “Jersey Shore”. Polizzi gets her nickname from “Snookie” in the film “Save the Last Dance”, a name she was given in middle school because she was the first in her group of friends to kiss a boy.

7. Bass alternative : SAM ADAMS
Sam Adams beers are named in honor of the American patriot who played a role in the American Revolution and the Boston Tea Party. Samuel Adams came from a family associated the brewing industry, mainly involved in the production of malt.

The red triangle on the label of a bottle of Bass Ale was registered in 1875 and is UK Registered Trade Mark No: 00001.

15. Diversion also called MathDoku : KENKEN
KenKen is an arithmetic and logic puzzle invented quite recently, in 2004 by a Japanese math teacher named Tetsuya Miyamoto. “Ken” is the Japanese word for “cleverness”.

18. Movie format of old : CINERAMA
Cinerama is a wide-screen format that was introduced in some theaters in the fifties. A Cinerama screen is very curved, and it takes three movie projectors simultaneously operating to provide the full image.

30. Its flag features a grizzly bear: Abbr. : CALIF
The original California flag was simply a lone red star on a white background, and was carried by rebels fighting for freedom from Mexican rule in 1836. Ten years later a new flag was used, the original Grizzly Bear Flag and precursor to today’s state flag. That first use of a bear was in a design by William L. Todd, a nephew of Abraham Lincoln’s wife, Mary Todd.

38. Game in which all pieces have four components : TETRIS
Tetris is a very addictive video game, developed in the Soviet Union in 1984. The name Tetris comes from a melding of the prefix “tetra-”, as all the game pieces have four segments, and “tennis”, a favorite sport played by the developer. Since 2005 there have been more than 100 million copies of the game installed on cell phones alone.

44. Capital near 10-Down : SANA
(10. Former capital near 44-Across : ADEN)
Sana (also Sana’a) is the capital city of Yemen. Within the bounds of today’s metropolis is the old fortified city of Sana where people have lived for over 2,500 years. The Old City is now a World Heritage Site.

48. Green grp.? : PGA
The Professional Golfers’ Association was founded in 1916, and today has its headquarters (unsurprisingly) in Florida, where so many golfers live. Back in 1916, the association was based in New York City.

51. Actress Hagen : UTA
Uta Hagen was a German-born American actress. She married Jose Ferrer in 1938, but they were divorced ten years later after it was revealed that she was having a long-running affair with Paul Robeson. Her association with Robeson, a prominent civil rights activist, earned her a spot on the Hollywood Blacklist during the McCarthy Era. This forced her away from film, but towards a successful stage career in New York City.

59. Eclipse viewing locale? : CAR LOT
The Mitsubishi Eclipse is a sports car that has been in production since 1989, a right-hand-drive vehicle built mainly for Japan and the UK (although I think there are left-hand-drive versions available now). The car was named after an 18th century English racehorse.

62. One making a bust, maybe : DEA AGENT
The Drug Enforcement Administration was set up in 1973 under the Nixon administration.

63. Got a little dirty, in a way : SEXTED
“Sexting” (a portmanteau of “sex” and “texting”) is the sending of explicit dialog, and perhaps images, between cell phones. The term “sexting” was first coined by the UK’s “Sunday Telegraph Magazine” in a 2005 article. Apparently the practice is “rampant” among teens and young adults. Whatever happened to dinner and a movie?

2. P.M. who was father of another P.M. : NEHRU
Jawaharlal Nehru was the very first prime minister of India, serving from 1947-64. Nehru was basically the heir to his mentor, Mahatma Gandhi. Nehru’s only daughter, Indira, also became prime minister (known as Indira Gandhi, though she was no relation to Mahatma).

3. What the ringing of two bells might signal on a ship : ONE AM
On board a seagoing vessel, there is a system of watches, when a specific compliment of the crew is on duty. Most of the watches last for four hours (the exception are the two dog watches, that last for two hours each). During each watch, the ship’s bell is sounded every 30 minutes, starting with “one bell” thirty minutes into the watch, and finishing with eight bells that signals the end of the watch.

7. Popular tropical destination : ST CROIX
Saint Croix has been ruled by a number of countries, most recently the US. The first colonists were the Spanish, who named the island Santa Cruz. After Britain and the Netherlands, the French took over control of the island, and named it Saint Croix. Both Santa Cruz and Saint Croix can be translated into English as “Holy Cross”.

10. Former capital near 44-Across : ADEN
(44. Capital near 10-Down : SANA)
Aden is a seaport in Yemen, located on the Gulf of Aden by the eastern approach to the Red Sea. Aden has a long history of British rule, from 1838 until a very messy withdrawal in 1967.

12. Culture medium : AGAR
Agar is a jelly extracted from seaweed that has many uses. It is found in Japanese desserts, and can also be used as a food thickener or even as a laxative, and it is the most common medium used for growing bacteria in Petri dishes.

13. With 30-Down, “Dream a Little Dream of Me” singer : MAMA
(30. See 13-Down : CASS)
Cass Elliot was one of the four singers in the Mamas and the Papas, the sensational group from the sixties. She was performing sold-out concerts in London in 1974 when she was found dead one morning, having had a heart attack. She was only 32 years old. Eerily, she died in the same flat (on loan from Harry Nilsson) in which the Who’s drummer, Keith Moon, would die just four years later.

26. Sheep shelter : COTE
The Old English word “cote” was used for a small house. Our modern word “cottage” comes from “cote”, as does “cote”, the word for a small shelter on a farm for sheep or birds.

27. Wedding ring? : HORA
The hora is a circle dance that originated in the Balkans. It was brought to Israel by Romanian settlers, and is often performed to traditional, Israeli folk songs. The hora (also horah) is a regular sight at Jewish weddings.

31. Old Turkish title : AGHA
An aga, or agha, is a title that was used by both civil and military officials in the Ottoman Empire.

32. Provincial capital NW of Madrid : LEON
León is a city in the north of Spain, the capital of the autonomous community of Castile and León.

35. 2010 coinage meaning “to reject” : REFUDIATE
Sarah Palin came up with the word “refudiate” on Fox Television in an interview with Sean Hannity in 2010. I guess she got confused between “refute” and “repudiate”. I can’t say anything, because I mispronunciate words all the time …

37. Bogart’s only horror film title role, 1939 : DR X
“The Return of Doctor X” is a 1939 science-fiction/horror film starring Humphrey Bogart in the title role. Bogie never made another horror movie, and didn’t like to talk about this one as he thought it was one of the worst films he made.

40. Troglodytes : CAVEMEN
“Troglodyte” is a Greek word that translates literally as “one who creeps into holes”. We use it to mean “a caveman”.

41. “Au revoir,” for example : ANAPEST
Anapest is the name given to a metrical foot in poetry, which has two short syllables followed by one long syllable. Indeed, the name “anapest” is a good example, when pronounced an-a-pest. Here is a better example, of a verse using anapest, so let’s all say it out loud together! “‘Twas the night before Christmas and all through the house”.

42. Alto preceder : PALO
The city of Palo Alto, California takes its name from a specific redwood tree called El Palo Alto (Spanish for “the tall stick”) that is located within the bounds of the city. The tree is 110 feet tall and over a thousand years old.

46. Popular hangouts in the late ’70s : DISCOS
Discotheques started up during WWII in Occupied France. American-style music (like jazz and jitterbug dances) were banned by the Nazis, so French natives met in underground clubs that they called discotheques, where records were often played on just a single turntable. After the war, these clubs came out into the open. One famous Paris discotheque was called “Whiskey a Gogo”, and its method of operation, with non-stop music from two turntables next to a dance-floor, this spread around the world.

53. Group whose name combines the first letters of its members’ names : ABBA
I am an unapologetic fan of ABBA’s music. ABBA was of course the Swedish group that topped the charts in the seventies and eighties. The name ABBA is an acronym formed using the first letters of the given names of each of the band members, namely: Agnetha, Benny, Bjorn and Anni-Frid.

54. Palin boy : TRIG
Trig is the youngest child of Sarah and Todd Palin, born in 2008. Trig is the child who was prenatally diagnosed with Down syndrome. Trig’s older brother is called Track, and his nephew is called Tripp. Trig, Tripp and Track … that’s got to be confusing …

56. General Mills offering : TRIX
Trix is a corn-based breakfast cereal that has been around since 1954, produced by General Mills. Ads for the cereal featured Trix Rabbit, who would try hard to get hold of bowls of the cereal. He would always get caught though, and be admonished with, “Silly rabbit, Trix are for kids!” With 46% sugar content, the rabbit probably wouldn’t have liked it anyway …