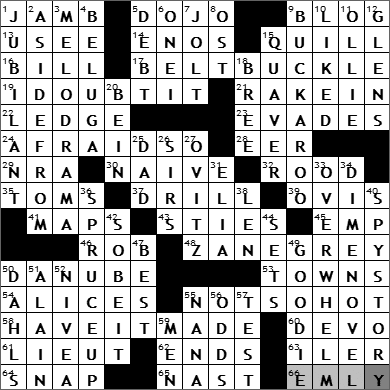 
Today’s Wiki-est, Amazonian Googlies
Across
1. Frame part : JAMB
A door jamb is the vertical portion of a door frame. The term “jamb” comes from the French word “jambe” meaning “leg”.

5. Chopping center? : DOJO
There might be a few karate chops at the dojo.

The Japanese word dojo literally means “place of the way”. Originally the term applied to training halls that were found in or beside temples. The teaching in a dojo was not limited to the martial arts, but in the Western world we use the dojo as the name for a training facility for judo, karate and the like.

“Blog” is a melding of the words “Web” and “log”. This blog is a “log” of all the New York Times Crosswords published, and I post them on the “Web”.

13. One for whose benefit a legal suit is brought : USEE
I guess a usee is one who is used …

14. Hazzard County deputy : ENOS
Enos Strate (played by Sonny Shroyer) was the small-town deputy in the original series of “The Dukes of Hazzard”, and the success of his character merited a follow-on show. The spinoff “Enos” only ran for 18 episodes though.

28. Weapon lengthener? : -EER
A weaponeer is someone associated with the maintenance of weapons, especially nuclear weapons.

32. Cross : ROOD
A rood is a crucifix that specifically symbolizes the cross on which Jesus was crucified.

37. Private practice? : DRILL
Privates in the army are drilled all the time.

45. Titus, e.g.: Abbr. : EMP
Titus Flavius Verspasianus was a successful military commander, and Roman Emperor from 79 to 81 AD. It was Titus who laid siege to and destroyed the city and temple of Jerusalem, for which he was honored with the erection of the Arch of Titus that stands in Rome to this day.  The Arch of Titus is the inspiration for many other famous arches around the world, including the l’Arc de Triomphe in Paris.

48. Western master : ZANE GREY
Zane Grey sure did hit on the right niche. He wrote romanticized western novels and stories that really lent themselves to the big screen in the days when westerns were very popular movies. Incredibly, 110 films were made based on his work.

50. Inn’s end : DANUBE
The Inn is a river that flows through Switzerland, Austria and Germany, emptying into the Danube. The two rivers meet at the city of Passau in Bavaria.

61. Second in cmd. : LIEUT
The word “lieutenant” come from French, with “lieu” meaning “in place” and “tenant” meaning “holding”. “Lieutenant” then means somebody holding a position in the absence of his or her superior. In America of course “lieutenant” is pronounced loo-tenant, whereas back in the British Isles we say “lef-tenant”.

63. Player of one of TV’s Sopranos : ILER
Robert Iler’s most famous role was that of A.J., son of the main character in HBO’s “The Sopranos”, mob leader Tony Soprano. Apparently Iler’s screen persona has spilled over to his personal life, as he was arrested for armed robbery of two tourists in 2001 (and pleaded guilty to a lesser charge).

65. Noted elephant designer : NAST
Thomas Nast was an American caricaturist and cartoonist. He was the creator of the Republican Party elephant, the Democratic Party’s donkey, Uncle Sam and the image of the plump and jocular Santa Claus that we use today.

Down
3. Soap ingredient? : MELODRAMA
As almost everyone knows, the original “soap operas” were radio dramas back in the fifties. Given the structure of society back then, the daytime broadcasts were aimed at housewives working in the home. For some reason, the sponsors of those radio shows, and the television shows that followed, were soap manufacturers, like Procter & Gamble, Colgate-Palmolive and Lever Brothers. And that’s how the soap opera got its nickname.

4. Prized caviar : BELUGA
Beluga caviar comes from the beluga sturgeon, found primarily in the Caspian Sea. It is the most expensive type of caviar in the world. The US-farmed beluga caviar

pictured here (8 ounces) can be purchased through Amazon.com for just over $850, in case you’re feeling peckish …

9. Wrangler : BUCKAROO
The American English word “buckaroo”, an alternative for “cowboy”, comes from the Spanish for cowboy, “vaquero”.

11. Dragon puppet : OLLIE
“Kukla, Fran and Ollie” was an early television show that aired from 1947-1957. Kukla and Ollie (Oliver J. Dragon) were puppets and Fran was Fran Allison, usually the only human on the show.

20. Summer of Love prelude : BE-IN
Just before 1967’s Summer of Love in the Haight-Ashbury district of San Francisco, a Human Be-In was held in the city’s Golden Gate Park. The Be-In is described as a “happening”, a gathering triggered by a new state law banning the use of LSD. The name “Human Be-In” comes from “humanist sit-in”.

Sir Patrick Stewart is most famous perhaps for playing Captain Jean-Luc Picard in “Star Trek: The Next Generation”. Stewart’s Hollywood career became so successful that he moved from the UK to Los Angeles, but he returned to his homeland in 2004. He stated at the time he was homesick, and wanted to get back to playing roles in the theater.

27. 1990s Disney chief : OVITZ
Michael Ovitz was President of the Walt Disney Company from 1995-1997. He didn’t get on well with the company Chairman, Michael Eisner, so he was fired after just over a year. He was sent packing with a nice severance package though: $38m in cash and well over $100m in stock.

31. “Grace Before Meat” pen name : ELIA
The “Essays of Elia” began appearing in “London Magazine” in 1820, and were immediate hits with the public. The author was Charles Lamb, and “Elia” was actually a clerk with whom Lamb worked. The most famous of the essays in the collection are probably “Dream-Children” and “Old China”.

38. Singer Barry : LEN
Len Barry is a retired singer, originally the front man for a group called the Dovells, formed by friends in high school. After recording a number of hits with the Dovells, Barry had a successful solo career.

44. Completists’ goals : SETS
A completist is a person who loves collecting memorabilia.

Roald Dahl’s name is Norwegian. Dahl’s parents were from Norway, although Dahl himself was Welsh. Dahl became one of the most successful authors of the twentieth century, and a couple of his most famous titles are “James and the Giant Peach” and “Charlie and the Chocolate Factory”.

51. Chef Ducasse : ALAIN
Alain Ducasse is a chef, whose most famous restaurant is called Alain Ducasse at The Dorchester, located in the celebrated hotel in London. Ducasse was born and lived in France, but a few years ago relinquished his French citizenship to become a citizen of Monaco, taking advantage of the principality’s lower income tax rate.

Oil of Olay was developed in South Africa in 1949. When it was introduced internationally, it was given slightly different brand names designed to appeal in the different geographies. In Ireland we know it as Oil of Ulay, for example, and in France it is Oil of Olaz.

59. Checkers, e.g. : MEN
Checkers, yet another word that I had to learn moving across the Atlantic. In Ireland the game is called draughts.