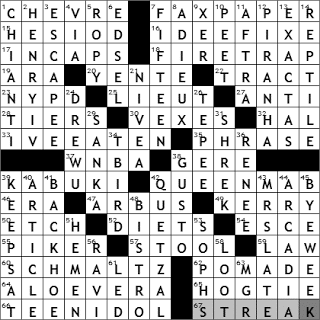 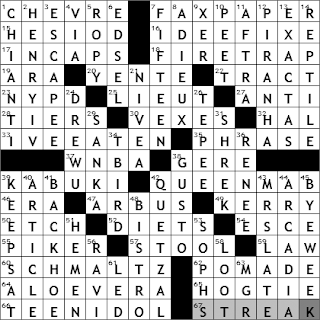 1. Goat cheese : CHEVRE
“Chèvre” is a goat cheese, taking its name from “chèvre”, the French word for “goat”.

15. Ancient “Works and Days” poet : HESIOD
Hesiod was a poet from Ancient Greece, often compared with another famous Greek poet, Homer. Hesiod’s most famous poem is probably “Works and Days”, a piece based on the principles that labor is the lot of man, and those willing to work will get by. It’s not a short poem, about 800 verses long.

16. Thought one can’t shake : IDEE FIXE
An idee fixe (a French term) is basically a fixed idea, an obsession.

19. Constellation next to Pavo : ARA
The constellation of Ara takes its name from the Latin word for “altar”.

20. Broadway role for Bea Arthur : YENTE
Actress Bea Arthur’s most famous roles were on television, as the lead in the “All in the Family” spin-off, “Maude”, and as Dorothy Zbornak in “The Golden Girls”. She also won a Tony for playing Vera Charles on stage in the original cast of “Mame” in 1966, two years after she played the matchmaker, Yente, in the original cast of “Fiddler on the Roof”.

22. Milton’s “Areopagitica,” e.g. : TRACT
“Areopagitica” is the text of a speech given by the English author John Milton, in which he advocates freedom of expression and speaks out again censorship. “Areopagitica” was published in 1644, when the English Civil War was raging and a conservative Parliament was restricting the rights of individuals.

25. Rank achieved by 49-Across: Abbr. : LIEUT
(49. Biden’s successor on the Senate Foreign Relations Committee : KERRY)
John Kerry enlisted in the Naval Reserve in 1966 and went straight into Officer Candidate School. His first post was as an ensign on a frigate in the Vietnam theater, mainly working on rescue missions picking up downed pilots. He then requested a transfer to Swift boat duty. While serving on Swift boats he was awarded the Silver Star, Bronze Star and three Purple Hearts.

32. Film villain who sings “Daisy, Daisy, give me your answer, do!” : HAL
In Arthur C. Clarke’s “Space Odyssey” (famously adapted for the big screen as “2001: A Space Odyssey”) the computer system that went rogue was called HAL 9000, or simply “HAL”. HAL stands for Heuristically programmed ALgorithmic computer. In the French version of the film, HAL’s name was changed to CARL.

37. Org. with the Sun and Sky : WNBA
The Women’s National Basketball Association includes the Connecticut Sun and the Chicago Sky.

38. First man featured on the cover of the U.S. edition of Vogue : GERE
Richard Gere has played such great roles on the screen, and is a most interesting character off the screen. Gere has been studying Buddhism since 1978, and is a very visible supporter of the Dalai Lama and the people of Tibet.

42. She “gallops o’er a courtier’s nose,” in Shakespeare : QUEEN MAB
In Shakespeare’s “Romeo and Juliet”, Mercutio refers to the fairy known as Queen Mab. It seems that Queen Mab was Shakespeare’s creation, and someone who became popular in subsequent works of literature. For example, she is referred to in Herman Melville’s “Moby Dick”, and in Jane Austen’s “Sense and Sensibility”.

46. Good thing to keep low on a diamond : ERA
The pitching stat, earned run average (ERA), measures how many runs a pitcher tends to give up per nine innings.

47. Diane with a camera : ARBUS
Diane Arbus was photographer famous for producing black & white images of the unusual and less than savory aspects of life. The 2006 movie “Fur” presents a fictionalized account of her life and work, with Nicole Kidman playing Arbus.

55. Tightwad : PIKER
A piker is a cautious gambler, and in more general terms can be a miser, someone very stingy.

59. One might cover lemons : LAW
Long before we associated the term “lemon” with a defective car, it was used to describe defective items in general.

60. Goo : SCHMALTZ
“Schmaltz” is an informal term used to describe things which are excessively sentimental. The word comes from the Yiddish “shmalts”, which means “melted fat”. Indeed, the modern German word for fat or grease is Schmaltz, and it can be used in the same figurative way in that language.

64. So-called “wand of heaven” : ALOE VERA
Aloe vera has a number of names that are descriptive of its efficacy as a medicine. These include the Frist Aid plant, Wand of Heaven, Silent Healer and Miracle Plant.

65. Render helpless : HOGTIE
The hogtie was first used on pigs, and involves the tying together of all four limbs in order to render the animal immobile. On a pig, or any other four legged animal, the limbs are obviously tied in front. To hogtie a human the hands are usually tied behind the back and joined to a rope binding the ankles.

67. Barely risk being arrested? : STREAK
Streaking, running naked in public places, has been around for quite a while. There is an arrest recorded in London in 1799, of a man who ran naked through the streets of London on a bet. The term “streaking” dates back to a mass nude run at the University of Maryland in 1973, when a radio broadcaster used the verb “streaking” to imply that the students were racing by him. The next day, the act of nude-running was reported nationwide as “streaking”.

1. Italian red : CHIANTI
Chianti is a red wine from Tuscany in Italy. Historically it was stored in a characteristically bulbous bottle wrapped in a straw basket, although these days the pragmatists have won the day and regular wine bottles tend to be used.

2. John of Gaunt’s son : HENRY IV
Henry IV of England was one of the Plantagenet kings, the son of John of Gaunt and grandson of Edward III. Henry took over the throne of England in 1399, after deposing King Richard II. When Henry died he was buried not in Westminster Abbey as was the tradition, but in Canterbury Cathedral, making him the only English monarch buried there.

6. Ranger, for one : EDSEL
It was Henry Ford’s son, Edsel, who gave his name to the Edsel brand of automobile, a name that has become synonymous with “failure”.

7. Badminton goal : FIFTEEN
Games of badminton used to be won when a player reached fifteen points, but this was changed in 2006 and now the goal is twenty-one points.

The game of badminton was developed in the mid-1700s by British military officers in India. There was already an old game called battledore and shuttlecock, so the creation of badminton was essentially the addition of a net and boundary lines for play. The game was launched officially as a sport in 1873 at Badminton House in Gloucestershire in England, giving it the name we now use.

9. Disco-era kid : XER
The term Generation X originated in the UK, the name of a book by Jane Deverson. Her book detailed the results of a study of British youths in 1964, contrasting their lifestyle to those of previous generations. It was Canadian author Douglas Coupland who was responsible for popularizing the term, with his more successful publication “Generation X: Tales for an Accelerated Culture”. By the latest accepted definition, Gen-Xers were born between 1961 and 1981.

10. Amanda of “Syriana” : PEET
The actress Amanda Peet studied acting with the celebrated Uta Hagen at Columbia University. She has appeared in a number of successful films including “The Whole Nine Yards” and “Syriana”. I remember her best from what I thought was a great show (but no one seemed to agree!) called “Studio 60 on the Sunset Strip”.

12. One in a dangerous school : PIRANHA
Piranhas are reputed to be able to strip an animal to its bones in seconds, but this is somewhat of a myth. Piranhas are not in fact strict carnivores, and usually are more of a nuisance to fishermen rather than a danger, as they tend to eat bait that has been set to catch other fish. Much of the reputation of the piranha is owed to the description written by President Theodore Roosevelt in his book “Through the Brazilian Wilderness”. President Roosevelt was somewhat hoodwinked though, as local fishermen put on a special “show” for him. They dumped hordes of hungry piranhas into a dammed section of a river and then tossed in a sliced up cow. President Roosevelt was pretty impressed by the orchestrated feeding frenzy.

13. One-two track options : EXACTAS
To win the bet called an exacta, the bettor must name the horses that finish first and second, in the exact order. The related bet called the trifecta requires naming of the first, second and third-place finishers in the right order.

24. Sch. in Madison, N.J. : DREW U
Drew University is a private school, with a theological history. It is named after railroad tycoon Daniel Drew, who donated his estate in Madison, New Jersey for the original seminary, which grew into the school it is today.

26. Brave protector : TEPEE
A tepee (also called a tipi and teepee) is a cone-shaped tent traditionally made from animal hides, and used by the Great Plains Native Americans. A wigwam is a completely different structure, and is often a misnomer for a tepee. A wigwam is a domed structure built by Native Americans in the West and Southwest, intended to be more permanent. The wigwam can also be covered with hides, but more often was covered with grass, reeds, brush or cloth.

29. Kraft Foods brand : SANKA
The first successful process for removing caffeine from coffee involved steaming the beans in salt water, and then extracting the caffeine using benzene (a potent carcinogen) as a solvent. Coffee processed this way was sold as Sanka here in the US. There are other processes used these days, and let’s hope they are safer …

31. 2009 Best Musical nominee : SHREK
Before “Shrek” was a successful movie franchise and Broadway musical, it was a children’s picture book called “Shrek!” authored and illustrated by William Steig. The title “Shrek!” came from the German/Yiddish word Schreck, meaning “fear” or “terror”.

36. French actress Saint-Cyr : RENEE
Renée Saint-Cyr was a French movie actress often seen in comedies and romantic dramas. She had a very long career, starting out in films during the Silent Era and playing her last role in the 1993 movie “Room Service”. Saint-Cyr passed away in 2004, at 99 years-of-age.

40. Time unit : ARTICLE
“Time” is the biggest-selling weekly, news magazine in the world, although newsstand sales are declining as more and more of its readership moves online. When it was first published in 1923, by Briton Hadden and Henry Luce, it was the first weekly news magazine in the country.

42. Creature revered by the Mayans : QUETZAL
The quetzal is a spectacular looking bird, with bright green and red coloring which makes it surprisingly difficult to spot in its woodland habitat. The name “quetzal” translates into English as “large brilliant tail feather”.

44. Pan’s place : ARCADIA
Pan was the god of shepherds in Greek mythology, and lived in the rustic surroundings of Arcadia.

Arcadia was a mountainous region of Ancient Greece, well known for the innocence and contentment of its people who lived a simple, pastoral life. Arcadia has been used ever since as the name of a place offering peace and simplicity.

56. Beatle George studied under him : RAVI
Ravi Shankar is perhaps the most famous virtuoso (to us Westerners) from the world of Indian classical music, and is noted for his sitar playing. Also, Shankar is the father of the beautiful pop singer Norah Jones.