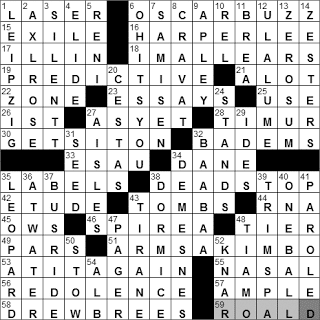 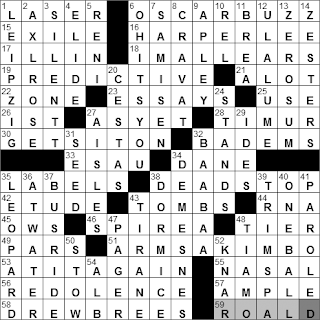 CROSSWORD SETTER: Joon Pahk
THEME: None
COMPLETION TIME: Didn’t finish …
ANSWERS I MISSED: Too many … all in the northeast!

6. It’s generated for high-quality pictures : OSCAR BUZZ
The Academy of Motion Picture Arts and Sciences (AMPAS) is the organization that gives the annual Academy Awards also known as the “Oscars”. The root of the name “Oscar” is hotly debated, but what is agreed is that the award was officially named “Oscar” in 1939.

16. Lifelong friend of Truman Capote : HARPER LEE
Truman Capote grew up in Monroeville, Alabama. There he met, and became lifelong friends with fellow novelist, Harper Lee. Capote was the inspiration for the character “Dill” in Lee’s celebrated work “To Kill a Mocking Bird”. In turn, Harper Lee was the inspiration behind the character “Idabel” in Capote’s “Other Voices, Other Rooms”.

17. Crazy, in rap slang : ILLIN
In the world of contemporary slang (that has left me behind some years ago) “illin” is the opposite of “chillin” apparently. Illin is uncool, not relaxed, a bit crazy perhaps.

26. Follower of Mao : -IST
Mao Zedong was born on December 16, 1893 in the Hunan Province of China. As he was the son of a peasant farmer, his prospects for education were limited. Indeed he left school at age 13 to work on the family farm but did eventually get to secondary school in Changsa, the provincial capital. In the years following he continued his education in Beijing, and actually turned down an opportunity to study in France.

28. King of Tartary in “Turandot” : TIMUR
Puccini never actually finished his celebrated opera “Turandot”. When he died, it was completed by composer and pianist Franco Alfano, making “Turandot” the work with which Alfano is most associated.

32. Bathing resort on the Lahn River : BAD EMS
Bad is the German word for “bath”, and is found in the names of many spa towns such as Bad Ems, Bad Nauheim and Baden-Baden.

33. Issachar’s uncle : ESAU
Esau was the twin brother of Jacob, the founder of the Israelites. When their mother, Rebekah, gave birth to the twins “the first emerged red and hairy all over (Esau), with his heel grasped by the hand of the second to come out (Jacob)”. As Esau was the first born, he was entitled to inherit his father’s wealth (it was his “birthright”). Instead, Esau sold his birthright to Jacob for the price of a “mess of pottage” (a meal of lentils).

42. Exercise done while pedaling : ETUDE
An étude is a small instrumental composition that is usually quite hard to play and is intended to help the performer master a particular technique. Étude is the French word for “study”. Études are commonly performed on the piano, hence the reference to “pedaling” in the clue.

43. Nickname for a Manhattan jail, with “the” : TOMBS
The Manhattan Detention Complex is a jail in Lower Manhattan, known colloquially as “The Tombs”. The nickname has applied to a succession of buildings, starting with the first purpose-built jail on the site, built in 1838. That first structure was designed by one John Haviland who based his design on an ancient Egyptian mausoleum, hence the moniker “The Tombs”.

44. Kind of virus : RNA
A virus is a small, infectious agent, made up of either two or three parts:

– Genetic material, either DNA or RNA
– A protein coat to protect the genetic material
– Possibly a lipid envelope that surrounds the structure while outside the infected cell

46. Meadowsweet : SPIREA
Spirea, also known as Meadowsweet, is too woody to be considered as a food plant, although it has long been used by Native Americans as a herbal tea. Spirea is chock full of salicylates, chemicals that have properties similar to aspirin.

51. Stance of impatience : ARMS AKIMBO
We’re all familiar with the expression “arms akimbo”. Akimbo is such a lovely word, I think, so just I had to look up its etymology. The research failed to dig up anything too exciting though. It seems to stem from Middle English, “in kekbowe” or “on kenbow” meaning “bend in a curve”.

56. Aroma : REDOLENCE
Something that is redolent is aromatic, emits a fragrance. Redolent is an Old French word.

58. Sports Illustrated’s 2010 Sportsman of the Year : DREW BREES
Drew Brees is a quarterback for the New Orleans Saints. On top of his success in the NFL, when he was a youth Brees was an excellent tennis player. In one competition he actually beat a young Andy Roddick who later became the world’s number one.

59. Chemistry Nobelist Hoffmann : ROALD
Roald Hoffmann is a theoretical chemist at Cornell. He was born in Poland and named “Roald” after the Norwegian explorer, Roald Amundsen. Hoffmann is Jewish, and he and his mother were the only members of his family to survive the Holocaust, thanks to the help of neighbors. Hoffmann won the Nobel Prize in Chemistry in 1981.

1. Battle of the Nations site, 1813 : LEIPZIG
The Battle of the Nations was fought in Leipzig in 1813 between Napoleon Bonaparte and the armies of Russia, Prussia, Austria and Sweden. The allied forces defeated Napoleon, forcing him to withdraw to France where he suffered further defeat by invading forces the following year resulting in his abdication and exile to Elba. The Battle in Leipzig involved more than 600,000 soldiers making it the largest battle ever fought in Europe prior to WWI.

4. Drop in speech : ELIDE
To elide is to pass over, omit or slur a syllable when speaking.

7. Its three strings are plucked with a bachi : SAMISEN
A samisen is a traditional Japanese instrument, with three strings, vaguely like a banjo. It is played with a plectrum that is called a bachi.

8. Accessory popularized by Louis XIV : CRAVAT
The cravat originated in Croatia, an accessory used with a military uniform. Cravats were introduced to the fashion-conscious French by Croatian mercenaries enlisted into a regiment of the French army. The English placed a lot of emphasis on the knot used for the cravat, and in the period after the Battle of Waterloo the cravat came to be known as a “tie”. What we now call a tie is still called a “cravate” in French.

9. Marquand title character : APLEY
“The Late George Apley” is a 1937 novel by John Phillips Marquand. It was regarded as Marquand’s first “serious” work, as prior to its publication he was famous for his series of “Mr. Moto” spy novels.

11. City next to Fullerton : BREA
Brea is a city in Orange County, California. Fullerton borders Brea to the southwest.

13. Like games without win-win outcomes : ZERO-SUM
A zero-sum game is one in which the gains of the winner are exactly offset by the losses of the loser. There is no net gain. So, a “win-win” situation by definition cannot be arrived at in a zero-sum game.

20. Court baskets : CESTAS
A cesta is the wicker scoop strapped to the wrist that is used for catching and throwing the ball in jai alai.

Even though jai alai is often said to be the fastest sport in the world (because of the speed of the ball), in fact golf balls often get going at a greater clip.

27. Places for runners : AISLES
A runner is a long, narrow carpet.

34. Lands around mansions : DEMESNES
“Desmesne” is an Anglo-French word in origin, meaning land around a manor reserved for the private use of a feudal lord. It comes from the Latin “dominicus”, meaning “belonging to a lord”.

35. Tiger’s successor, computerwise : LEOPARD
Apple introduced the Mac OS X Operating System in 2000. Each version of this operating system has had a code name, and that code name is always a type of big cat. The versions and code names are:

Interestingly, the earlier beta version was called Kodiak, after the bear.

36. Lee who advised Reagan and Bush : ATWATER
Lee Atwater was a Republican strategist, an advisor to Presidents Reagan and George H. W. Bush, and also a Chairman of the Republican National Committee. Atwater collapsed at a fundraiser for Senator Phil Gramm in 1990, and soon after was diagnosed with a brain tumor. He died a year later, at just 40 years of age.

39. Big name in weight-loss supplements : TRIMSPA
TrimSpa is a dietary supplement touted as a weight loss aid. Its active ingredients are stimulants (like caffeine). It became quite famous when the manufacturers hired Anna Nicole Smith as spokesperson for the product.

40. It’s solid yellow : ONE-BALL
The more correct name for the game of pool is pocket billiards. The name “pool” came after pocket billiards became a common feature in “pool halls”, places where gamblers “pooled” their money to bet on horse races.

41. Like many ex-cons : PAROLED
The term “parole” is a French word that we use in English, with the French “parole” meaning “word, speech”. Of particular interest is the French phrase “parole d’honneur” which translates as “word of honor”. In the early 1600s we started using “parole” to mean a promise by a prisoner of war not to escape, as in the prisoner giving his “word of honor” not to run off. Over time, parole has come to mean conditional release of a prisoner before he or she has served the full term of a sentence.

43. Capital whose central plaza is Skanderbeg Square : TIRANE
Tirane is the capital city of Albania. Tirane was made the capital in 1920. The city was seized by the Nazis in WWII, but was liberated in 1944, at which point the Communists seized power. The Communists were ousted in the elections of 1992 leaving a void that led to much bloodshed, and an eventual EU military mission, led by Italy, to stabilize the capital and the rest of the country. Today things have become so calm that Albania is a member of NATO.

52. Lumber feature : KNAR
“Knar” is another word for a knot or burl on a tree or in wood.