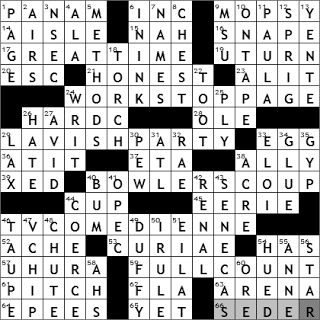 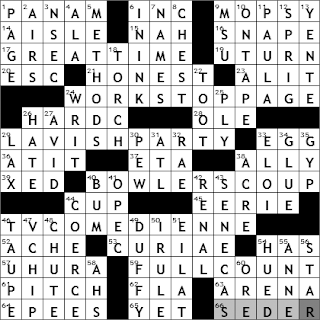 CROSSWORD SETTER: Alan Arbesfeld
THEME: Ball..strike…ball…strike…FULL-COUNT PITCH … all the theme clues lead up to the full-count pitch in baseball:

1. Former TWA rival : PAN AM
Pan Am started out as a mail and passenger service between Key West, Florida and Havana, Cuba in 1927. From very early in the company’s life it was the de facto representative air carrier of the United States. For many years Pan Am’s fleet was built around the Boeing 314 Clipper, a long-range flying boat that was one of the largest aircraft around at the time. Pan Am adopted the Clipper as part of its image, even using “clipper” as the call sign for its flights.

6. Ltd., here : INC
In Britain and Ireland the most common type of business (my perception anyway) is one which has private shareholders whose liability is limited to the value of their investment. Such a company is known as a private limited company, and has the letters “Ltd” after the name. If the shares are publicly traded, then the company is a public limited company, and has the letters “plc” after the name.

9. Beatrix Potter bunny : MOPSY
Beatrix Potter was an English author, famous for the children’s books she wrote and illustrated. The most famous character in her stories was Peter Rabbit, whose sisters were Flopsy, Mopsy and Cottontail. Potter put her talent as an artist to good use in the scientific world as well. She recorded many images of lichens and fungi as seen through her microscope. As a result of her work, she was respected as an expert mycologist.

16. Hogwarts potions professor : SNAPE
Severus Snape is a character in the Harry Potter novels, played by the wonderful Alan Rickman on the big screen.

45. Like Rod Serling’s stories : EERIE
Rod Serling is of course the man behind, and in front of, the iconic science-fiction TV series “The Twilight Zone”. Serling used a lot of the shows he created to advance his strongly held views against war (he was a soldier in WWII), and against racism.

46. Ball : TV COMEDIENNE
Lucille Ball was at the height of her success while she was married to Desi Arnaz. The couple met in 1940 and not long afterwards eloped. Lucy had several miscarriages before she gave birth to her first child in 1951, just one month before her fortieth birthday. A year and a half later, while “I Love Lucy” was garnering large audiences, she became pregnant with her second child, a pregnancy that was written into the television show’s script. In fact, the day that Lucy gave birth on the show, was the same day that she gave birth in real life.

57. Kirk subordinate : UHURA
Lt. Nyota Uhura was the communications officer in the original “Star Trek” television series, played by Nichelle Nichols. The role was significant in that it was one of the first African American characters to figure front and center in American television. In a 1968 episode Kirk (played by William Shatner) and Uhura kiss, the first inter-racial kiss to be broadcast in the US. Apparently the scene was meant to be shot twice, with and without the kiss, so that network executives could later decide which version to air. William Shatner says that he deliberately ran long on the first shoot (with the kiss) and fluffed the hurried second shoot (without the kiss), so that the network would have no choice.

64. Pentathletes’ weapons : EPEES
The French word for sword is épée.

Down
3. Minuscule part of a min. : NSEC
A nanosecond is more correctly abbreviated to “ns”, and really is a tiny amount of time … one billionth of a second.

8. Booty holder : CHEST
Booty, meaning plunder or profit, is derived from the Old French word “butin” which has the same meaning.

9. The Spartans of the N.C.A.A. : MSU
Michigan State University’s athletic team is known as the Spartans.

11. Journalist Zahn : PAULA
Paula Zahn resigned as an anchor with CNN in 2007. Outside of her work in journalism, Zahn is an accomplished cellist and has played at Carnegie Hall with the New York Pops Orchestra.

13. “Fiddler on the Roof” matchmaker : YENTE
Yenta (Yente) is actually a female Yiddish name. In Yiddish theater it came to mean a busybody.

24. Habeas corpus, e.g. : WRIT
The Latin term habeas corpus translates literally as “you are to have the body”, and is a legal action (i.e. a writ) that is used to release a prisoner from unlawful detention.

29. Far from harsh : LAX
Long before the word “lax” was used to mean loose in terms of rules and discipline, it was used solely to mean “loose” as in “loose bowels”. Yep, lax has the same root as “laxative” …

30. Nave seat : PEW
In large, Christian churches, the nave is the main approach to the altar, where most of the faithful are seated.

32. “Norma ___” : RAE
“Norma Rae” is a 1979 movie starring Sally Field, a tale of union activities in a textile factory in Alabama. The film is based on the true story of Crystal Lee Sutton told in a 1975 book called “Crystal Lee, a Woman of Inheritance”.

33. Morlocks’ victims in an H. G. Wells story : ELOI
In the 1895 novel by H. G. Wells “The Time Machine”, there were two races that he encountered in his travels into the future. The Eloi are the beautiful people that live on the planet’s surface, while the Morlocks are a race of cannibals living underground who use the Eloi as food.

41. Cartel acronym : OPEC
The OPEC cartel (the Organization of the Petroleum Exporting Countries) was formally established in 1960 and has been headquartered in Vienna since 1965. The US is actually the third largest oil producer in the world (after Russia and Saudi Arabia). One reason America isn’t in OPEC, even though we are a big producer, is that we import a lot more than we export. But you probably knew that already …

43. New York tribe members : SENECAS
The Seneca nation’s name came from their principal village of Osininka. There is no link at all with Seneca the famous Roman statesman, and the similarity in name is just a coincidence.

46. Hosiery shade : TAUPE
Taupe is a dark, gray-brown color. The name “taupe” comes from the Latin name of the European Mole, which has skin with the same color.

47. Modern screening device : V-CHIP
All television sets produced for the US market since the year 2000 have to include a component called a V-chip. A V-chip allows a TV to be configured so that programming of specific “ratings” can be blocked from viewing. The “V” in V-chip stands for “viewer control”. It sounds like a great idea, but a lot of kids these days quickly do a search online and work out how to reset the password.

49. Julia of “Designing Women” : DUFFY
Julia Duffy’s most famous role was the spoiled rich girl who worked as a maid in the Vermont inn run by Bob Newhart in the great television show from the eighties called “Newhart”.

51. Israeli seaport : EILAT
Eilat the most southerly city in Israel, sitting right at the northern tip of the Red Sea, on the Gulf of Aqaba.

66. Meal with the Four Questions : SEDER
The Passover Seder is a ritual feast that marks the beginning of the Jewish Passover holiday, celebrating the liberation of the Israelites from slavery in Egypt. One of the traditions at the meal is that the youngest child at the table asks “The Four Questions”, all relating to why this night is different from all other nights in the year:

Yuu can learn more about the questions (and answers) here.