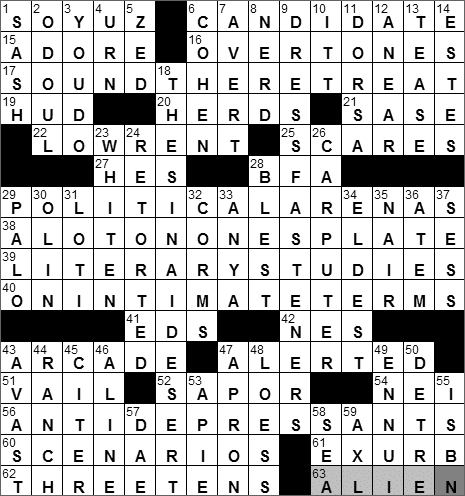 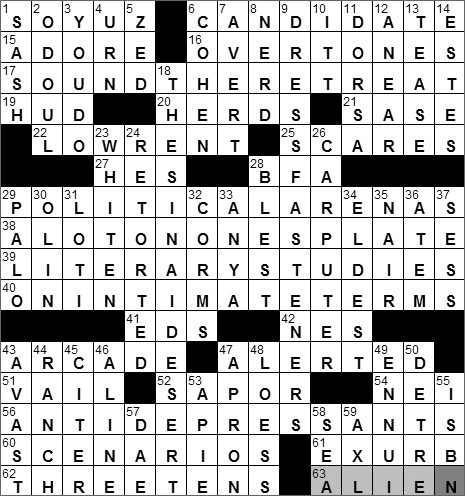 1. Cosmonaut’s craft : SOYUZ
The Russian Soyuz space program started in the early sixties as part of a plan to land a cosmonaut on the moon. The Soyuz program is still alive and kicking, and derivatives of those early spacecraft designs from the sixties are regularly visiting the International Space Station. “Soyuz” is a Russian word meaning “union”.

19. Cabinet dept. since 1965 : HUD
The Department of Housing and Urban Development (HUD) has its roots in the “Great Society” program of President Lyndon Johnson. HUD’s mission is to address the housing needs of the citizenry at the national level. HUD can provide mortgage insurance to help people become homeowners and also provide rental subsidies to lower-income families. HUD also is responsible for enforcement of Federal Fair Housing laws.

25. Cows : SCARES
The verb “cow” means to intimidate, to scare. The exact etymology of the term seems unclear.

28. Designer’s deg. : BFA
The degree of Bachelor of Fine Arts is designed for students intent on pursuing a career in the visual or performing arts.

39. Concentration for an English major : LITERARY STUDIES
Literary studies, also called literary criticism, is the evaluation and interpretation of literature.

41. Glamour types, for short : EDS
I’m not sure what “EDS” are in the context of “glamour” … maybe editors of “Glamour” magazine?

51. Colorado’s ___ Mountain : VAIL
The Vail Ski Resort in Colorado is the largest single-mountain ski resort in the whole country. The resort was opened in 1962, basically in the middle of nowhere. It was given the name Vail after Vail Pass which runs by the mountain (now also called Vail Mountain). The town of Vail, Colorado was established four years later in 1966, and now has a population of about 5,000.

52. Food quality : SAPOR
“Sapor” is another word for a flavor, a quality that can be tasted. “Sapor” is the Latin word for “taste, flavor”.

54. Verdi’s “___ giardin del bello” : NEI
“Nei giardin del bello” is an aria from Giuseppe Verdi’s opera “Don Carlos”. The aria is also called the “Song of the Veil”, as it tells of a Moorish King who is enraptured by a veiled beauty before him, who turns out to be his wife that he has been neglecting.

56. They may keep you up : ANTIDEPRESSANTS
The top three antidepressants prescribed in the US (in 2007 anyway) are:

61. Long-distance commuter’s home, maybe : EXURB
As an extension to the term “suburb”, an “exurb” is an area beyond the suburbs at the very outskirts of a city. Often the term exurb is used to denote an area inhabited by more wealthy people.

Down
1. What the narrator “threw up” in “The Night Before Christmas” : SASH
The poem “A Visit from St. Nicholas” was published anonymously in 1823, and is better known today by its first line “‘Twas the night before Christmas”. Most scholars believe that the poem was written by Clement Clark Moore, a theologian from New York City. Others say that it was written by Henry Livingston, Jr. a poet from Upstate New York.

2. Baseball’s Lefty : O’DOUL
Lefty O’Doul was from San Francisco. He owned a restaurant in the city that bears his name and which still operates today (near Union Square). There’s a bridge near AT&T Park, the Giant’s relatively new ball park, that’s called Lefty O’Doul Bridge.

4. Columbarium object : URN
The term “columbarium” comes from the Latin “columba” meaning “dove”, and originally was used for a structure that had small cages to house pigeons and doves. In modern parlance a columbarium is a place where funeral urns can be stored in perpetuity.

6. Ben of Ben & Jerry’s : COHEN
Ben Cohen and Jerry Greenfield did a correspondence course on ice-cream making in 1977 given by Pennsylvania State University’s Creamery. The following year they opened an ice cream parlor in an old gas station in Burlington, Vermont. Today Ben & Jerry’s has locations in over 20 countries around the world, and their’s was the first brand ice-cream to go into space.

10. Onetime owner of Sheraton Hotels : ITT
The Sheraton Hotel chain was started by Ernest Henderson and Robert Moore in 1937. The pair bought a hotel that already had a lighted sign on its roof saying “Sheraton Hotel”, and as it was too big and expensive to change, they decided to adopt the name for the whole chain.

14. Children’s author Eleanor : ESTES
Eleanor Estes started writing children’s books when she was bedridden, recovering from tuberculosis. By the time she died in 1988, she had written 20 books, including one novel for adults. Her most lauded title is “Ginger Pye” published in 1951.

18. Egyptian expanse : THE SINAI DESERT
The Sinai Peninsula is the eastern part of Egypt, the triangular peninsula bounded by the Mediterranean to the north, and the Red Sea to the south. It is the only part of Egypt that lies in Asia as opposed to Africa. The eastern land border of the peninsula is shared with Israel, allowing Israel to occupy the Sinai during the 1956 Suez Crisis and the Six Day War of 1967.

23. Etiolate : WHITEN
One can etiolate a plant by preventing exposure to sunlight. Without light, the plant does not produce chlorophyll so the it is white instead of green. One example of a crop grown this way is asparagus. White asparagus shoots are highly prized in northern Europe, and command a hefty premium in price.

26. Hi-tech auto device : CARPUTER
I remember the days when I used to be able to fix my own car, and then along came carputers, computers installed in automobiles …

29. ___ Pinto (Texas county or its seat) : PALO
The town of Palo Pinto was founded at the geographic center of Palo Pinto County when it was established in 1856. The community started to grow but was dealt a devastating blow when the railroad bypassed the town in 1880. Today Palo Pinto is one of the smaller towns in the county with a population of just over 400, but it is still the county seat.

30. Lena of “Havana” : OLIN
Lena Olin is a Swedish actress, discovered by Ingmar Bergman. Her most famous performance was in “Chocolat” released in 2000, and then she won an Emmy in 2003 for Best Supporting actress in the TV show “Alias”.

31. French novelist Pierre : LOTI
Pierre Loti was a French writer, and also an officer in the French Navy.

34. Cain, e.g. : ELDEST
According to the Book of Genesis in the Bible, after Cain murdered his younger brother Abel he fled to the Land of Nod, located “east of Eden”, which is the source for the title of John Steinbeck’s celebrated novel “East of Eden”.

35. Shaving alternative : NAIR
Nair is a hair removal product that has some pretty harsh ingredients. The most important active constituents are calcium hydroxide (“slake lime”) and sodium hydroxide (“caustic soda”). The balance of the ingredients seem to be there to soothe the skin after the harsher chemicals have done their job. The name “Nair” probably comes from combining “no” and “hair”.

43. Sailor’s stopper : AVAST
Avast is a nautical term, used to tell someone to stop or desist from what they are doing. The word comes from the Dutch “hou vast” meaning “hold fast”.

44. Russian alternative : RANCH
Ranch dressing has been the best selling salad dressing in the country since 1992. The recipe was developed in Alaska by Steve Henson, who introduced it in the fifties to the guests on his dude ranch, Hidden Valley Ranch in Northern California. His ranch dressing was so popular he opened a factory to produce packets of ranch seasoning that could be mixed with mayonnaise and buttermilk. Henson sold the brand for $8 million in 1972.

45. Bartlett, notably : CITER
“Bartlett’s Familiar Quotations” is a famous reference work containing tons of quotations. Bartlett’s was first issued in 1855, and as such is the longest-lived collection of quotations that we have available to us todqay. The book started as a private list of quotes gathered by John Bartlett who ran the University Book Store in Cambridge, Massachusetts. He kept the list as he was always being asked  by customers, “Who said …?”.

47. Part of a stage : APRON
The apron of a stage (if it has one) is that part which projects out into the audience.

48. Good earth : LOESS
Loess is a wind-blown accumulation of silt. The word is German in origin and was first used to describe the silt along the Rhine Valley.

49. Boredom : ENNUI
Ennui is the French word for boredom, that we now readily use in English. It’s one of the few French words we’ve imported that we haven’t anglicized and actually pronounce “correctly”.

53. Tom T. Hall’s “Mama Bake ___” : A PIE
“Mama Bake a Pie” is a song by country singer Tom T. Hall. Hall is sometimes called “The Storyteller” as his songs tend to have quite the narrative.

55. Novel ID : ISBN
The International Standard Book Number (ISBN) was invented by one Gordon Foster, who now is a professor at Trinity College, Dublin in Ireland. The code was originally developed for booksellers, so that they had a unique number (and now a bar code) for each publication.

57. Daniel ___ Kim of “Lost” : DAE
Daniel Dae Kim is an American actor, famous for playing Jin-Soo Kwon on “Lost”. He now plays one of the leads on the CBS remake of “Hawaii Five-O”, portraying the character Chin Ho Kelly.