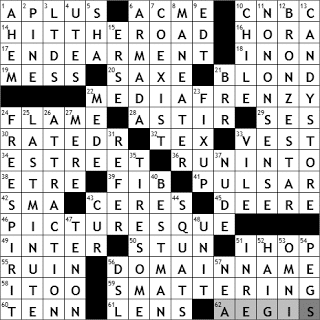 Today’s Wiki-est, Amazonian Googlies
Across
6. Ne plus ultra : ACME
“Ne plus ultra” is French for “no more beyond”, and means just that in English, the high-point.

The “acme” is the highest point coming from the Greek “akme”, which has the same meaning.

10. “Squawk Box” airer : CNBC
“Squawk Box” is a business news show that airs on CNBC on weekday mornings. The name comes from a device used in brokerage houses, a permanently open intercom that is used to communicate stock transactions.

16. Ring event after exchanging rings : HORA
The hora is a circle dance that originated in the Balkans. It was brought to Israel by Romanian settlers, and is often performed to traditional, Israeli folk songs. The hora (also horah) is a regular sight at Jewish weddings.

19. Sustenance for a fatigued person? : MESS
A “fatigued” person, someone in uniform, often eats in the mess.

“Mess” first came into English about 1300 and described the list of food needed for a meal, from the Old French word “mes” which was a portion of food, or a course at a meal. This usage in English evolved into “mess” meaning a jumbled mass from the concept of “mixed food”. At the same time, the original usage in the sense of a food for a meal surfaced again in the military in the 1500s where a “mess” was a communal eating place.

20. Name in old German duchies : SAXE
Saxony was the name given at different times in history to states along the Elbe river in central Europe. As the various states broke up, they spawned many duchies that retained the name “Saxe”, the most famous probably being Saxe-Coburg and Gothe, two united duchies in Germany that ceased to exist after WWII. A notable branch of the Saxe-Coburg and Gothe House is the British Royal Family, as Queen Victoria was married to Prince Albert of Saxe-Coburg and Gothe. King George V changed the name of the family to the House of Windsor in a politically sensible move during WWI.

29. Parisian possessive : SES
SES is the French for “their”.

30. Like “10,” but not “9” : RATED R
“10” is a fun, romantic comedy released in 1979, starring Dudley Moore, Bo Derek and Julie Andrews. Famously, the movie made stars of Moore and Derek, as well as popularizing Ravel’s marvelous piece of music, “Boléro”.

“9” is a science fantasy film released in 2009. It is a computer-animated work, a feature-length movie based on a short film of the same name released in 2005. It has quite the cast of voice actors, including Elijah Wood and Jennifer Connelly.

32. Puncher’s nickname : TEX
“Cowpuncher” is another name for a cowboy.

34. Boss’s address? : E STREET
The E Street Band is the backing group for Bruce Springsteen (“the Boss”). The band came together in 1972 but didn’t take a formal name until two years later. The keyboard player in the original line up was David Sancious, and his mother allowed the group to rehearse at her home. That home was on E Street in Belmar, New Jersey, and that’s where the band got their name.

38. “Fusses” is a form of it : ETRE
“Tu fusses” is what’s called the imperfect subjunctive tense in French, of the verb “être” (to be). An example of its use is:

I left so that “you would be” in charge …

41. Heavenly radio source : PULSAR
A pulsar is a rotating neutron star that emits a beam of electromagnetic radiation. As the beam is not emitted in all directions, it is only seen from Earth when at particular rotations, creating a cycle of pulsed gamma rays, known as the lighthouse effect.

42. Like a Scottish young ‘un : SMA
The Scots dialect word sma’ means “small”. It famously appears in the Robert Burns poem, “To a Mouse”. The lines read:

43. Asteroid belt orbiter : CERES
Ceres is the smallest dwarf planet in our solar system. It was discovered in 1801 and the largest body orbiting in the asteroid belt. For fifty years Ceres was classified as the eighth planet circling our sun.

45. Harvester maker : DEERE
John Deere invented the first commercially successful steel plow in 1837. Prior to Deere’s invention, farmers used an iron or wooden plow that constantly had to be cleaned as rich soil stuck to its surfaces. The cast-steel plow was revolutionary as its smooth sides solved the problem of “stickiness”.

56. E-tail detail : DOMAIN NAME
A domain name is basically the address of a website on the Internet. Not too long ago I moved this website to a new address (from puzzle.paxient.com to NYTCrossword.com). Like in the real world, one pays for an address. I now own (well rent!) both of the addresses used for this blog, but choose to “do business”, publish the blog, at the more memorable address … NYTCrossword.com. It’s sort of like preferring to have a Park Avenue address instead of one on say Elm Street. In the Internet world, the address is intended to indicate what type of activity goes on at a particular address. So an address with “.com” implies a “company” website, a “.org” implies a non-profit website and “.edu” implies an education website. But, in reality anyone can rent whatever address they want, as it just goes to the highest bidder. Most folks remember “.com” addresses, so they are the most popular. “.com” is meant to imply a “business address” as I say, but it can even be used to chat about crosswords!

58. Poem referencing “the darker brother” : I, TOO
Langston Hughes was a poet active in the Harlem Renaissance, and someone who helped develop the literary form known as “jazz poetry”. His poem “I, Too, Sing America” was published in 1925.

59. Modicum : SMATTERING
A modicum is a small portion, with “modicum” coming into English from Latin, via Scottish. “Modicum” is Latin for “a little”.

60. Volunteer’s place: Abbr. : TENN
Tennessee uses the nickname “Volunteer State” as during the War of 1812 volunteer soldiers from Tennessee fought with valor, especially during the Battle of New Orleans.

62. Backing : AEGIS
Someone is said to be under the aegis of someone else (for example) if that other person provides protection, or perhaps sponsorship. The word “aegis” comes from the Greek word for a goat (“aigis”), the idea being that the goatskin shield or breastplate worn by Zeus or Athena, gave some measure of protection.

Down
3. Old Fords : LTDS
There has been a lot of speculation about what the acronym LTD stands for in the car model “Ford LTD”. Many say it stands for Luxury Trim Decor, and others that it is an abbreviation for “limited”. Well, it turns out that LTD was chosen as just three meaningless letters that sound good together.

4. Mountain West team : UTES
The Runnin’ Utes are the basketball team of the University of Utah. The team was given the nickname the Runnin’ Redskins back when Jack Gardner was the head coach, from 1953 to 1971. The “Runnin'” part of the name was chosen because Gardner was famous for playing quick offenses. The “Redskins” name was later dropped in favor of the less offensive “Utes”.

9. It starts in Mar. in D.C. : EDT
On the other side of the Atlantic, Daylight Saving Time (DST) is known as “summer time”. The idea behind summer/daylight-savings is to move clocks forward an hour in spring and backwards in the fall, so that afternoons have more daylight.

10. Its flag is red, white and blue : CHILE
The national flag of Chile has two horizontal bars, red and white, and a single white star on a blue background in one corner. So the flag is known as “La Estrella Solitaria” (The Lone Star).

12. Award won by Henry Fonda : BRONZE STAR
Henry Fonda had already started his Hollywood career when along came WWII. Fonda enlisted in the Navy, and served for three years on the destroyer USS Satterlee. Then he served as a Lieutenant Junior Grade in Air Combat Intelligence in the Pacific, earning the Bronze Star.

22. Member of an extensive empire of the seventh century B.C. : MEDE
The Medes were an ancient people that lived in what is now northwestern Iran. The Medes held sway in the region only for about 60 years, until Cyrus the Great came along and defeated Astyages, the king of Media (not to be confused with Howard Stern, the self-claimed “king of all media”!).

35. Like a nudnik : TIRESOME
Nudnik is a slang term for a boring and bothersome person. The word comes from Yiddish, with “nuda” being the Polish for “boredom”.

40. Keeper of the rings : BEST MAN
The term “best man” is Scottish in origin, used since the early 1800s replacing “groomsman”.

47. Joint part : TENON
One simple type of joint used in carpentry is a mortise and tenon, basically a projection carved at the end of one piece of wood that fits into a hole cut into the end of another. The mortice is the “hole” and the tenon the “projection”.

48. Knot, say : UNIT
A knot is a unit of speed equal to one nautical mile per hour. Traditionally a vessel’s speed was determined by using a “chip log”. A chip log is made up of a wooden board attached to a line wrapped around a reel. The line (called a “log-line”) had knots tied in it at uniform spacings. To determine the vessels speed the board was thrown overboard and the line allowed to unroll. The speed was then the “number of knots” paid out in a fixed time interval.

51. Dictator’s start : IN RE
When dictating a memorandum, one might start with “in re”.

53. Westin alternative : OMNI
Omni Hotels & Resorts is headquartered in Irving, California and has properties in the US, Canada and Mexico.

56. Connection letters : DSL
DSL originally stood for Digital Subscriber Loop, but is now accepted to mean (Asymmetric) Digital Subscriber Line. DSL is the technology that allows Internet service be delivered down the same telephone line as voice service, by separating the two into different frequency signals.

57. Grant grp. : NEA
The National Endowment for the Arts is an agency funded by the federal government that offers support and financing for artistic projects. It was created by an Act of Congress in 1965. Between 1965 and 2008, the NEA awarded over $4 billion to the arts, with Congress authorizing around $170 million annually through the eighties and much of the nineties. That funding was cut to less than $100 million in the late nineties due to pressure from conservatives concerned about the use of funds, but it is now back over the $150 million mark