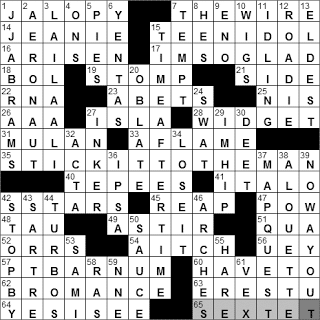 Across
1. One likely to die on the road? : JALOPY
The origins of our word “jalopy” meaning “dilapidated old motor car” seem to have been lost in time, but the word has been around since the 1920s. One credible suggestion is that it comes from Jalapa, Mexico as the Jalapa scrapyards were the destination for many scrapped American automobiles.

7. What something may go down to : THE WIRE
The expression “down to the wire”, meaning “right to the last minute”, comes from the world of horse racing. The finish line at a racetrack used to be marked by a metal thread, “the wire”.

14. Foster girl : JEANIE
Stephen Foster wrote the song “Jeanie with the Light Brown Hair”, first published in 1854. The song became very famous in 1941, in which year there was a strike due to a dispute over licencing fees. Radio broadcasters weren’t allowed to play contemporary tunes during the strike and had to turn to their limited collection of recorded music that was in the public domain, such as “Jeanie”. An article in “Time” magazine at the time remarked about how often “Jeanie with the Light Brown Hair” was being played saying that “she was widely reported to have turned grey”. Good one!

18. Big tin exporter: Abbr. : BOL
Historically, from the Middle Ages, the main source of tin in the world was the mines of Cornwall in the south of England. This changed in the 1800s with the discovery of the “tin belt” in Bolivia. Today Bolivia is the fourth largest miner and producer of tin in the world, after Indonesia, China and Peru. There hasn’t been any mining of any metals in Cornwall since 2007.

22. Kind of replication : RNA
The two most common nucleic acids are deoxyribonucleic acid (DNA) and ribonucleic acid (RNA), both of which play crucial roles in genetics. The DNA contains the genetic instructions used to keep living organisms functioning, and RNA is used to transcribe that information from the DNA to protein “generators” called ribosomes.

The word “abet” comes into English from the Old French “abeter” meaning “to bait” or “to harass with dogs” (it literally means “to make bite”). This sense of encouraging something bad to happen morphed into our modern usage of “abet” to mean aid or encourage someone in a crime.

25. Serbian city where Constantine the Great was born : NIS
Niš is the third largest city in Serbia, and is located in the south of the country.

The American Automobile Association is a not-for-profit organization, focused on lobbying, provision of automobile servicing, and selling of automobile insurance. It was founded in 1902 in Chicago, and published its first hotel guide back in 1917.

27. Luzón, e.g. : ISLA
“Isla” is the Filipino word for “island”, but it’s also the Spanish word. The reference here is to the Spanish, I think, as Luzón is the Spanish spelling for the island of Luzon, the largest of the Philippine islands, home to the capital city of Manila.

31. Film in which Eddie Murphy voices the dragon Mushu : MULAN
“Mulan” is a Disney animated feature released in 1998. The storyline is based on the legend of Hua Mulan, a heroine from Chinese folklore. In the story, Mulan has a guardian dragon called Mushu, voiced by Eddie Murphy.

35. Be revolting : STICK IT TO THE MAN
“The Man” is a slang term used for an authority figure. It might be used to refer to corporate leadership, or perhaps the government. The phrase “stick it to the man” means to resist authority, to fight back.

40. Homes within nations : TEPEES
A tepee (also called a tipi and teepee) is a cone-shaped tent traditionally made from animal hides, and used by the Great Plains Native Americans. A wigwam is a completely different structure, and is often a misnomer for a tepee. A wigwam is a domed structure built by Native Americans in the West and Southwest, intended to be a more permanent structure. The wigwam can also be covered with hides, but more often was covered with grass, reeds, brush or cloth.

41. San Francisco’s Museo ___ Americano : ITALO
The Museo ItaloAmericano in San Francisco is the only museum in the world devoted to Italian- American art and culture.

42. Red giants in the night sky : S STARS
Red giants are very large stars with a relatively low mass. The atmosphere of a red giant is also very inflated, so the surface of that atmosphere that we see is relatively cool, which gives it a red color.

48. Cross character : TAU
Tau is the 19th letter of the Greek alphabet, the letter which gave rise to our Roman “T”. Both the the letters tau (T) and chi (X) were symbolically associated with the cross.

51. As : QUA
The Latin word “qua” translates into English a number of different ways, depending on the context. One translation is “as”, but it can also mean “where”, “how”, “as far as”, “by which” etc.

52. Ice legend’s family : ORRS
Bobby Orr is regarded as one of the greatest hockey players of all time. By the time he retired in 1978 he had undergone over a dozen knee surgeries. At 31 years of age, he concluded that he just couldn’t skate any more. Reportedly, he was even having trouble walking …

57. “The Humbugs of the World” author, 1865 : PT BARNUM
Phineas Taylor Barnum was one of the great American showmen, famous for founding the Barnum & Bailey Circus. By some measures, Barnum was the first ever “show business” millionaire. Beyond the world of entertainment, Barnum was also a politician for a while and served two terms in the Connecticut legislature, and was mayor of the city of Bridgeport. Barnum was a very successful author as well. One of his most famous books was “The Humbugs of the World”, an exposé of deceptions in the world of entertainment. He was believer in illusions providing they gave value for money in terms of entertainment, but he had an intense dislike of fraudulent deception and came down hard on spiritualist mediums in particular.

62. Relationship in the 2009 film “I Love You, Man” : BROMANCE
A “bromance” is the name given these days to a close relationship between two straight males.

63. 1974 hit with Spanish lyrics : ERES TU
We have a big event across Europe every year called the Eurovision Song Contest. Each nation enters one song in competition with each other, and then voters across the whole continent decide on the winner. That’s how ABBA got their big break, as the group won in 1974 with “Waterloo”. In 1972, Spain’s entry was “Eres tu” sung by the band Mocedades. “Eres tu” is the Spanish for “you are”. It is a great song, that came in second but should have won, in my humble opinion.

65. The Allman Brothers Band, e.g. : SEXTET
The Allman Brothers Band has got to be one of the most unlucky bands in the business. Soon after the group had its big break with the 1971 album “At Fillmore East”, one of the two Allman brothers, Duane, was killed in a motorcycle accident. One year later, bassist Berry Oakley was killed, also in a motorcycle accident.

1. Creator of TV’s “Alias” : JJ ABRAMS
J. J. Abrams is a director and producer of both movies and television shows. He created “Alias”, “Fringe” and co-created the highly successful show “Lost”. He also directed “Mission: Impossible III” and the 2009 movie “Star Trek”.

2. Blimp navigator : AERONAUT
There is an important difference between a “blimp” (like “The Goodyear Blimp”) and an airship (like a Zeppelin). An airship is a rigid structure with an internal framework that helps maintain the the shape of the airbag. A blimp on the other hand, uses the pressure of the helium gas inside the airbag to give it shape. Blimps are usually heavier than air, so will float naturally to the ground. They maintain their lift with forward motion, by raising the nose slightly.

3. Boxer who wrote “Reach!” : LAILA ALI
Laila Ali is the daughter of the great Muhammad Ali, and a very capable boxer in her own right. She’s not a bad dancer either, coming in third in the fourth season of “Dancing with the Stars”.

6. Folks getting into dirt : YENTAS
Yenta (Yente) is actually a female Yiddish name. In Yiddish theater it came to mean a busybody.

9. Rock’s Brian : ENO
Brian Eno started out his musical career with Roxy Music. However, his most oft played composition (by far!) is Microsoft’s “start-up jingle”, the 6-second sound you hear when the Windows operating system starts up.

10. Freaks (out) : WIGS
The idea behind the expression “wig out”, meaning “go crazy”, is that there is so much going on in your brain that it might “lift your hair/wig”.

12. Carrier of drum cases, maybe : ROADIE
A “roadie” is someone who loads, unloads, and sets up equipment for musicians on tour, on the road.

20. Like M&M’s : OBLATE
Something that is described as having an “oblate” shape is spherical, slightly depressed at top and bottom, just like the Earth for example. A more extreme example of an oblate shape is an M&M.

29. 64-Across, to a cat : I’M HIP
The word “hip” meaning “informed” is just a a variant of the word “hep”, which has the same meaning. Both terms probably originated as slang first used in the African American community.

30. Debugger? : DEET
DEET is short for N,N-Diethyl-meta-toluamide, an active ingredient in insect repellents. It is most often used to repel mosquitoes by applying it to the skin and/or clothing, but is also used to protect against tick bites.

32. Court proceedings : ACTA
Actum (plural acta) is the Latin word for “deed”. It is used in English to describe many official records, including minutes, proceedings etc.

36. Self, in a Latin phrase : IPSA
The literal translation of the legal term “res ipsa loquitur” is “the thing speaks for itself”. It refers to situations when there is an injury, and the nature of the injury is such that one can assume that negligence had to have taken place.

37. Many users follow its directions : MAPQUEST
MapQuest is a very popular Internet site, one that provides driving directions and maps. MapQuest is actually owned by AOL.

38. “Gentille” one of song : ALOUETTE
The French-Canadian children’s song starts, “Alouette, gentille alouette …” Alouette is the French word for a bird, the lark. The song is actually pretty gruesome, even though it used to teach children the names of body parts. The origin of the song lies in the French colonists penchant for eating larks, which they considered to be game birds. So in the song, the singer tells the lark he/she will pluck off the lark’s head, nose, eyes, wings and tail.

44. Some muscle cars : TURBOS
A turbocharger is a device that is designed to extract more power out of an internal combustion engine. It does so by increasing the pressure of the air entering the intake. The pressure increase comes from the use of a compressor, which is cleverly powered by the engine’s own exhaust gases.

46. ___ National Park : ARCHES
The gorgeous Arches National Park is located in eastern Utah, just outside of Moab. The main focus of the park is the preservation of over 2,000 natural sandstone arches. The arches are relatively fragile, and 43 have collapsed since 1970, mainly due to erosion caused by wind and rain.

50. It may stick to your ribs : SAUCE
Barbecue sauce sticks to the ribs on your plate …

53. Language related to Finnish : SAMI
Lapland is a geographic region in northern Scandinavia, largely found within the Arctic Circle. Parts of Lapland are in Norway, Sweden and Finland. The people who are native to the region are called the Sami people. The Sami don’t like to be referred to as Lapps, and regard the term as insulting.