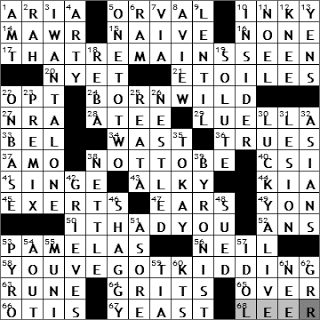 THEME: NOT TO BE … all the theme answers are well-known expressions with “TO BE” removed e.g. THAT REMAINS (to be) SEEN, BORN (to be) WILD
COMPLETION TIME: 15m 58s
ANSWERS I MISSED: 0

“Rigoletto” is one of Giuseppe Verdi’s most famous and oft-performed operas. The storyline comes from the Victor Hugo play “Le roi s’amuse” (usually translated as “The King’s Fool”). Rigoletto is the king’s fool, the jester.

5. Gov. Faubus in Arkansas history : ORVAL
Orval Faubus served as Governor of Arkansas from 1955 to 1967. In 1954, the US Supreme Court made its landmark Brown v. Board of Education decision, ruling that separate schools were unequal. In 1957, nine African American students were registered to attend an all-white school in Little Rock, a registration made possible by the Little Rock School Board who agreed to comply with the Supreme Court decision. Governor Faubus’s reaction was to deploy the National Guard in order to prevent the children (supported by a crowd) from entering the school. This move put him in direct conflict with President Eisenhower who responded by federalizing the Arkansas National Guard and sending in the 101st Airborne Division of the Army to escort the children through a hostile mob.

14. Bryn ___ : MAWR
I used to live not far from Bryn-mawr in Wales, the town with the highest elevation in the country. Appropriately enough, Bryn mawr is Welsh for “big hill”. There is also a Bryn Mawr in Pennsylvania, named after its Welsh counterpart. At the Pennsylvania location there’s a Brynn Mawr college, a private women’s school that was the first university to offer graduate degrees to women.

20. Comment put in by Putin, perhaps : NYET
Vladimir Putin became acting President of Russia at the very end of 1999 when Boris Yeltsin resigned. Putin was elected in his own right in 2000, re-elected in 2004, and then ran up against a term limit in 2008. In 2008 Putin was appointed by his successor, President Dmitry Medvedev, to the position of Prime Minister. Putin is a controversial figure, inside and outside Russia. On the one hand he led the country out of an economic crisis into a period of stability and relative prosperity. On the other hand he has been associated with government corruption and accused of allowing private concerns to have undue influence on government actions.

21. Ballet headliners : ETOILES
In the world of ballet, the étoile is the leading dancer in a company (male or female). “Étoile” is the French word for “star”.

The rock anthem “Born to be Wild” was made famous by the band Steppenwolf in 1967. The song is sometimes referred to as the first “heavy metal” song, as the words “heavy metal thunder” appears in the lyric, the first recorded use of the term in rock music.

27. Grp. at home on the range? : NRA
The NRA is the National Rifle Association, an organization that has been around since 1871. The group has had some celebrity presidents, including US President Ulysses S. Grant. It’s often said that the NRA is the most powerful lobbying group in Washington.

33. Air or ami preceder : BEL
Bel Air might refer to the district in Los Angeles, the setting for “The Fresh Prince of Bel-Air”, a sitcom starring Will Smith.

The literal translation of “bel ami” from French is “nice friend” (a male).

38. Ill-fated … or a hint for answering the six starred clues : NOT TO BE

40. Hit Jerry Bruckheimer TV drama : CSI
The TV show “CSI” gets a lot of criticism from law enforcement agencies for its unrealistic portrayal of the procedures and science of criminal investigation. I don’t care though, as I just think it’s a fun show to watch. The original CSI set in Las Vegas seems to have “gone off the boil” lately, but the addition of Sela Ward to the cast of CSI: NY has really, really raised the level of the sister show set in New York City.

43. Boozer : ALKY
Alky is a slang word for alcoholic, a sot.

44. Sportage maker : KIA
Kia Motors is the second largest manufacturer of cars in South Korea, behind Hyundai (although Hyundai is a part owner in Kia now). In recent years, Kia has focused on sales into Europe, and has been remarkably successful.

“It Had to Be You” was published in 1924, written by Isham Jones with lyrics penned by Gus Kahn. The song has been performed on screen a number of times, including a lovely version by Dooley Wilson (“Sam”) in “Casablanca”.

53. Hollywood’s Anderson and Reed : PAMELAS
Pamela Anderson is a Canadian/American actress and model, whose most famous TV roles were on the shows “Home Improvement” and “Baywatch”. Anderson is a hot topic in the gossip columns, especially after a honeymoon sex tape was stolen from her home. Beyond all the hype, she is a very committed animal rights activist, having become a vegetarian in her teens after seeing her father cleaning an animal that he had killed while hunting.

The actress Pamela Reed is best known perhaps for playing Arnold Schwarzenegger’s partner in the 1990 film “Kindergarten Cop”. She is also the voice of Ruth Powers in “The Simpsons”.

56. Diamond on a record player : NEIL
I saw Neil Diamond in concert about 15 years ago, and I must say he does put on a great show. The voice is cracking a bit though, but still, a great show. I’ve also seen him interviewed a few times on television, and I wouldn’t say he has the most scintillating personality.

63. Character in “Beowulf” : RUNE
“Beowulf” is an old epic poem from England, although the story is set in Scandinavia. Beowulf fights a battle, defending the Danish King Hrothgar from the ferocious outcast Grendel. Hrothgar had built a great hall for his people in which they could celebrate; singing, dancing and drinking lots of mead. Grendel was angered by the carousing, and attacked the hall, devouring many of the incumbent warriors as they slept. A bit of an extreme reaction to noisy neighbors I’d say …

A rune is a character in an old alphabet (say in writing an old poem like “Beowulf”), believed to have mysterious powers.

64. Alternative to hash browns : GRITS
When grain has been separated from its chaff, to prepare it for grinding, it is called “grist”. Indeed, the word “grist” is derived from the word “grind”. Grist can be ground into a relatively coarse meal, or into a fine flour. The names can be confusing though. For example, the grist from maize when ground to a coarse consistency is called “grits”, and when ground to a fine consistency is called “corn meal”.

66. People mover since 1853 : OTIS
Elevators (simple hoists) had been around for a long time. What Elisha Otis did was come up with the “safety elevator”, a design that he showcased at the 1853 World’s Fair in New York. He would stand on an elevated platform in front of onlookers and order his assistant to cut the single rope holding up the platform. His safety system kicked in when the platform had only fallen a few inches, amazing the crowd. After this demonstration at the fair, the orders came rolling in.

68. What a rake may do : LEER
A “rake” is defined as a man who is habituated to immoral conduct (isn’t it always the man??!!). The rake is a character who turns up frequently in novels and films, only interested in wine, women and song, and not accepting the responsibilities of life. Wickham in Jane Austen’s “Pride and Prejudice” and Daniel Cleaver (the Hugh Grant part) in the movie “Bridget Jones’s Diary” would be good examples. “Rake” comes from the Old Norse “reikall”, meaning “a vagrant or a wanderer”.

Famously, Greta Garbo lived a life of seclusion in New York City after she retired from the entertainment business. Commentators often associated her need for privacy with a line she uttered in the great 1932 movie “Grand Hotel”. Her character, Grusinskaya the Russian ballerina, said, “I want to be alone (…) I just want to be alone”.

6. Head of the Egyptian god Amun : RAM
Amun was also known as “Amun-Ra”, a god in Egyptian mythology. As Amun was associated with virility, he was often represented with the head of a ram.

8. Arthur Miller play “___ From the Bridge” : A VIEW
“A View From the Bridge” is a play by Arthur Miller. It has an unusual structure for a play first performed in 1955 in that it is a verse-drama, meaning that all of the dialog is spoken in the form of verse, somewhat like the works of Shakespeare.

11. Good name for someone born on Dec. 25 : NOEL
Noel is the French word for the Christmas season, ultimately coming from the Latin word for “birth”, “natalis”.

12. What might give a physical reaction? : KNEE
The foot is supposed to kick forwards when the tendon/muscle at the front of the leg is tapped just below the knee. The kick takes place due to a reflex reaction, an impulse sent along nerves from the site of the tap to the spine and back to the leg muscle, without direct involvement of the brain.

18. Old WB sitcom : REBA
Reba McEntire is country music singer, and television actress. She starred in her own sitcom called “Reba” that aired on the WB and the CW cable channels from 2001 to 2007.

19. Substance in a chemistry experiment : SOLUTE
A solute is a substance dissolved in a fluid, creating a solution.

30. *Like someone who’s had a narrow escape : LUCKY ALIVE
From “lucky to be alive”.

31. Wound : LESION
A lesion is a a wound or any abnormal tissue found in an organism. The word “lesion” comes from the Latin word “laesio” meaning “injury”.

35. Sweet wine of Hungary : TOKAY
“Tokay” is the English version of what are more correctly called Tokaji wines; wines from the Tokaj-Hegyakja region of Hungary. Most Tokaji wines are relatively sweet.

39. Certain English poetry scholar : BYRONIST
George Gordon Byron, known simply as “Lord Byron”, was an English poet active in the early 1800s. He was as famous for the wild excesses in his personal life as he was for his poetry. He lived much of his life outside of England, and fought for revolutionaries in both Italy and Greece, eventually dying from a fever contracted while fighting against the Ottomans in Greece.

48. Took to court : SUED
Our word “sue” comes from the Anglo-French word “suer” meaning “to follow after”. “Suer” is also the root of our words “pursue” and “ensue”.

53. Fire starter? : PYRO
Pyro is the combining form of the Greek word for “fire”. A pyromaniac (a pyro) is someone with an abnormal desire to start fires, or with a general obsession with fire.

54. Follower of juillet : AOUT
Août is the French for August, and juillet is French for July (note that the name of months aren’t capitalized in French).

55. San Francisco’s public transit system, with “the” : MUNI
SF Muni is the San Francisco Municipal Railway, the name of the public transportation system in the city and surrounding area. SF Muni includes buses, light rail, and most famously, the city’s cable cars.

60. Pawn jumpers: Abbr. : KTS
It is believed that the game of chess originated in northwest India, evolving from a 6th-century game called “caturanga”, a Sanskrit word meaning “four divisions”. These four (military) divisions were represented in the game:

61. Formerly : NEE
“Née” is the French word for “born”, when referring to a female. The male equivalent is “né”