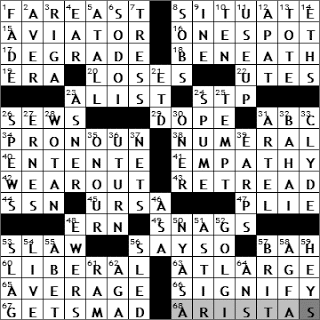 15. Ace : AVIATOR
A flying ace is an aviator who has shot down a number of enemy planes during combat. The qualifying number of kills seems to vary, but five is common. The first use of “ace” was during WWI when the French newspapers dubbed pilot Adolphe Pegoud “l’as” (French for “the ace”) when he shot down his fifth German plane.

16. Ace : ONE-SPOT
An ace or a one-spot is a domino or die with only one spot showing.

20. Shakes : LOSES
If one loses a tail, someone that is following one, it can be said that one has shaken the tail.

22. Runnin’ ___, 1944 N.C.A.A. basketball champs : UTES
The Runnin’ Utes are the basketball team of the University of Utah. The team was given the nickname the Runnin’ Redskins back when Jack Gardner was the head coach, from 1953 to 1971. The “Runnin'” part of the name was chosen because Gardner was famous for playing quick offenses. The “Redskins” name was dropped in favor of the less offensive “Utes”.

Richard Petty earned the nickname “The King” on the NASCAR circuit. He is retired now and won the NASCAR Championship seven times, a record that has only been equaled by Dale Earnhardt. Richard Petty is part of a famous family of racers. Richard’s father was Lee Petty, winner of the first Daytona 500 in 1959. Richard’s son is Kyle Petty, a well-known driver, and Richard’s grandson was Adam Petty, a driver killed racing in 2000.

Mario Andretti is a retired Italian American racing driver, named US Driver of the Year in 1967, 1978 and 1984. Both of Mario’s sons, Michael and Jeff are successful auto racers, as well as Mario’s nephew, John Andretti.

42. Tire : WEAR OUT
43. Tire : RETREAD
A retread tire is one that has been recycled, possibly more than once. The tread of the old tire is buffed away, and and new rubber tread is applied to the “bare” tire using some special process that seems to work really well. Retreads are a lot cheaper, and obviously are relatively friendly to the environment.

44. Tax form datum: Abbr. : SSN
The main purpose of a Social Security Number is to track individuals for the purposes of taxation, although to me it is looking more and more like an “identity number” these days. The system was introduced in 1936. Before 1986, a SSN was required only for persons with substantial income, so many children under 14 had no number assigned. There was concern that a lot of people were claiming children who didn’t exist as dependents on their tax forms, so from 1986 onwards it was a requirement to get a SSN for any dependents over the age of 5. Sure enough, in the following year’s tax returns, seven million dependents “disappeared”.

45. Major sight in the sky? : URSA
The constellation called Ursa Major (Latin for “Larger Bear”) is often just called the Big Dipper because of its resemblance to a ladle, or dipper. It also resembles a plow, and that’s what we usually call it back in Ireland, the “plough”.

49. Sweater woes : SNAGS
Back in the early 1800s “sweater” was a name introduced to describe a garment that was worn in order to cause one to sweat and lose weight. By the late 1800s, sweater was being used to describe a woolen vest, originally worn when rowing.

53. Raw side? : SLAW
The term “coleslaw” is an Anglicized version of the Dutch name “koolsla”, which in itself is a shortened form of “Koolsalade” meaning “cabbage salad”.

56. Sway : SAY-SO
To have the say-so is to have the authority to decide something, to hold sway.

67. Bristles : GETS MAD
68. Bristles : ARISTAS
An arista is bristle-like structure found at the tip of the antenna of some flies. An arista looks like a bristle on an ear of corn, hence the name. “Arista” is the Latin for “ear of grain”.

3. Latvian capital : RIGA
Riga is the capital city of Latvia. The historical center of Riga is a UNESCO World Heritage Site, declared so because of the magnificent examples of Art Nouveau architecture.

4. Elephant’s-___ (plant) : EAR
Elephant’s-ear is a plant with leaves shaped like the ear of an elephant, found in the rainforest. Some can be used a houseplants.

10. Good companion for an ace in Vegas : TEN
The game of “twenty-one” was first referred to in a book by Cervantes, the author famous for writing “Don Quixote”. He called the game “ventiuna” (Spanish for “twenty-one”). The story was written just after 1600, so the game has been around at least since then. Twenty-one came to the US but wasn’t all that popular so bonus payouts were introduced to create more interest. One of more noted bonuses was a ten-to-one payout to a player dealt an ace of spades and a black jack. This bonus led to the game adopting the moniker “Blackjack”.

21. J.F.K. posting : ETD
The Idlewild Golf Course was taken over by the city of New York in 1943, and construction started on a new airport to serve the city to relieve the congestion at La Guardia. The Idlewild name has stuck with the airport to this day, even though the airport was named after Major General Alexander E. Anderson from the first days of the project. When the facility started operating in 1948 it was known as New York International Airport, Anderson Field. It was renamed in 1963 to John F. Kennedy International Airport, one month after the President was assassinated.

23. Ed of Hollywood : ASNER
Ed Asner is most famous for playing the irascible but lovable Lou Grant on “The Mary Tyler Moore Show” and the spin-off drama “Lou Grant”. Off-screen Asner is noted for his political activism. He served two terms as president of the Screen Actors Guild, and was very involved in the 1980 SAG strike. When “Lou Grant” was cancelled in in 1982, despite decent ratings, there was a lot of talk that the cancellation was a move by the network against Asner personally. In fact, one of Anser’s activist colleagues, Howard Hesseman (who played Johnny Fever) found that his show, “WKRP in Cincinnati” was also cancelled, on the very same day.

27. Coastal fliers : ERNES
An ern (also erne) is also called the while-tailed eagle, and the sea-eagle.

28. Odin, to the Germans : WOTAN
Wotan is an alternative, High German, spelling of Woden, the Anglo-Saxon version of the Norse god Odin. Wotan is the head god in the pagan tradition, but as paganism was gradually replaced by Christianity in the 7th and 8th centuries, Wotan moved from his place in religion and into the realm of folklore. Indeed, he is a precursor of our modern day Father Christmas. Wotan (Woden) also gave his name to Wednesday, Woden’s Day …

30. Lulu : ONER
A “lulu” or a “oner” is a remarkable person or object. The word “lulu” first appeared in an article about baseball in New Orleans back in 1886.

31. Old Russian co-op : ARTEL
The cooperative associations known as artels were often pretty informal affairs. Basically any group could get together and form an artel for any specific commercial purpose … anything from gold-mining and fishing, to stealing and begging.

32. Religion with an apostrophe in its name : BAHA’I
The Baha’i Faith is relatively new in the scheme of things, founded in Persia in the 1800s. One of the tenets of the religion is that messengers have come from God over time, including Abraham, the Buddha, Jesus, Muhammad and most recently Bahá’u’lláh, who founded the Baha’i Faith.

33. River through Glasgow : CLYDE
Glasgow is the largest city in Scotland, and sits on the River Clyde. Back in the Victorian Era Glasgow earned a reputation for excellence in shipbuilding and was known as “Second City of the British Empire”. Glasgow shipyard’s were the first homes of such famous vessels as the Lusitania, the Queen Mary and the Queen Elizabeth.

39. Brothers of the Wild West : EARPS
The famous Earp brothers of the Wild West were Wyatt, Virgil and Morgan. All three brothers participated in what has to be the most famous gunfight in the history of the Old West, the Gunfight at the O.K. Corral, in Tombstone, Arizona. Strangely enough, the fight didn’t happen at the O.K. Corral, but took place six doors down the street in a vacant lot next to a photography studio.

52. ___ body (cell part) : GOLGI
We all remember learning about the Golgi apparatus (also Golgi body) when studying cell structure in biology class, right? The cell component was discovered in 1897 by Camillo Golgi who gave it his name. The Golgi apparatus plays an essential role in processing the larger molecules used in metabolism i.e. lipids and proteins.

53. Denigrate, in English slang, with “off” : SLAG
To “slag off” is a pretty rude slang term meaning to verbally attack someone. In Ireland we use the term “slagging” in a much more friendly and jocular way, where it’s more like teasing. The kind of things that brothers do to each other when they get together, and don’t I know it …

55. Aid’s partner : ABET
The word “abet” comes into English from the Old French “abeter” meaning “to bait” or “to harass with dogs” (it literally means “to make bite”). This sense of encouraging something bad to happen morphed into our modern usage of “abet” to mean aid or encourage someone in a crime.

56. Something that’s fun on the coast? : SLED
Being on a sled as it “coasts” down the hill is fun, but dragging it back up the hill again, not so much …

57. Person under the Union Jack : BRIT
The Union Jack is a “jack” (a flag) representing the “Union” (the United Kingdom of Great Britain and Northern Ireland). The flag is made up of three crosses:

58. Fuji rival : AGFA
Agfa was founded in Germany in 1867, a company focused on the manufacture of dyes. The full name of the enterprise was Aktiengesellschaft für Anilinfabrikation, shortened to Agfa, and translating as “Corporation for Aniline (a dye) Production”. Agfa merged with a Belgian company in 1894, getting them into the photographic business. Agfa 35mm film hasn’t been produced for a few years now, but there is still inventory out there and purists are buying it when they can.

62. Turkish title : AGA
An aga, or agha, is a title that was used by both civil and military officials in the Ottoman Empire.