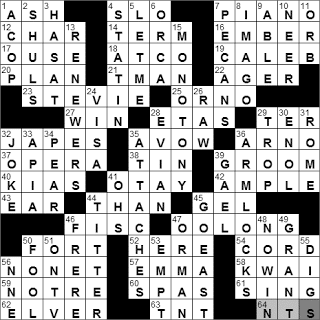 The electronic version of today’s grid (below) is incorrectly numbered, so I’ve included a handwritten solution as well. Please excuse the poor quality, but that’s the best I could do!

Across
7. Place for a hammer : PIANO
In that most incredible of all instruments, the piano, sound is made by pressing keys on a keyboard. Each time a key is pressed a small hammer (covered in felt) strikes a steel string. The hammer rebounds off the string, and the string vibrates at its resonant frequency, making the sound we all know so well.

12. One in on the founding of a company : CHARTER MEMBER
CHAR – TERM – EMBER

15/17. River of York : OUSE
York is the biggest city on the River Ouse in Yorkshire. The name “Ouse” comes from the Celtic word “usa” meaning water.

16/18. Record label of the Beatles’ “Ain’t She Sweet” : ATCO
Atco Records is an American record label founded in 1955, taking its name from its parent, Atlantic Corporation.

17/19. Spy sent by Moses into Canaan : CALEB
According to the Bible, after fleeing Egypt the Hebrews were led by Moses to the promised land of Canaan. Outside Canaan, Moses sent twelve spies into Canaan (one from each of the Twelve Tribes) to report on what awaited them. Ten spies returned with exaggerated stories of giants who would kill the Hebrew army if it entered Canaan. Two spies, Caleb and Joshuah, came back with valid reports, that the Hebrews could inhabit Canaan. As a result of the false reports from the ten spies, the Hebrews did not enter Canaan but instead wandered the desert for another forty years, before they finally took up residence in the promised land. At the end of the forty years, Caleb and Joshua were the only adults that survived the forty-year journey, a reward from God for their obedience.

A T-man is a law-enforcement agent of the US Treasury.

19/23. Wonder of note : STEVIE
The great musician Stevie Wonder signed up with Motown Records when he was just 11-years-old. He has been remarkably loyal to the label and is still recording with Motown some 50 years later. The level of Stevie Wonder’s success is illustrated by his 22 Grammy Awards, the most Grammys awarded to a male solo artist. Wonder was born 6 weeks prematurely, and incomplete development of blood vessels in his eyes caused the retinas to detach leaving him blind soon after birth.

Eta is the seventh letter of the Greek (Hellenic) alphabet, and is a forerunner of our Latin character “H”.

“Ter” is the Latin word for “three”, commonly used in the medical world on prescriptions as part of the expression “ter in die”. “Ter in die” is Latin for “three times a day”, abbreviated to “TID”. “Bis in die” (BID) would be twice a day, and “quater in die” (QID) would be four times a day.

32/36. It flows near the Piazzale Michelangelo : ARNO
The Arno is the principal river in the Tuscany region of Italy, and passes through the cities of Florence and Pisa. Famously, the Arno flooded in 1966, the worst flood in the region for centuries. There were numerous deaths and extensive destruction of priceless art treasures particularly in Florence.

The Piazzale Michelangelo is a famous square in Florence that sits at quite a height in the city and from which one has magnificent panoramic views of the skyline. If you’ve seen photos of the skyline of Florence say on a postcard, chances are they were taken from the Piazzale Michelangelo. The square is named of course for the city’s most famous sculptor, and you can see bronze replicas of Michelangelo’s most celebrated works on display in the piazza.

33/37. Workplace where there are many openings : OPERATING ROOM
OPERA – TIN – GROOM

35/40. Sorento and Sedona : KIAS
Kia Motors is the second largest manufacturer of cars in South Korea, behind Hyundai (and Hyundai is a part owner in Kia now). In recent years, Kia has focused on sales into Europe, and has been remarkably successful.

36/41. “Our Gang” approval : OTAY
Hal Roach made a whole series of comedy shorts with “The Little Rascals”, also known as “Our Gang”. This very likable bunch of kids included Spanky, and his kid brother, Porky. Porky had a speech impediment, so he couldn’t pronounce “Okay, Spanky” very clearly and it came out as “Otay, Panky”.

“Earth Angel (Will You Be Mine)” was originally recorded by the Penguins in 1954, and then was a big hit for the Crew-Cuts the following year, in 1955. Famously, it was played at the high school dance scene in the very entertaining movie “Back to the Future”, from 1985 starring Michael J. Fox. In the film, the song was performed by the fictional group, Marvin Berry and the Starlighters.

41/46. Kind of year: Abbr. : FISC
In business, it is required that a public company issue an annual set of financial statements summarizing the company’s performance for the year. This period of reporting, the fiscal year, need not coincide with a calendar year, so the books don’t need to close on December 31st. A fiscal year might close on the last Friday every June for example.

Franz Schubert (1797-1828) was an Austrian composer, particularly noted for his large portfolio of lieder (songs). Schubert is also famous for his “Unfinished Symphony”. Schubert’s Symphony No. 7 was was left as a draft after he passed away, and as such was “unfinished”. However, it was more complete than his Symphony No. 8 which is the one we know as, “The Unfinished”.

50/57. 1996 Gwyneth Paltrow title role : EMMA
One of the more famous screen adaptations of Jane Austen’s “Emma” is an excellent 1996 Miramax production starring the wonderful Gwyneth Paltrow in the title role. Also worth mentioning is the outstanding performance by Toni Collette as Emma’s protégé, Harriet Smith.

51/58. River in a 1957 hit film : KWAI
The river referred to in the movie (and novel) “The Bridge on the River Kwai” is actually called the Khwae Yai River, and is in western Thailand. The original novel by Pierre Boulle was published in French in 1952, and the brilliant movie released in 1957. Both tell the story of construction of part of the Burma Railway, and a bridge over the river, using prisoners of war as laborers. The film stars William Holden, Alec Guinness and Jack Hawkins.

53/62. Young fish that has migrated from the Sargasso Sea : ELVER
The Sargasso Sea, an area within the Atlantic Ocean, is famous for being home to many species of Sargassum, the algae floating on the surface that gives the area its name. The Sargasso Sea is also where both the European and American eels lay their eggs and hatch their young. The young eels (or “elvers”) then head east or west, depending on the species.

54/63. Rubble maker, for short : TNT
TNT is an abbreviation for trinitrotoluene. The explosive chemical was first produced by the German chemist Joseph Wilbrand in 1863, who developed it for use as a yellow dye. TNT is relatively difficult to detonate, so it was on the market as a dye for some years before its more explosive properties were discovered.

55/64. Some Windows systems : NTS
Windows XP, Windows Vista and now Windows 7; they’re all based on the Windows NT operating system. The NT originally stood for N-Ten, but Microsoft preferred to market it as “New Technology”. I should note that the information about the “N-Ten” derivation comes courtesy of Bill Gates in a 1998 interview. There is a common perception that Windows NT (WNT) takes its name from VMS, an earlier operating system developed by Digital Equipment Corporation. “WNT” is what’s called a “Caesar cypher” of “VMS”, as you just augment the the letters of VMS alphabetically by one to arrive at WNT. Bill Gates disputes this derivation of the name, and he wouldn’t lie …

2. Synagogues : SHULS
Shul is an another word for a synagogue. Apparently “shul” is the term mostly used in Orthodox Judaism, “synagogue” in Conservative Judaism, and “temple” in Reform Judaism.

4. Cholesterol medication : STATIN
We produce all the cholesterol we need in our own bodies, in the liver, so don’t actually need additional amounts in our diet. Elevated levels of cholesterol, often associated with diet (from eating animal fats) have been closely linked with higher risk of cardiovascular disease. A change in the diet is the usual recommendation to lower cholesterol levels in the blood, but drugs such as statins can be administered as well, which inhibit the body’s own production of cholesterol.

6. Sea menace : ORCA
The taxonomic name for the killer whale is Orcinus orca. The use of the name “orca”, rather than “killer whale”, is becoming more and more common. The Latin word “Orcinus” means “belonging to Orcus”, with Orcus being the name for the Kingdom of the Dead.

8. Big bug : IMAGO
The imago is the last stage of development of an insect. All four stages are embryo, larva, pupa and imago. “Imago” is simply the Latin word for “image”.

“Ne’er ask the hour — what is it to us
How Time deals out his treasures?”

20/24. Something that’s stamped : VISA
A visa is a usually a stamp in one’s passport, an indication that one is authorized to enter a particular country. The word “visa” comes into English via French, from the Latin expression “charta visa” meaning “paper that has been seen”, or “verified paper”.

26/30. Hydroxyl compound : ENOL
An enol is an alkene with a hydroxyl group, sort of part alkene, part alcohol. The term “enol” therefore, is a portmanteau of “alkene” and “alcohol”.

27/31. Setting for “Coriolanus” : ROME
“Coriolanus” is one of William Shakespeare’s tragedies. The play tells the story of the real-life Roman general Gaius Marcius Coriolanus, who lived in the 5th century BC.

28/32. One may be running over time : JOKE
One can have a “running joke” with someone, for example.

Apia is the capital city, indeed the only “city”, in the Pacific island nation of Samoa. The harbor of Apia is famous for a very foolish incident in 1889 involving seven ships from Germany, the US and Britain. A typhoon was approaching, so the safest thing to do was head for open water away from land, but no one would move for fear of losing face in front of the other nations. Six of the vessels were lost in the typhoon as a result, and 200 American and German sailors perished. The British cruiser HMS Calliope barely managed to escape from the harbor and rode out the storm safely.

30/34. Schnapps flavor : PEAR
“Schnapps” isn’t actually a German word, but is our English spelling of the German “Schnaps” (note the “pp” versus “p”). Germans use the word Schnaps to describe any strong, alcoholic drink. We tend to use Schnapps to mean a liqueur, usually a sweet beverage flavored with fruit. “Schnaps” is a Low German noun meaning “swallow”.

34/39. Highlander : GAEL
A highlander would be someone from the highlands of Scotland, and would qualify as a Gael. To me a Gael is anyone who speaks one of the Erse tongues.

36/41. Song words accompanying “Sherrie” and “Susanna” : OHS
“Oh Sherrie” was released in 1984 by Steve Perry, once a member of the group, Journey.

“Oh! Susanna” is a song that was published in 1848, written by Stephen Foster. The song is often called “Banjo on My Knee”, an understandable slip given the words of the chorus.

40/45. Enter an Ivy League school, maybe : GO EAST
The term Ivy League originally defined an athletic conference, but now is used to describe a group of schools of higher education that are associated with both a long tradition and academic excellence. The eight Ivy League Schools are: Brown, Columbia, Cornell, Dartmouth, Harvard, Princeton, the University of Pennsylvania, and Yale.

42/47. “The Suze ___ Show” : ORMAN
Suze Orman is a financial advisor who has gotten her message out on television, in books and on the speaking circuit. She often appears on PBS, and indeed is the most successful fundraiser public television has ever had.

“Digs” is short for “diggings” meaning “lodgings”, but how that meaning came about, no one seems to know for sure.