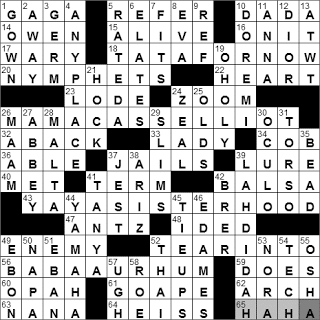 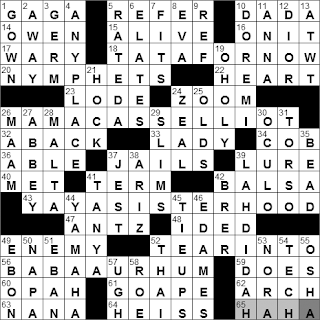 CROSSWORD SETTER: Mike Buckley
THEME: Going GAGA with DADA and NANA … HA-HA! All the theme answers begin with words rhyming with GAGA, DADA, NANA and HA-HA, the across answers in the corners of the grid:

Today’s Wiki-est, Amazonian Googlies
Across
1. Out of one’s gourd : GAGA
“Gourd” is a slang term for head.

14. Wilson of “Starsky & Hutch,” 2004 : OWEN
The 2004 film “Starsky & Hutch” is of course an adaptation of the seventies TV cop show of the same name. Ben Stiller and Owen Wilson play the leads in the movie, and as you may recall the TV show starred Paul Michael Glaser and David Soul.

20. Nubile maidens : NYMPHETS
The word “nubile” can mean of a marrying age, and also sexually attractive. The word generally applies to young women, and comes from the Latin “nubere” meaning “to take a husband”.

23. Rich supply of ore : LODE
A lode is metal ore deposit that’s found between two layers of rock or in a fissure.

24. When doubled, a Mazda catchphrase : ZOOM
Mazda is a Japanese car manufacturer based in the Hiroshima Prefecture in Japan. The ballpark where the Hiroshima baseball team play was for many years known as the MAZDA Zoom-Zoom Stadium.

26. “Heavyweight” of 1960s folk/pop : MAMA CASS ELLIOT
Cass Elliot was one of the four singers in the Mamas and the Papas, the sensational group from the sixties. She was performing sold-out concerts in London in 1974 when she was found dead one morning, after having a heart attack. She was only 32 years old. Eerily, she died in the same flat (on loan from Harry Nilsson) in which the Who’s drummer, Keith Moon, would die just four years later.

39. What catnip is to a cat : LURE
About 50% of all cats are affected in some way by the plant catnip. There is a terpenoid in the oil of the plant called nepetalactone that the cat inhales that can cause anything from drowsiness to anxiety.

40. Citi Field player : MET
Citi Field is the new baseball stadium used by the New York Mets. It sits right next door to Shea stadium, where the Mets had played for decades. And the name of course comes from sponsor Citigroup.

41. Four years, for a president : TERM
A candidate can only be elected into the office of US President twice. Indeed, if someone succeeds into office (as did Gerald Ford when President Nixon resigned), then one can only stand for election for one more term. However, in theory one can succeed to the office of President an unlimited number of times.

42. Buoyant wood sometimes used in rafts : BALSA
Balsa is a very fast growing tree that is native to parts of South America. Even though balsa wood is very soft, it is actually classified as a hardwood, the softest of all the hardwoods (go figure!). Balsa is light and strong, so is commonly used in making model airplanes, and rafts. Amazingly, in WWII a full-size British plane, the de Havilland Mosquito, was built largely from balsa and plywood. No wonder they called it “The Wooden Wonder” and “The Timber Terror”.

43. Group in a hit 2002 film with “divine secrets” : YA-YA SISTERHOOD
The 2002 film “Divine Secrets of the Ya-Ya Sisterhood” was a screen adaptation of the successful novel of the same name by Rebecca Wells. The Ya-Ya Sisterhood is a secret order created by four little girls from Louisiana, all of whom get together in later life to reassure a potential bride of the wonders of marriage and love.

47. Animated 1998 film set in Central Park : ANTZ
“Antz” was the first feature movie released by Dreamworks SKG, the studio founded by Steven Spielberg and two partners in 1994. “Antz” came out in 1998, and has a stellar cast that includes Woody Allen, Sharon Stone, Sylvester Stallone, Gene Hackman and many, many other big names. The cartoon is quite unique in that the facial features of the voice actors are reflected in the animated characters.

49. Lex Luthor, to Superman : ENEMY
Lex Luthor is the arch-nemesis of Superman in comics. Luthor has been portrayed in a number of guises in the comic world as well in movies and on the small screen. For example, he appeared as Atom Man in the 1950 film series “Atom Man vs. Superman”, and was played by actor Lyle Talbot, opposite Kirk Alyn’s Superman.

Rum baba is a small yeast cake saturated in rum, and sometimes filled with whipped cream. The rum baba recipe is derived from the recipe for the tall “babka” yeast cake that was introduced to the world by the Polish communities. The word “baba”, and “babka”, mean “old woman” or “grandmother” in English. I guess someone must have thought that all grandmothers were saturated in rum!

60. Sashimi fish : OPAH
Opah is the more correct name for the fish also known as the sunfish, moonfish or Jerusalem haddock. I’ve seen one in the Monterrey Aquarium. It was huge …

Down
7. Conniptions : FITS
A conniption, or more commonly a conniption fit, is a bout of violent anger or panic.

8. Actress Longoria : EVA
Eva Longoria is a fashion model and an actress with a regular role on “Desperate Housewives”, playing Gabrielle Solis.

10. Start of the musical scale : DO RE MI
The solfa syllables are: do, re, mi, fa, sol, la & ti. The solfa scale was developed from a six-note ascending scale created by Guido of Arezzo in the 11th century. He used the first verse of a Latin hymn to name the syllables of the scale:

11. Fashion style-setter Wintour : ANNA
Anna Wintour is fashion editor in Britain, and is also the editor-in-chief of American “Vogue”. Lauren Weisberger wrote the book “The Devil Wears Prada”, with the tyrannical main character apparently based on Wintour.

12. Fashion designer Christian : DIOR
Christian Dior was a French fashion designer. As WWII approached, Dior was called up by the French military, drawing a temporary halt to his career in fashion. He left the army in 1942, and for the duration of the war designed clothes for the wives of Nazi officers and French collaborators. After the war his designs became so popular that he helped reestablish Paris as the fashion center of the world.

13. No. on a periodic table : AT WT
The Atomic Weight of an element is the mass of one atom of the element, relative to the mass of an atom of carbon (which is assumed to have an atomic weight of 12).

19. “___ Night” (Christmas carol) : O HOLY
“O Holy Night” was the second piece of music ever to be broadcast on radio. The Canadian-American inventor Reginald Feesenden made what is thought to be the first AM radio broadcast on Christmas Eve 1906. He included some music, starting with a piece by Handel, followed by “O Holy Night” played on the violin.

21. Take to a pawnshop : HOCK
The term “in hock” is an American invention. Back in the mid-19th century it meant both “in debt” and “in prison”. The work “hock” came from the Dutch “hok” meaning “jail”.

25. Automaker Ransom Eli : OLDS
The REO Motor Company was founded by Ransom E. Olds (hence the name REO). The company made cars, trucks and buses, and was in business from 1905 to 1975 in Lansing, Michigan.

27. Westminster ___ : ABBEY
The correct name for the Gothic church we know as Westminster Abbey is the Collegiate Church of St. Peter at Westminster. The Abbey is a favored location for coronations and royal weddings and burials. The last royal wedding in the Abbey was the marriage of Prince Andrew to Sarah Ferguson in 1986, and the next planned wedding is between Prince William and Kate Middleton in April 2011.

28. Its coat of arms has a cross, but no falcon : MALTA
The “falcon” reference in this clue is the Dashiell Hammett novel “The Maltese Falcon”.

The island of Malta is relatively small, but with a large population, making it one of the most densely populated countries in Europe. Malta’s strategic location has made it a prized possession for the conquering empires of the world. Most recently it was part of the British Empire, and was an important fleet headquarters for Britain. Malta played a crucial role for the Allies during WWII as it was located very close to the Axis shipping lanes in the Mediterranean. The Siege of Malta lasted from 1940 to 1942, a prolonged attack by the Italians and Germans on the RAF and Royal Navy, and the people of Malta. When the siege was lifted, King George VI awarded the George Cross to the people of Malta collectively in recognition of their heroism and devotion to the Allied cause. The George Cross can still be seen on the Maltese flag, even though Britain granted Malta its independence in 1964.

31. Neck-to-waist area : TORSO
“Torso” is an Italian word meaning the “trunk of a statue”, that we imported into English.

35. Bit of wampum : BEAD
Wampum are sacred shell beads of North American tribes in the Eastern United States. The early European colonists often used wampum as a trading device with the native peoples.

39. Highfalutin : LAH-DI-DAH
The expression “high falutin'” dates back to the mid-1800s. some suggest that it may be a mutation from “high flying”, as high falutin’ of course means “haughty” or “pretentious”.

42. ___ Rabbit : BR’ER
Br’er Rabbit and Br’er Fox are characters in the Uncle Remus stories, written by Joel Chandler Harris. His stories are adaptations of African American folk tales that he collected across the American South. The “Br’er” of course stands for “brother”.

44. Kawasaki competitor : YAMAHA
The Japanese company Yamaha, started out way back in 1888 as a manufacturer of piano and reed organs. Even though the company has diversified since then, Yamaha’s logo still reflects it musical roots. Even on Yamaha motorcycles you can see a logo made up of three intersecting tuning forks.

46. One of four singing brothers of the 1950s : ED AMES
Mingo was a Native American character in the TV show “Daniel Boone”, played by Ed Ames (opposite Fess Parker). Ames was also a popular singer in the fifties, one of “The Ames Brothers”.

51. Nonmusical Abba : EBAN
Abba Eban was an Israeli diplomat and politician, born Aubrey Solomon Meir Eban in Cape Town. While working at the United Nations after WWII he changed his name to “Abba”, the Hebrew word for “father”, reportedly as he could see himself as the father of the nation of Israel.

53. Nick’s partner in “The Thin Man” : NORA
High on the list of my favorite movies of all time is “The Thin Man” series starring William Powell and the incredibly attractive Myrna Loy. Powell and Loy played the characters Nick and Nora.

55. Job conditions agcy. : OSHA
The Occupational Safety and Health Administration was created in 1970 during the Nixon administration. OSHA regulates workplaces in the private sector. OSHA regulates just one government agency, the US Postal Service.

58. ___ v. Wade : ROE
Roe v. Wade was decided in a US District Court in Texas in 1970, and reached the Supreme Court on appeal. The basic decision by the Supreme Court was that a woman’s constitutional right to privacy applied to an abortion, but that this right had to be balanced with a state’s interest in protecting an unborn child, and a mother’s health. The Court further defined that the state’s interest became stronger with each trimester of a pregnancy. So, in the first trimester, the woman’s right to privacy outweighed any state interest. In the second trimester, the state’s interest in maternal health was deemed to be strong enough to allow state regulation of abortion for the sake of the mother. In the third trimester, the viability of the fetus dictated that the state’s interest in the unborn child came into play, so states could regulate or prohibit abortions, except in cases where the mother’s life was in danger. I’m no lawyer, but that’s my understanding of the initial Supreme Court decision …