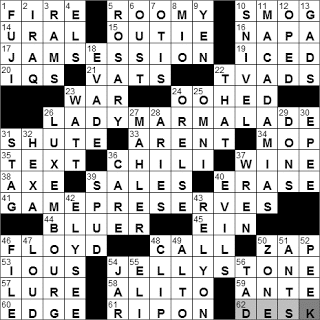 Today’s Wiki-est, Amazonian Googlies
Across
10. Urban pollution : SMOG
“Smog” is of course a portmanteau word, formed by melding “smoke” and “fog”. The word was first used to describe the air around London in the early 1900s.

14. Russia’s ___ Mountains : URAL
The eastern side of the Ural Mountains in Russia are generally regarded as the natural divide between the continents of Europe and Asia.

17. Informal gathering of musicians : JAM SESSION
The use of “jam”, to mean an improvised passage performed by a whole jazz band, dates back to the late twenties. This gave rise to “jam session”, a term used a few years later. The use of “jam” in this context probably stems from the meaning of “jam” as something sweet, something excellent.

20. Mensa members’ stats : IQS
If you ever learned Latin, “mensa” was probably taught to you in lesson one as it’s the word commonly used as an example of a first declension noun. Mensa means “table”. The Mensa organization, for folks with high IQs, was set up in Oxford in England back in 1946. To become a member, you have to be in the top 2% of the population’s IQ. The IQ score needed depends on the test you use. For the Stanford-Binet test, that’s an IQ of 132 or better; for the Cattell test it is 148 or better.

23. One of the W’s in W.W. I : WAR
As with WWII, in the run up to the First World War tension was building as the European powers jockeyed for position on the world stage. The event that triggered the open warfare was the June 1914 assassination of Archduke Franz Ferdinand of Austria by a Yugoslav nationalist. There followed an ultimatum by the Austro-Hungarian Empire against the Kingdom of Serbia. This in turn triggered what were basically automatic threats invoked by age old alliances, and within weeks the major powers were at war. As these were colonial powers, the conflict spread around the world. By the time an armistice was signed in November 1918, the Austro-Hungarian Empire and the Ottoman Empire had ceased to exist, and the German and Russian Empires had been defeated.

26. 1975 #1 hit for LaBelle : LADY MARMALADE
“Voulez-vous coucher avec moi ce soir?” was a lyric from the song “Lady Marmalade” released in 1975 by the girl group Labelle.

I’ve always thought that the phrase “Voulez-vous coucher avec moi ce soir?” was grammatically “odd”. The expression is sexually suggestive, meaning “Would you like to sleep with me tonight?” The problem is that the use of the formal (or plural!) “vous” instead of the familiar “tu” indicates a lack of intimacy that should be present in such a forward invitation. But, I just read that the term would perhaps be correct if the speaker was a high-class prostitute using formal grammar with a client. Great disco melody, surprising lyrics …

31. “On the Beach” author Nevil : SHUTE
“On the Beach” is a wonderful novel by Nevil Shute, first published in 1957. The famous story is about the ending of the human race as nuclear fallout spreads south from the northern hemisphere after WWIII. The novel was adapted into a great 1959 movie starring Gregory Peck, Ava Gardner and even Fred Astaire.

36. Dish rated in alarms : CHILI
The full name for the dish that is often called simply “chili” is chili con carne, Spanish for “peppers with meat”. The dish was invented by immigrants from the Spanish Canary Islands in the city of San Antonio, Texas (a city which the islanders founded). The San Antonio Chili Stand was a popular attraction at the 1893 Chicago World’s Fair, which introduced the dish to the rest of America and to the world.

38. Lumberjack’s tool : AXE
As one might imagine, “lumberjack” was originally a Canadian term.

46. “Pretty Boy” of crime : FLOYD
Charles Arthur Floyd was a bank robber who got a lot of press coverage for his crimes in the 1930s. In one robbery, Floyd was described by one of his victims as “a mere boy – a pretty boy with apple cheeks”, words that supposedly earned him the moniker “Pretty Boy”. Just like his contemporary, Baby Face Nelson, Pretty Boy Floyd hated his nickname.

54. Park that’s home to Yogi Bear : JELLYSTONE
Yogi Bear made his debut for Hanna-Barbera in 1958, on the Huckleberry Hound Show before he had own his own series. Do you remember that collar that Yogi wore around his neck? That was a little trick from the animators. By using the collar, for many frames all they had to do was redraw everything from the collar up, saving them lots and lots of time.

58. Samuel of the Supreme Court : ALITO
Associate Justice Samuel Alito was nominated to the US Supreme Court by President George W. Bush. Alito is the second Italian-American to serve on the Supreme Court (Antonin Scalia was the first). Alito studied law at Princeton, and while in his final year he left the country for the first time, heading to Italy to work on his thesis on the Italian legal system.

61. Wisconsin college or its city : RIPON
Ripon, Wisconsin is named for the cathedral city of Ripon in North Yorkshire in England. In 1854, thirty opponents of the Nebraska Act (which had a “pro-slavery” clause) met in a schoolhouse in Ripon and decided to organize a new political party that would reflect their values and interests. They called the new group the Republican Party, choosing a term prominent in the Declaration of Independence. Because of this meeting, Ripon, Wisconsin is one of a small number of cities that claims to be the “Birthplace of the Republican Party”.

Down
1. Volcano viewable from Tokyo : FUJI
Mount Fuji is Japan’s highest, and most famous, mountain. It is an active volcano, situated just west of Tokyo.

4. Chicago trains : ELS
The Chicago “L” is the second largest rapid transit system in the US, with the New York City Subway being the largest. It is also the second oldest, again with the New York Subway system having the honor of being around the longest. Note that the official nickname for the system is the “L” (originally short for “elevated railroad”), although the term “El” is also in common use. (especially in crosswords as “ELS”).

5. Nun’s beads : ROSARY
The Rosary is a set of prayer beads used in the Roman Catholic tradition. The name “Rosary” comes from the Latin “rosarium”, the word for a “rose garden” or a “garland of roses”. The term is used figuratively, in the sense of a “garden of prayers”.

7. Elevator pioneer Elisha : OTIS
Elevators (simple hoists) had been around for a long time. What Elisha Otis did was come up with the “safety elevator”, a design that he showcased at the 1853 World’s Fair in New York. At the Fair he would stand on an elevated platform in front of onlookers and order his assistant to cut the single rope holding up the platform. His safety system kicked in when the platform had only fallen a few inches, amazing the crowd. After this demonstration, the orders came rolling in.

8. “O Sole ___” : MIO
“‘O sole mio” is a famous Italian song from Naples, written in 1898. The lyrics are usually sung in the original Neapolitan, as opposed to Italian. The title translates from Neapolitan into “My Sun” (and not into “O, My Sun” as one might expect). It’s a love song of course, sung by a young man declaring that there is sun brighter than that in the sky, the sun that is his lover’s face.

9. Money in Tokyo : YEN
The three currencies, the Korean Won, the Chinese Yuan, and the Japanese Yen, all take their names from the Chinese written character that represents “round shape”.

13. Gallivants, with “about” : GADS
“Gallivant” is such a lovely word, and is probably a derivative of “gallant”. To gallivant is to gad about, to flirt, wander in search of pleasure or amusement.

23. Light bulb unit : WATT
James Watt was a Scottish inventor, a man who figured prominently in the Industrial Revolution in Britain largely due to the improvements he made to the fledgling steam engine. The SI unit of power is called the watt, named in his honor.

26. Country wedged between France, Belgium and Germany : LUXEMBOURG
Luxembourg is a relatively small country in the middle of Europe, just 100 square miles in area with a population of over half a million. The country is a representative democracy (just like the United Kingdom) and it has a constitutional monarch, namely Henri, Grand Duke of Luxembourg. As such, Luxembourg is the only remaining sovereign Grand Duchy in the world.

27. Gustav who composed “The Song of the Earth” : MAHLER
I’m still trying to keep an open mind when it comes to the music of Gustav Mahler, but I find it hard to appreciate. Mahler was an Austrian composer, active in the late-Romantic period. During his own lifetime he was most notable as a conductor, and his music gained in popularity only after his death in 1911 and is still very popular today … just not with me …

28. Astrological sign of spring : ARIES
Aries is the first astrological sign in the Zodiac, and is named after the constellation. Your birth sign is Aries if you were born between March 21 and April 20, but if you are an Aries, you would know that!

30. Olympian’s blade : EPEE
The French word for sword is épée.

39. Potato, informally : SPUD
The term “spud” used as a slang term for a potato was first recorded in the mid-1800s, in New Zealand would you believe?

40. Things released from Pandora’s box : EVILS
In Greek mythology, Pandora was given a jar and told not to open it under any circumstances. However, her curiosity was too much for her to control, and she opened it allowing the “evils” inside to escape into the world.

50. The “Z” in DMZ : ZONE
A demilitarized zone (DMZ) is usually a border between two countries where military activity is banned according to some treaty between interested parties. The most famous DMZ today has to be the buffer zone between North and South Korea. The Korean DMZ snakes right across the Korean peninsula near the 38th parallel. The center line of the DMZ is where the front was when the ceasefire came into effect in 1953 after the Korean War. According to the armistice signed, all troops had to move back 2,000 meters from the front line on both sides, creating the DMZ that is in place today. Paradoxically perhaps, the areas on either side of the DMZ form the most heavily militarized border in the world.

51. Aardvark’s diet : ANTS
The aardvark is the oddest looking of creatures, a nocturnal, burrowing animal, native to Africa. The name “aardvark” is Afrikaans for “earth pig”, although it is not in fact related to the pig. Aardvarks are noted, among other things, for their unique teeth. The teeth have no enamel and wear away quite readily, but continuously regrow.

55. ___ Lilly and Company : ELI
Eli Lilly is the largest corporation in the state of Indiana. The founder, Eli Lilly, was a veteran of the Union Army in the Civil War, and a failed Mississippi plantation owner. Later in life he returned to his first profession and opened a pharmaceutical operation to manufacture drugs and sell them wholesale. Under Lilly’s early guidance, the company was the first to create gelatin capsules to hold medicines and the first to use fruit flavoring in liquid medicines.

56. Tiny bit : TAD
Back in the 1800s a “tad” was used to describe a young child, and this morphed into our usage meaning a small amount in the early 1900s. The original use of tad to mean a child is very likely a shortened version of “tadpole”.