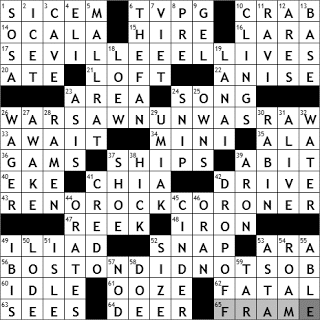 THEME: REVERSALS … each theme answer reads the same from right to left, as it does from left to right:
– SEVILLE EEL LIVES
– WARSAW NUN WAS RAW
– RENO ROCK CORONER
– BOSTON DID NOT SOB
COMPLETION TIME: 11m 03s
ANSWERS I MISSED: 0

1. Command to a Doberman : SIC ‘EM
Sic ’em is an attack order given to a dog, instructing the animal to growl, bark or even bite. The term dates back to the 1830s, with “sic” being a variation of “seek”.

14. Sunshine State city : OCALA
The city of Ocala was founded near a historic village with the same name. In the local Timucua language “Ocala” means “Big Hammock”.

17. Spanish moray still exists : SEVILLE EEL LIVES
Morays are a larger group of about 200 species of eels found across the world’s oceans. They are carnivorous and look pretty scary but they’re quite shy when confronted and present no threat to humans. One interesting thing about morays is that they will sometimes work in cooperation with the grouper fish found in reefs, the two helping each other hunt for food.

The city of Seville is the capital of Andalusia in southern Spain. Seville is a favored setting for many operas including “The Barber of Seville” by Rossini (obviously), “Fidelio” by Beethoven, and Mozart’s “Don Giovanni” and “The Marriage of Figaro”.

24. “Both Sides Now,” for one : SONG
“Both Sides Now” is a very successful song written by Joni Mitchell, most famously recorded by Judy Collins. It has been recorded many, many times by many different artists, including Leonard Nimoy would you believe?

26. Polish sister showed her inexperience : WARSAW NUN WAS RAW
The name “Warsaw” in Polish means “belonging to Warsz”. Legend has it that Warsz, was a fisherman who fell in love with a mermaid called Sawa. It’s a nice story, but actually Warsz was a nobleman from the 12th or 13th century who owned a local village.

35. ___ carte : A LA
On a restaurant menu items that are “à la carte” are priced and ordered separately, as opposed to “table d’hôte” (also called “prix fixe”) which is a fixed-price menu with limited choice.

36. W.W. II pinup features : GAMS
The American slang term “gams” is used for a woman’s legs. The term goes back to the 18th century “gamb” meaning the leg of an animal on a coat of arms.

40. Barely manage, with “out” : EKE
To “eke out” means to “make something go further or last longer”. So, you can eke out your income by cutting back on expenses.

41. “Pet” that’s a plant : CHIA
Chia is a flowering plant in the mint family. A Chia Pet is an invention of the San Francisco company. They did well in the eighties selling terracotta figurines to which were applied moistened chia seeds. The seeds sprout and as they grew the seedlings become the “fur” of the Chia Pet.

49. Tale of Achilles : ILIAD
Achilles is a Greek mythological figure, the main protagonist of Homer’s “Iliad”. Supposedly when Achilles was born his mother attempted to make him immortal by dipping him into the River Styx. As he was held by the heel as he was immersed, this became the only vulnerable point on his body. Years later he was killed when a poisoned arrow struck him in the heel, shot by Paris.

53. Parseghian of the Fighting Irish : ARA
Ara Parseghian coached the Notre Dame football team from 1964 to 1974, a period known as “The Era of Ara”.

56. Red Sox fans mourned tearlessly : BOSTON DID NOT SOB
The Boston Red Sox is one of the most successful Major League Baseball teams and so commands a large attendance, but only when on the road. The relatively small capacity of Boston’s Fenway Park, the team’s home since 1912, has dictated that every game the Red Sox has played there has been a sell out since May of 2003.

1. Member of the 600 home run club : SOSA
Sammy Sosa was right in the public eye in 1998 when he and Mark McGwire were vying to be the first to surpass the home run record held by Roger Maris. McGwire fell out of public favor due to stories of steroid abuse (stories which he later admitted were true) while Sosa fell of out favor when he was found to be using a corked bat in a 2003 game.

2. “Rhyme Pays” rapper : ICE-T
Rapper Ice-T must be sick of having his name come up as an answer in crossword puzzles. Maybe he should have stuck to his real name, Tracy Marrow. Then again, maybe not …

3. Batmobile “garage” : CAVE
The Batmobile was first introduced in the world of comic books in 1939. It started out as a simple, red convertible, with nothing special to recommend it. Over the years though, the car evolved and became more and more sophisticated. The Batmobile always had pride of place in the Batman tales, but once in a while Batman would take the Batplane, Batboat and Batcycle out for a spin.

4. Super Bowl-winning Manning : ELI
Even I know that Eli Manning, and his older brother Peyton, are quarterbacks!

6. Creepy 1981 Lauren Bacall film : THE FAN
The 1981 movie “The Fan” stars Lauren Bacall as a glamorous movie star who is menaced by one of her fans who stalks her. The movie wasn’t received well by the critics, but it garnered a lot of attention as it was released just a few months after John Lennon was murdered by a former fan.

7. ___ Cong : VIET
The Viet Cong was the name of the political and military organization based in South Vietnam that fought the US and South Vietnamese government during the Vietnam War. It was the Viet Cong, as opposed to the North Vietnamese, who launched the famous Tet Offensive in 1968.

12. God in the 49-Across : ARES
The Greek god Ares is often referred to as the Olympian god of warfare, but originally he was regarded as the god of blood-lust and slaughter.

18. MGM mogul Marcus : LOEW
Marcus Loew was a New Yorker, born into a poor Jewish family. He started out in a penny arcade business and used its profits to buy into a nickelodeon. He built a whole chain of movie theaters, and then moved into the production of films so that he could guarantee supply of films that he could show in his theaters. Eventually he pulled together the Metro-Goldwyn-Mayer film production company, sadly passing away just three years after he inked the deal.

19. Maui neighbor : LANAI
Lanai is the sixth largest of the Hawaiian Islands. Lanai was first spotted by Europeans just a few days after Captain Cook was killed on the Big Island of Hawaii in 1779. In 1922, the Hawaiian Pineapple Company bought the whole island of Lanai, and turned most of it into the world’s largest pineapple plantation. Since then, Lanai has been known as “The Pineapple Island”.

28. Japanese noodle dish : RAMEN
Ramen is a noodle dish composed of Chinese-style wheat noodles in a meat or fish broth flavored with soy or miso sauce. It is usually topped with sliced pork and dried seawood.

30. Israeli P.M. after Shamir : RABIN
Yitzhak Rabin was the fifth Prime Minister of Israel, and the first Prime Minister to have been born in the relatively young state of Israel. Rabin was a signatory of the Oslo Accords in 1993, along with PLO Chairman Yasser Arafat, and US President Bill Clinton. Sadly, this led to his death as he was assassinated two years later by right-wing radical who opposed the Accords.

39. Elvis ___ Presley : ARON
Elvis Aron Presley was the younger of two identical twins. His brother was stillborn, delivered 35 minutes before Elvis. The brother was named Jesse Garon Presley. So, though born a twin, Elvis was raised as an only child.

41. Doctrine : CREDO
Credo is the Latin word for “I believe”.

46. Algerian port : ORAN
Oran lies on the Algerian coast, and is famous for being the port where the French Navy was largely destroyed by the British during WWII in order to avoid the French vessels falling into the hands of Nazi Germany after France surrendered. This decisive and unexpected action by the British sent a very strong message around the world that Britain was willing to fight alone against the axis powers if necessary.

49. Sacred bird of ancient Egypt : IBIS
The ibis a wading bird, revered in ancient Egypt. “Ibis” is an interesting word grammatically speaking. You can have one ibis, two ibises and a flock of ibis. And if you want to go with the classical plural, you can have two ibides!

50. Gold streak : LODE
A lode is metal ore deposit that’s found between two layers of rock or in a fissure.

51. Manhattan, for one : ISLE
The island we know as Manhattan was inhabited by the Lenape Indians when the first Europeans explorers arrived in the area. According to the logbook of one of the officers on Henry Hudson’s yacht, the island was called Manna-hata in the local language, from which the modern name derives.

53. Terrier in “The Thin Man” : ASTA
Asta was the wonderful little dog in the superb movie “The Thin Man” starring William Powell and Myrna Loy. In the original story by Dashiell Hammett, Asta was a female Schnauzer, but on screen Asta was played by a wire-haired fox terrier called “Skippy”. Skippy was also the dog in “Bringing up Baby” with Cary Grant and Katherine Hepburn, the one who kept stealing the dinosaur bone. Skippy retired in 1939, so Asta was played by other dogs in the remainder of “The Thin Man” films.

59. La Brea goop : TAR
The La Brea Tar Pits are located right in the heart of the city of Los Angeles. There is a constant flow of tar that seeps up to the surface from underground, a phenomenon that has been around for tens of thousands of years. What is significant is that much of the seeping tar is covered by water. Over many, many centuries animals came to the water to drink and became trapped in the tar as they entered the water to drink. The tar then preserved the bones of the dead animal. Today a museum is located right by the Tar Pits, recovering bones and displaying specimens of the animals found there. It’s well worth a visit if you are in town …