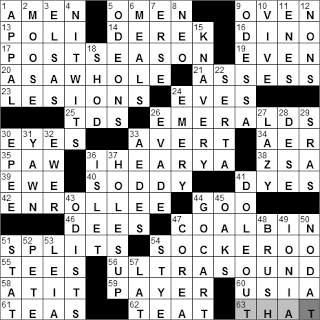 THEME: I HEAR YA! … the themed clues form a word ladder (i.e. changing one letter at a time) that goes from “AMEN to THAT” …

14. Shortstop Jeter : DEREK
Derek Jeter has played his entire professional baseball career with the New York Yankees, and is the team captain.

16. The Flintstones’ pet : DINO
In the Hanna-Barbera cartoon series “The Flintstones”, Dino the pet dinosaur was voiced by the famous Mel Blanc, until his death in 1989.

23. Tissue injuries : LESIONS
A lesion is a wound or any abnormal tissue found in an organism. The word “lesion” comes from the Latin word “laesio” meaning “injury”.

34. ___ Lingus : AER
Aer Lingus, my favorite airline! Well, the service isn’t great, to be honest, but when I get on board an Aer Lingus plane I feel like I am back in Ireland. Aer Lingus is the national airline of Ireland, with Aer Lingus being a phonetic spelling of the Irish “aer-loingeas” meaning “air fleet”. These days Aer Lingus can only lay claim to the title of Ireland’s oldest airline as it’s no longer the biggest. That honor goes to the controversial Ryan Air.

38. When doubled, a Gabor : ZSA
Zsa Zsa Gabor is a Hungarian American actress, born in Budapest as Sári Gábor (the older sister of the actress Eva). Zsa Zsa Gabor has been married a whopping nine times, including a 5-year stint with Conrad Hilton and another 5 years with George Sanders. One of Gabor’s famous quips was that she was always a good housekeeper, as after every divorce, she kept the house! At 94 years of age, Zsa Zsa is pretty sick right now. She had a hip replacement in 2010 and has been in and out of hospital ever since. In January 2011 she had to have her right leg amputated.

41. *Does some batiking : DYES
Genuine batik cloth is produced by applying wax to the parts of the cloth that are not to be dyed. After the cloth has been dyed, it is dried and then dipped into a solvent that dissolves the wax.

51. Dairy Queen orders : SPLITS
Soft serve ice cream was developed by John McCullough in 1938, and he was able to get his new dessert carried by a local ice cream store in Illinois. The store owner and McCullough were so swamped with sales that they opened a store built around the product in Joliet, Illinois, the first Dairy Queen outlet. There are now over 5,700 Dairy Queen franchises in 19 countries. We’ve even got one in Ireland …

56. Ob/gyn’s image : ULTRASOUND
A sonogram is an image made created using ultrasound. “Ultrasound” is the name given to sound energy that has frequencies above the audible range.

60. “Public diplomacy” broadcast org. until 1999 : USIA
The United States Information Agency was established under President Eisenhower in 1953, and continued operating until 1999. It’s mission was “public diplomacy”, another term for propaganda broadcast over radio airwaves. The intent from day one was to avoid having the broadcasts identified as propaganda, and speaking as a former listener over in Europe, there were a lot of fun programs that had one coming back to hear more, but we all knew it was propaganda quite frankly …

Down
2. Simpleton in “Archie” comics : MOOSE
Moose Mason, also called Big Moose, was a recurring character in the “Archie” series of comics. Mason was shown to be poor academically, but great on the sports field. In later comics it was revealed that Moose suffered from dyslexia making it difficult for him to understand what he was being taught. He used to get “straight Fs” in tests, and he thought the F stood for Fantastic …

We’ve often heard the “Bridal Chorus” from Richard Wagner’s opera “Lohengrin”. It’s the tune to “Here comes the bride …” played regularly at the start of wedding ceremonies as the bride walks down the aisle. In the opera the “Bridal Chorus” is sung not at the start of the ceremony but afterwards, by the women of the wedding party as they accompany the Elsa to the bridal chamber.

5. Greek theaters of old : ODEONS
In Ancient Greece, an odeon was like a small theater, with “odeon” literally meaning a “building for musical competition”. Odea were used in both Greece and Rome, for entertainments such as musical shows and poetry readings.

6. Fast-disappearing airline amenities : MEALS
They disappear so quickly because they are so delicious … just kidding …

8. “The Matrix” hero : NEO
The 1999 movie sensation “The Matrix” was meant to be set in a nondescript urban environment. It was actually shot in Australia, as it one of the co-producers was the Australian company, Village Roadshow Picture. You can pick up all sorts of clues about the location when watching the film, including a view of Sydney Harbour Bridge in a background shot. Also, traffic drives along on the left, and there are signs for the “lift” instead of an “elevator”.

9. Black Sea port : ODESSA
The city of Odessa in Ukraine was founded relatively recently, in 1794 by Catherine the Great. The city was originally meant to be called Odessos after an ancient Greek city believed to have been located nearby. Catherine liked the way the locals pronounced the name as “Odessa”, so went with the less Greek sounding name.

11. Hydrocarbon suffixes : -ENES
An alkene is an organic compound made up of carbon and hydrogen atoms. It differs from an alkane in that it has at least one C=C double bond. The simplest alkene is the gas ethylene, a major raw material used in the manufacture of plastics (like polyethylene).

12. Rouen refusals : NONS
Rouen is the major city in Normandy in northern France. During the days of Norman Britain, Rouen was one of the capitals of the Anglo-Norman dynasties. Rouen was also where Joan of Arc was burned at the stake in 1431.

15. Cad’s behavior : KNAVERY
We’ve been using “knave” to mean a cad since about 1200, and as an alternative name for the jack in a deck of cards since the mid-1500s. “Knave” comes from the Old English word “cnafa”, a “boy, male servant”.

22. Sealy competitor : SERTA
Serta was founded in 1931 when a group of 13 mattress manufacturers came together, essentially forming a cooperative. Today, the company is owned by eight independent licensees in a similar arrangement. Interesting …

24. Manicurist’s board : EMERY
Emery is a very hard rock type that is crushed in order to be used as an abrasive. Emery paper is made by gluing small particles of emery to paper. Emery boards are just emery paper with a cardboard backing. And emery boards are used for filing nails, primarily.

29. Mmes., across the Pyrenees : SRAS
According to Greek mythology, Pyrene was a lover of Hercules. Out of the relationship she bore a serpent, which understandably terrified her so she fled into the woods, and there died. Hercules made a tomb for her, piling rocks above it and thereby creating the Pyrenees mountain range, named after Pyrene.

30. Sport with lunges : EPEE
The French word for sword is épée.

33. Dreaded mosquito : AEDES
The Aedes genus of mosquito is the most invasive mosquito in the world. The word “aedes” is an Ancient Greek term meaning “unpleasant, odious” … very apt …

36. Key : ISLET
A key is a low island offshore, also known as a cay (as in the Florida Keys). Our term in English comes from the Spanish “cayo” meaning “shoal, reef”.

43. Horace and Sappho : ODISTS
One of Ancient Rome’s leading lyric poets was Quintus Horatius Flaccus, or “Horace” as we tend to know him.

Sappho was an Ancient Greek poet born on Lesbos much admired for her work, although very little of it survives today.

47. Jazz pianist Chick : COREA
Chick Corea is an American jazz pianist. He is noted for his work in the area of jazz fusion, and for his promotion of Scientology.

49. Ephesus’ region : IONIA
The ancient region of Ionia was located in present day Turkey. Ionia was prominent in the days of Ancient Greece although it wasn’t a unified state, but rather a collection of tribes. The tribal confederacy was more based on religious and cultural similarities rather than a political or military alliance. Nowadays we often refer to this arrangement as the Ionian League.

51. A.S.A.P., in the E.R. : STAT
The exact etymology of “stat”, used to mean “immediately” in the medical profession, seems to have been lost in the mists of time. It probably comes from the Latin “statim” meaning “to a standstill, immediately”. A blog reader has helpfully suggested that the term may also come from the world of laboratory analysis, where the acronym STAT stands for “short turn around time”.

52. “Our Gang” pooch : PETE
Hal Roach made a whole series of comedy shorts with “The Little Rascals”, also known as “Our Gang”. The gang included a Pit Bull Terrier that we should remember, as he had that distinctive ring around his eye. When the dog first appeared on screen, he was called “Pansy”, but the name was soon changed to “Pete the Pup”.