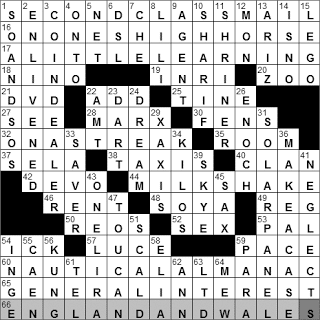 Today’s Wiki-est, Amazonian Googlies
Across
1. It’s now called “Periodicals” : SECOND-CLASS MAIL
There are four classes of mail according to the US Postal Service:

16. Uppity : ON ONE’S HIGH HORSE
The expression “on one’s high horse” stems from the fact that someone of rank tended to ride a “high horse” i.e. a war horse or a charger.

17. Dangerous thing? : A LITTLE LEARNING
The first mention of the expression “a little learning is a dangerous thing”, in print anyway, is from Alexander Pope’s “Essay on Criticism” from 1709:

A little learning is a dangerous thing;
drink deep, or taste not the Pierian spring:
there shallow draughts intoxicate the brain,
and drinking largely sobers us again.

18. Muchacho : NINO
In Spanish a boy is a niño or a muchacho. One can call also an adult male a muchacho, “one of the boys”, but not a niño, as that would be an insult.

19. Cross letters : INRI
The letters on the cross on which Jesus died were INRI. INRI is an acronym for the Latin “Iesus Nazarenus, Rex Iudaeorum”, which translates into English as Jesus the Nazarene (or Galilean), King of the Jews (or Judeans).

21. Blu-ray relative : DVD
A Blu-ray disc looks just like a standard DVD or CD, but it has a lot more capacity for data storage making it an ideal medium for high-definition movies. The name “Blu-ray” comes from the fact that a Blu-ray player uses a “blue laser” to read the disc, unlike a standard DVD which uses a “red laser”.

25. Part of a farm harrow : TINE
A harrow is a farm implement with multiple prongs (tines) that level off the surface of a plowed field as it is dragged across the ground.

28. “The Poverty of Philosophy” author : MARX
Karl Marx was a German philosopher and revolutionary who helped develop the principles of modern communism and socialism. Marx argued that feudal society created internal strife due to class inequalities which led to its destruction and replacement by capitalism. He further argued that the inequalities created in a capitalist society create tensions that will also lead to its destruction. His thesis was that the inevitable replacement of capitalism was a classless (and stateless) society, which he called pure communism.

37. Ward of Hollywood : SELA
Sela Ward turns up in crosswords a lot. She played Teddy Reed in the TV show “Sisters” in the nineties, and was in “Once and Again” from 1999-2002. I don’t know either show, but I do know her from the medical drama “House” in which she played the hospital’s lawyer, and Greg House’s ex-partner. That was a fun role, I thought. Now she has turned up on CSI: NY, a very welcome and much-needed addition to the cast …

44. Frosty’s relative : MILKSHAKE
A Frosty is a frozen dairy dessert created for Wendy’s fast food chain. It’s a little like a milkshake, and has been around since 1969.

48. Kind of bean : SOYA
What are known as soybeans here in the US are called soya beans in most other, English-speaking countries. So, I drink soy milk here in America, but when I am over in Ireland I drink “soya milk”.

50. Auburn competitors : REOS
The REO Motor Company was founded by Ransom E. Olds (hence the name REO). The company made cars, trucks and buses, and was in business from 1905 to 1975, in Lansing, Michigan.

The Auburn Automobile Company started out in 1875 as the Eckhart Carriage Company in Auburn, Indiana. The Auburn brand of cars were produced from 1900 through 1936, with the company eventually going out of business as an Auburn car was just too expensive for the depression-era market.

57. Time starter : LUCE
Henry Luce was a publisher, mainly of magazines. He was responsible for launching such iconic publications such as “Time”, “Life”, “Fortune” and “Sports Illustrated”.

59. R.I.P. part : PACE
R.I.P. is actually an abbreviation for a Latin phrase, “requiescat in pace”, which translates to “may he rest in peace”. The commonly held belief that the acronym stands for the English “rest in peace” isn’t quite correct, not completely anyway …

60. Navigator’s aid : NAUTICAL ALMANAC
A nautical almanac is a book used by navigators, usually at sea. The main content has traditionally been tables of star position designed to help determine one’s position at sea.


66. Union of 1284 : ENGLAND AND WALES
The Principality of Wales was created in 1216 when sovereign princes of Welsh territories agreed that Llywelyn the Great would become the paramount ruler of the region. The Principality covered about two thirds of what we call Wales today, and it gained partial recognition by the English Crown with the title of Prince of Wales being created for Llywelyn the Great and his successors. The relationship between the Principality and its powerful neighbor was an uneasy one though, and eventually there was a military conquest by the English King Edward I in 1282-1283. In 1284 the Statute of Rhuddlan became law which brought all the land held by the Prince of Wales under English rule. And today of course, the title of Prince of Wales is held by the heir to the British throne, Prince Charles.

Down
6. Cable alternative : DSL
DSL originally stood for Digital Subscriber Loop, but is now accepted to mean (Asymmetric) Digital Subscriber Line. DSL is the technology that allows Internet service be delivered down the same telephone line as voice service, by separating the two into different frequency signals.

“Che!” is a 1969 biopic about the life of Che Guevara. It stars Omar Sharif in the title role, and Jack Palance as Fidel Castro. I haven’t seen the film, but apparently it wasn’t well received. Well, an Egyptian (Sharif) playing an Argentine Marxist, and a Ukrainian American (Palance) playing a Cuban revolutionary … it sounds like a disaster waiting to happen …

8. Taylor of “The Haunting” : LILI
Lili Taylor had supporting roles in films like “Mystic Pizza”, “The Haunting” and “Rudy”, and she had a recurring role in the HBO series “Six Feet Under”.

9. Means : AGENT
An agent is the means by which something is done.

10. Star of 7-Down : SHARIF
(7. 1969 biopic starring 10-Down : CHE)
Omar Sharif is the great Hollywood actor from Egypt, who played such memorable roles in the likes of “Doctor Zhivago” and “Lawrence of Arabia”. But to me he is my bridge hero (the card game). In his day he was one of the best players in the world.

11. Fez wearer : SHRINER
The Shriners are an offshoot of the Freemasons. One of the founders was Walter Fleming, who picked up the idea of creating a group with a Middle Eastern theme after witnessing an Arabian musical comedy in Southern France and again in North Africa. He gave the group its name, the Ancient Order of the Nobles of the Mystic Shrine, or Shriners for short.

A fez is that red, cylindrical hat worn mainly in North Africa, and by Shriners here in the US. It used to be very popular right across the Ottoman Empire. The etymology of “fez” is unclear, although it might have something to do with the Moroccan city named Fez.

15. Big name in construction : LEGO
Lego is manufactured by Lego Group, a privately held company headquartered in Billund, Denmark. The company was founded by a carpenter called Ole Kirk Christiansen in 1934, and the now-famous plastic interlocking blocks were introduced in 1949, sold as “Automatic Binding Bricks”. I think “Lego” is easier to remember! The name “Lego” comes from the Danish term “leg godt” meaning “play well”.

26. Violinist/bandleader ___ Light : ENOCH
Enoch Light was a classical violinist, and a bandleader. He was also quite the recording engineer and went to great lengths (starting as early as the late fifties) to get the best sound experience for listeners to his recordings. In particular he was one of the first to use stereo effects to create an apparent spatial separation between instruments Unfortunately, he didn’t get much air time on the radio, as AM stations only broadcast in mono back then.

34. Bust finds : KILOS
Kilos of illegal substances can be found in drug busts.

39. Island along Cuillin Sound : SKYE
The Isle of Skye is off the northwest coast of Scotland in the Inner Hebrides. It is the second largest island in the country, and has been linked to the mainland by a road bridge since 1995. I’ve never been there, but I hear the views are spectacular.

43. 100 centesimi : ONE LIRA
The Italian Lira was divided into one hundred centisimi (singular: centisimo). The name comes from the Latin word for “hundreth” (centesimus).

45. Musical instrument inventor Adolphe : SAX
The saxophone was invented by Belgian, Adolphe Sax. Sax developed lip cancer at one point in his life, and one has to wonder if that was related to his saxophone playing (I am sure not!). I had the privilege of visiting his grave in the Cemetery of Montmartre in Paris a few years ago.

47. Bird on a Kellogg’s cereal box : TOUCAN
Toucan Sam is the mascot of Kellogg’s Froot Loops breakfast cereal, and he can be seen on the front of every box.

55. Normandy city : CAEN
Caen, on the River Orne, lies in the Calvados department of France in the northwest of the country. Caen is famous for the WWII Battle of Caen that left the town practically destroyed. Caen is also the burial place of the Norman King William I of England, also known as William the Conqueror after his victory at the Battle of Hastings in 1066.

56. ___ fu : KUNG
In the west we sometimes use the term kung fu to mean a Chinese martial art. We’ve gotten the wrong idea though, as the term “kung fu” really describes any skill that can be learned through dedication and hard work. So, kung fu can indeed describe a martial art, but by no means exclusively.

61. ___ el Amarna, Egypt : TEL
Armana is an archaeological site on the east bank of the Nile River in Egypt, almost 200 miles south of Cairo. The ancient city is also known as el-Armana, and Tel el-Armana, although the use of “Tel” is apparently incorrect. “Tel” commonly appears in names in the region (Arabic for “hill”) but should not apply to Amarna as the site is perfectly flat.

62. Author Beattie : ANN
Ann Beattie is a short story writer and novelist. Her first novel was “Chilly Scenes of Winter” first published in 1976. It was adapted for the big screen in 1979 and released under the same title and also under the name “Head Over Heels”.

63. Former Ford : LTD
There has been a lot of speculation about what the acronym LTD stands for in the car model “Ford LTD”. Many say it stands for Luxury Trim Decor, and others that it is an abbreviation for “limited”. Although the car was produced in Australia with the acronym meaning Lincoln Type Design,  it seems LTD was originally chosen as just three meaningless letters that sound good together.

64. Small gull : MEW
What we call the Mew Gull here in North America is related to the Common Gull of Europe and Asia.