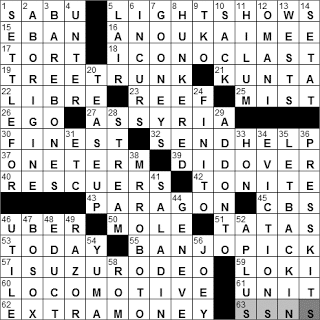 1. Star of India, once : SABU
The 1937 British film “Elephant Boy” starred a young, Indian elephant driver called Sabu Dastagir. Sabu (he was often known just be the one name) made more British films over the next few years, including “The Thief of Baghdad” in 1940 and the 1942 version of “The Jungle book”. Sabu moved to Hollywood, and became a US citizen in 1944. He joined the US Army Air Force and served as a tail gunner in the Pacific, and was awarded the Distinguished Flying Cross for his valor and bravery. Sadly, in 1963 Sabu died of a heart attack, at only 39 years of age.

15. 29-year Knesset member : EBAN
Abba Eban was an Israeli diplomat and politician, born Aubrey Solomon Meir Eban in Cape Town. While working at the United Nations after WWII he changed his name to “Abba”, the Hebrew word for “father”, apparently as he could see himself as the father of the nation of Israel.

16. “Prêt-à-Porter” actress : ANOUK AIMEE
Anouk Aimée is a French film actress. Her most famous film outside of France is probably the internationally successful French hit from 1966, “A Man and a Woman”, in which she played the female lead.

“Prêt-à-Porter” is a 1994 Robert Altman movie, a black comedy about the Paris fashion scene. “Prêt-à-Porter” is a common enough phrase over in Europe, a French expression meaning “ready to wear” that has made it into a number of other languages including English. As the expression is less common over here in America the film was released as “Ready to Wear”. The title just doesn’t have the same ring to it though, does it?

17. Material for a suit? : TORT
The word “tort” comes to us directly from the French word, meaning “mischief, injury or wrong”. It’s a fitting word, as tort law is generally about negligence, when the action of one party causes injury to another, in an action that is outside of the scope of criminal law.

18. Convention fighter : ICONOCLAST
Iconoclasm is the deliberate destruction of society’s icons, either religious or cultural. The term applies more to a rebellious action from within a society, as opposed to an act by external forces invading another culture. As such, the term “iconoclast” has come to have a broader meaning, describing anyone who stands up against established convention.

21. “Roots” name : KUNTA
Not only did Alex Haley write the magnificent novel “Roots”, but he was also the collaborator with Malcolm X on his “The Autobiography of Malcolm X”. His 1976 novel “Roots” is based on Haley’s own family history, and he claimed to be a direct descendant of the real life Kunta Kinte, the slave who who was kidnapped in the The Gambia in 1767. If you remember the fabulous television adaptation of “Roots”, you might recall that Kunta Kinte was played by LeVar Burton, who later went on to play another famous role, Geordi La Forge on “Star Trek: the Next Generation”.

27. Where the biblical lost tribes were held captive : ASSYRIA
Assyria was an ancient kingdom located on the Upper Tigris river in Mesopotamia (modern-day Iraq), named for it’s capital city of Assur. According to the Bible, of the original Twelve Tribes of Israel, Ten Tribes “disappeared” when the Kingdom of Israel was destroyed by the Assyrians in 720 BCE.

37. What Taft, Hoover and Carter each had : ONE TERM
William Howard Taft may have been the 27th President of the United States, but his lifelong ambition was to be Chief Justice of the Supreme Court. President Taft was able to realize that dream in 1921, eight years after losing his bid for re-election as president. As Chief Justice, this former US President swore in two new presidents, Calvin Coolidge (in 1925) and Herbert Hoover (in 1929).

President Herbert Hoover was born in West Branch, Iowa, the only president to have been born in that state. His birthplace is now a National Landmark, and President Hoover and his wife are buried there, in the grounds of the Herbert Hoover Presidential Library and Museum. President Hoover died at the age of 90 years old in 1964 outliving his nemesis, Franklyn Delano Roosevelt, by almost 20 years.

President Jimmy Carter was the 39th President, and the only US president to receive the Nobel Peace Prize after leaving office (Presidents Theodore Roosevelt, Woodrow Wilson and Barack Obama have also been so honored, but while in office). President Carter’s popularity in the country greatly eroded during his time in office, largely due to the Iran hostage crisis. This led to an unsuccessful attempt by Ted Kennedy to win the Democratic Party nomination for the 1980 presidential election, and Carter’s ultimate defeat by Republican Ronald Reagan. Within minutes of President Carter leaving office, the American hostages in Iran were released.

42. “Rock Me ___” (1984 hit) : TONITE
“Rock Me Tonite” is the most successful single from the American rock musician Billy Squier. The song was released in 1984, and the accompanying music video features Squier dancing around a room in a pink tank top. The music video often makes it onto “worst music videos ever” lists.

43. One worthy of emulation : PARAGON
A paragon is an model of excellence, a peerless example. Ultimately the term derives from the Greek “para-” meaning “on the side” and “akone” meaning “whetstone”. This derivation comes from the ancient practice of using a touchstone to test gold for its level of purity by drawing a line on the stone with the gold and comparing the resulting mark with samples of known purity.

57. Onetime Chevy Blazer competitor : ISUZU RODEO
Isuzu is a Japanese auto manufacturer, very successful in the medium and heavy truck market in particular. You’ll be seeing fewer and fewer Isuzu passenger cars on American roads though, as the company exited the US passenger car market in 2008. The Isuzu Rodeo is a pick-up truck made between 1988 and 2002, and sold in the US as the Isuzu Pickup and Chevrolet LUV. “Rodeo” was the model name used back in Japan.

59. Mythological trickster who was punished by being held to a rock : LOKI
Loki is a god appearing in Norse mythology. In one story about Loki, he was punished by other gods for having caused the death of Baldr, the god of light and beauty. Loki is bound to a sharp rock using the entrails of one of his sons. A serpent drips venom which is collected in a bowl, and then his wife must empty the venom onto Loki when the bowl is full. The venom causes Loki great pain, and his writing results in we poor humans experiencing earthquakes.

61. Peck, e.g. : UNIT
A peck is a unit of dry volume, equivalent to two gallons. Four pecks then make up a bushel.

62. What loaded people have : EXTRA MONEY
That must be nice …

63. Strings used in payroll depts. : SSNS
The main purpose of a Social Security Number is to track individuals for the purposes of taxation, although to me it is looking more and more like an “identity number” these days due to its ubiquitous use. The social security number system was introduced in 1936. Before 1986, a SSN was required only for persons with substantial income, so many children under 14 had no number assigned. There was concern that a lot of people were claiming children as dependents on their tax forms who did not exist, so from 1986 onwards it was a requirement to get a SSN for any dependents over the ago of 5. Sure enough, in the following year’s tax returns, seven million dependents “disappeared”.

2. Native : ABORIGINE
Even though the term “aborigine” is often associated with the indigenous peoples of Australia, in the widest sense “aboriginal” refers to any indigenous race. The Aborigines were a people in Roman mythology, the oldest inhabitants of central Italy.

7. Dingbats : GOONEYS
The use of the word “dingbat” to describe a foolish person has been around since the early 1900s. It was popularized in the seventies by the character Archie Bunker on TV’s “All in the Family”. Over the years, “dingbat” has been used as a name for many different things though, including money, a professional tramp, and even a muffin.

9. What stops swings, briefly : TKO
In boxing (and other sports), a knockout (KO) is when one of the fighters can’t get up from the canvas within a specified time, usually 10 seconds. This can be due to fatigue, injury, or the participant may be truly “knocked out”. A referee, fighter, or doctor may also decide to stop a fight without a knockout, especially if there is concern about a fighter’s safety. In this case, the bout is said to end with a technical knockout (TKO).

12. Sur citizen : OMANI
The city of Sur is a regional capital in northeastern Oman, sitting right on the coast on the Gulf of Oman.

13. Bridge openers : WESTS
In the game of bridge, the four players around the table are often named after the points of the compass. Anyone can open the bidding, so sometimes it’s West.

28. Course : STREAM
The verb “to coarse” means “to stream, to move quickly through or over”.

31. “That sorta thing” : ETC
Et alii and et cetera have similar meanings, with et cetera being used in place of a list of objects, and et alii used for a list of names.

41. Sultan who captured Jerusalem in 1187 : SALADIN
Saladin was a Kurdish Muslim who at one point ruled over Egypt, Syria, Mesopotamia, Hejaz and Yemen. He was the nemesis of the Christian Crusaders, famously earning the respect of Richard the Lionheart for his chivalrous behavior.

48. Drawn-out chemical : EDUCT
In the world of chemistry, a substance that is separated from another, without changing it chemical composition, is known as an educt. The verb “to educe” means “to draw out, elicit”.

54. Arizona county or its seat : YUMA
The city and county of Yuma take their name from the Quechan (aka Yuma) Native American tribe that inhabited the area.

56. Bouncing baby : JOEY
“Joey” is the name given to all infant marsupials, not just kangaroos. No one really seems to know for sure what the etymology is of the term “joey”.

58. Kind of chip : ROM
A chip or other storage device that is labeled “ROM” is Read Only Memory, meaning that you can’t easily “write” information, just “read” it.