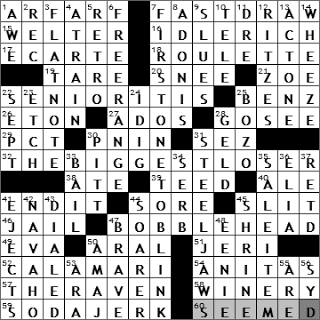 Across
15. Confusion : WELTER
A “welter” is a jumble of confused mass, and comes from the Middle English verb “welteren”, meaning “to toss about, especially in high seas”.

17. Game with tricks : ECARTE
Écarté is a card game that comes to us from France, with a name that translates into ‘discarded”. It is a game like Whist, but is played with a stripped-down deck.

18. Literally, “small wheel” : ROULETTE
The name “roulette” means “little wheel” in French, and the game as we know it today did in fact originate in Paris, in 1796.

19. Word on a scale : TARE
“Tare” is the weight of a container, deducted from the gross weight to determine the net weight of the container’s contents.

20. Old dirk : SNEE
“Dirk” is the Scots word for dagger, and is the name given to a knife that is worn hanging from a belt in traditional dress that includes a kilt. The dagger worn in the sock isn’t a dirk (as is supposed by many) but rather is called a “sgian dubh”, “a black or hidden knife”.

A “snee” is a type of dagger formerly used by Scottish highlanders.

21. Tony winner Caldwell : ZOE
Zoe Caldwell is an Australian-born actress who has won four Tony Awards for her performances on Broadway.

22. High-class affliction? : SENIORITIS
Senioritis is the colloquial name given to the tendency of some senior students to lose motivation to study as they come near to the end of perhaps their high school or college careers.

25. Patent-Motorwagen inventor : BENZ
It is generally accepted that Karl Benz invented the internal combustion engine, although others were doing similar work around the same time. He certainly was awarded the first patent for an automobile, in 1886. His first automobile, the Patent-Motorwagen, couldn’t get up hills unaided so his wife, Bertha Benz, suggested the introduction of gears. Sure enough, the next model had two gears. Behind every successful man …

26. Historic institution near Slough : ETON
The world-famous Eton College is just a brisk walk from Windsor Castle, which itself is just outside London. Eton is noted for producing many British leaders, including David Cameron who took power in the recent UK general election. The list of Old Etonians also includes Princes William and Harry, the Duke of Wellington, George Orwell, and the creator of James Bond, Ian Fleming.

30. Nabokov novel : PNIN
“Pnin” is a novel written in English by Vladimir Nabokov, and published in 1957. The title character is Timofey Pnin, a Russian-born professor living in the US. “Pnin” raised some money for Nabokov as it was published in installments in “The New Yorker” magazine. He needed the money while he worked hard to find someone to publish his more edgy novel, “Lolita”.

32. Show in which many pots disappear? : THE BIGGEST LOSER
“The Biggest Loser” is an enormous (pun intended!) phenomenon at this point, with at least 25 versions of the show appearing around the world. It seems to be doing a lot of good for folks even beyond those losing on the show, with spin-off programs in communities all over America. But, it’s not all good news. The first season’s winner lost 122 pounds in two months, 37% of his starting body weight, but since then he gained back all the weight. That’s a shame …

41. Send a Dear John letter : END IT
Apparently the term “Dear John letter” originated in WWII among American troops who were serving abroad. The servicemen highly valued letters from girlfriends and wives back home, and almost invariably those missives started out with “Dearest”, or “My Darling” or some other expression of affection. A curt, “Dear John” set the tone for a letter which was likely to contain news of a new love interest in the life of the girlfriend or wife.

45. Turtle’s eye, often : SLIT
Many turtles have eyes that are shaped like slits. Remember those slit-eyes on the Teenage Mutant Ninja Turtles? That’s proof …

47. Bouncer in a sports stadium? : BOBBLEHEAD
Bobblehead dolls are those little toys with big heads that bobble around if tapped, while the body remains still. They’re often given to ticket buyers at sports events as a promotion.

50. District in southern Kazakhstan : ARAL
The capital of the Aral district in Kazakhstan is the city of Aral, once a fishing port and harbor on the coast of the Aral Sea. However, since the Aral Sea has shrunk in size Aral is now landlocked, with the sea 12km away from the city.

The Aral Sea is another great example of how man can have a devastating effect on the environment. In the early sixties the Aral Sea covered 68,000 square miles of Central Asia. Soviet Union irrigation projects drained the lake to such an extent that today the total area is less than 7,000 square miles, with 90% of the lake now completely dry. Sad …

51. Ryan of “Star Trek: Voyager” : JERI
Jeri Ryan’s most famous role is that of the de-assimilated Borg known as Seven of Nine, on “Star Trek: Voyager”. I haven’t seen that show, so I know Ryan from a supporting role on the legal drama “Shark”, playing opposite James Woods.

54. Novelist Diamant and others : ANITAS
The author Anita Diamant’s best known work is the 1997 novel “The Red Tent”, which was a New York Times best seller. Diamant’s novels and non-fiction books tend to explore Jewish culture in America.

57. It uses 20 different end rhymes for “ore” : THE RAVEN
“The Raven” is a narrative poem by Edgar Allen Poe, and tells of a student who has lost the love of his life, Lenore. A raven enters his bedchamber and perches on a bust of Pallas. The raven can talk, to the student’s surprise, but says nothing but the word, “nevermore”. As the student questions all aspects of his life, the raven taunts him with the same comment, “nevermore”. Finally the student decides that his soul is trapped beneath the raven’s shadow and shall be lifted “nevermore” …

59. Float maker : SODA JERK
In the halcyon days of yore, a “soda jerk” was usually a young person whose main job was to serve ice cream sodas in a drugstore. The server would “jerk” the handle on the soda fountain to dispense the soda water, giving the job its distinctive name.

Down
2. Ping-Pong or dancing, for short : REC
Ping-pong and dancing are forms of recreation.

4. “Quickest way to Harlem,” in song : A TRAIN
The A Train in the New York City Subway system, runs from 207th Street, through Manhattan, and over to Far Rockaway in Queens. The service lends its name to a jazz standard “Take the A Train”, the signature tune of Duke Ellington and much sung by Ella Fitzgerald. One version of the lyrics is:

8. Male doll : ADONIS
In Greek mythology Adonis is a beautiful, young god loved by Aphrodite. He dies in a hunting accident (gored by a boar), but not before he gives Aphrodite a child. Adonis was originally a Phoenician god (Phoenicia is modern day Lebanon) “absorbed” into Greek lore. The child born of Adonis to Aphrodite was called Beroe, after which is named Beirut, the capital city of Lebanon.

10. TV segment : TELE
Our all too common word “television” dates back to 1907. The word is of course derived from “tele-” and “vision”. The prefix tele- denotes “far, far off” as used in “telescope” for example. The idea behind the word television is that it describes the ability to look at something that is happening at a place (e.g. a studio) some distance away from the viewer. Interesting, huh?

12. Alternatives to Triscuits : RITZES
I’ve always liked Ritz crackers. They’ve been around since 1934 when they were introduced by Nabisco. The name Ritz was chosen because the marketing folks felt that the association with Ritz-Carlton would evoke images of wealth and the high life.

25. Chowderhead : BOZO
A “bozo” is a man with low IQ, and one who is usually quite muscular. We’ve been using the word since the early 1900s, and it possibly comes from the Spanish “bozal” that was used to describe someone who speaks Spanish poorly.

The word “chowderhead”, applied to someone who is regarded as stupid, has nothing to do with chowder at all. Rather, it is a corruption of an older term “cholter-head” meaning the same thing, of unknown origin.

28. Deprive of vitality : GELD
We can use the verb “to geld” to mean “to weaken, deprive of strength”. The term comes from the act of gelding an animal, castration of the male. “Geld” comes from the Old Norse word “gelda” meaning “castrate”.

30. British leader in the Seven Years’ War : PITT
William Pitt was Prime Minister of Britain from 1766 to 1768. He lent his name to the city of Pittsburgh, Pennsylvania.

What the British call the Seven Years’ War is usually called the French and Indian War over here in the US. In the broader context, the war was fought between alliances led by Britain and France, and in the American theater was fought between British and French forces alongside their Native American allies.

34. Dinar earner : SERB
The Dinar is the official currency in many countries, such as Iraq and Serbia. The Gold Dinar dates back to the early days of Islam, with the name deriving from the Roman currency called “denarius” meaning “ten times” (as it was originally a coin worth ten asses).

Serbs are an ethnic group native to the Balkans in southeastern Europe. Although the Serbs exist as minority groups in many countries in the region, they are the majority ethnic group in Serbia, in Montenegro and in Bosnia and Herzegovina.

36. “Old China” essayist : ELIA
The “Essays of Elia” began appearing in the “London Magazine” in 1820, and were immediate hits. Elia was actually a clerk, and a co-worker of Charles Lamb, and it was Lamb who was the author, not Elia. The most famous of the essays in the collection are probably “Dream-Children” and “Old China”.

37. Like many offs. : RETD
Many officers are retired now.

41. Red-cards, say : EJECTS
A series of colored penalty cards is used by referees and umpires in many sports, most notably in soccer. The cards were first used in the 1970 FIFA World Cup in Mexico in response to language difficulties that created confusion during the prior competition in 1966. The main cards used are a yellow card indicating a caution, and a red card indicating expulsion from the game.

42. Adjective-less language : NAVAHO
There are more speakers of the Navajo (also Navaho) language than any other Native American language north of the US-Mexico border. Famously, the Navajo language was used by the “code talkers” in the Pacific War during WWII to send secure communications over radio. These Navajo “coded” messages were used in fast, tactical communications, with one bilingual Navajo speaker talking over the radio to another speaker, with the two acting as translators at either end of the conversation. The Navajo code was never broken by the Japanese.

50. Setting of Mozart’s only clarinet concerto: Abbr. : A MAJ
Mozart’s Clarinet Concerto in A major is one of my favorite works by the great Austrian composer. It was one of Mozart’s last works, completed just a few months before he passed away in December of 1791.

53. Neighbor of Scorpius : ARA
The constellation of Ara takes its name from the Latin word for “altar”.

56. Folk rock singer Straw : SYD
Syd Straw is a rock singer and songwriter, who started out as a backup singer for Pat Benetar. Don’t know her …