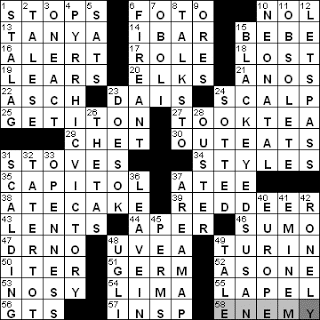 10. ___ pros. (court record abbr.) : NOL.
“Nolle prosequi” is a Latin phrase that translates literally as “to be unwilling” (nolle) “to pursue” (prosequi). In the arena of law, a declaration of nolle prosequi (shortened to nol. pros.) by a plaintiff or prosecutor is a declaration that all or part of the case will be dropped.

13. Actress Roberts : TANYA
Tanya Roberts is an actress that was regarded as somewhat of a sex symbol in the eighties in Hollywood. She played one of TV’s “Charlie’s Angels” for the last season of the show, and was a Bond girl opposite Roger Moore in 1985’s “A View to a Kill”.

15. Nixon pal Rebozo : BEBE
Charles “Bebe” Rebozo was a banker, and a longtime friend of President Richard Nixon. The two met when US Representative Nixon was vacationing in Key Biscayne in 1950, as Rebozo was asked to take Nixon deep sea fishing. A friendship developed that lasted the whole of Nixon’s lifetime. Rebozo was a banker living in Florida, and so the two friends often saw each at the President’s Key Biscayne compound.

19. 1980s-’90s women’s magazine : LEAR’S
“Lear’s” was a women’s magazine that was published from 1988 until 1994. It used the slogan, “For the woman who wasn’t born yesterday” and had a target audience of women over the age of 35. The magazine was published by, and named after, Frances Lear, wife of television producer Norman Lear.

Sholem Asch was a Polish-born American novelist and dramatist who published his work in Yiddish. One of his plays was “God of Vengeance”, a highly regarded work performed all over Europe, and translated into many languages. It opened on Broadway in 1923, but the adult themes (it was set in a brothel, and featured a lesbian relationship) led to the entire cast being arresting and convicted on obscenity charges.

23. Setting for a roaster : DAIS
The use of the word “roast” to mean “make fun of affectionately” goes way back, to the early 1700s.

29. Lemon on a baseball field : CHET
Chet Lemon is a retired baseball player, who mainly played center field for the Chicago White Sox (1975-1981) and the Detroit Tigers (1982-1990). In his retirement, Chet lives in Florida and coaches two youth teams, both called “Chet’s Lemon Juice”. Cute …

38. Did as suggested in a Gershwin musical? : ATE CAKE
“Let ‘Em Eat Cake” is a Broadway musical by George and Ira Gershwin, that was first performed in 1933. The show was a sequel to the smash hit “Of Thee I Sing”, but it was a sequel that the public didn’t take to at all and it closed pretty soon after opening.

43. Spring times : LENTS
In Latin, the Christian season we now call Lent was termed “quadragesima”, a reference to the forty days that Jesus spent in the desert before beginning his public ministry. When the church began its move in the Middle Ages towards using the vernacular, the term “Lent” was introduced. “Lent” comes from “lenz”, the German word for “spring”.

46. Heavyweights face off in it : SUMO
Sumo is a sport that is practiced professionally only in the country of its origin, Japan. There is an international federation of sumo wrestling now, and one of it’s aims is to have the sport accepted as an Olympic event.

47. Crab Key villain of book and film : DR. NO
“Dr. No” may have been the first film in the wildly successful James Bond franchise, but it was the sixth novel in the series of books penned by Ian Fleming. Fleming was inspired to write the story after reading the Fu Manchu tales by Sax Rohmer, and if you’ve read the books or seen the films, you’ll recognize the similarity in the characters.

48. Ciliary body setting : UVEA
The ciliary body is a layer of spherical tissue on the inside of the eyeball. It produces the fluid that fills the eyeball, and it also has muscles attached to the eye’s lens. These muscles adjust the shape of the lens causing it to change focus. The uvea is a larger layer of tissue, also spherical, of which the ciliary body is part.

49. Locale shrouded in mystery? : TURIN
The Shroud of Turin has to be one of the most controversial, and most studied, human artifacts ever unearthed. The Shroud is a linen cloth on which there is the image of a man who appears to have wounds inflicted by crucifixion. Many believe that the Shroud is the burial cloth in which Jesus Christ was placed after he died on the cross. The Shroud was kept in various locations in France for centuries before being moved to Turin Cathedral in 1578, from which it gets its name, and where it has been located ever since.

54. Succotash bit : LIMA
The main ingredients in succotash are corn and lima beans, although in parts of the South, succotash can be made of any collection of vegetables prepared with lima beans and topped with butter.

Down
1. Compound used in wartime : STALAG
Stalag was the term used for a prisoner-of-war camp in Germany. Stalag is an abbreviation for Stammlager, which in turn is the short form of Mannschartsstamm und Straflager, literally meaning “crew master and prison camp”.

3. Like Sartre’s “No Exit” : ONE ACT
“Huis Clos” means “behind closed doors” in French. It is the title of the Jean-Paul Sartre play that we in the English speaking world would better recognize as “No Exit”. The play features four characters who are trapped in a room that they discover is actually located in Hell. One of the characters is Estelle Rigault, a society woman who married her husband for her money, and then has an affair that results in a child whom she murders. Heavy stuff …

4. Win offset by losses : PYRRHIC VICTORY
A Pyrrhic victory is one which comes a great cost, perhaps one that was not worth fighting for in the first place. The name comes from King Pyrrhus of Epirus, a ruler of a land in southern Europe that fought two devastating battles with the Romans. Pyrrhus won both engagements, but the loss of men was so great that it left him unable to match the Romans in the next battle. As Pyrrhus recorded himself, the Romans lost more men, but they had plentiful reinforcements and he had not. He enjoyed a Pyrrhic victory …

5. Their scores may be on transcripts : SATS
Today the standardized test for admission to colleges is known as the SAT Reasoning Test, but it used to be called the Scholastic Aptitude Test and Scholastic Assessment Test, which led to the acronym SAT.

6. Colonial stinger : FIRE ANT
Fire ants are stinging ants. Most stinging ants bite their prey and then spray acid on the wound. The fire ant, however, bites to hold on, and then injects an alkaloid venom from its abdomen, creating a burning sensation in humans that have been nipped.

7. Old Greek coins : OBOLI
An obol is also known as an obolus. It was a silver coin used in Greece, and worth one sixth of a drachma.

15. A state symbol of Maryland : BLACK-EYED SUSAN
Black-eyed Susan is the name given to a number of herbs and garden flowers native to North America, all members of the sunflower family. They have flowers with yellow petals and a brown center.

24. In one’s cups : SOTTED
The expression “in one’s cup” meaning “drunk” is used in Ancient Roman literature, and even in the Bible. Stay away from that cup …

26. Trig symbols : THETAS
The Greek letter theta is commonly used in geometry to represent the angle between two lines (say at the corner of a triangle).

28. Dispossession : OUSTER
An “ouster” is the noun from the verb “to oust”, meaning an ejection or expulsion.

32. Deep-fried mouthful : TATER TOT
Ore-Ida founders came up with the idea for Tater Tots when they were deciding what to do with residual cuts of potato. They chopped up the leftovers, added flour and seasoning, and extruded the mix through a large hole making a sausage which they cut into small cylinders. We eat 70 million pounds of this extruded potato every year!

40. Grand tour setting : EUROPE
The Grand Tour was a rite of passage for young, wealthy men, especially in the 18th century. Rich families (especially the English) would send off their sons after finishing their schooling to be exposed to the various cultures across Europe. Essential stops along the way were Paris, Venice and Rome. Can’t think why so few stopped off in Dublin …

41. 2009 Grammy winner for “Relapse” : EMINEM
Eminem’s real name is Marshall Mathers, a native of Saint Joseph, Missouri. He grew up poor, raised by his mother alone as the family was abandoned by his father when he was 18 months old. Marshall and his mother moved around the country before settling in a suburb of Detroit. He didn’t do well at school, and dropped out at the age of 17. But, in the end, he made it very big …

42. Miss America host after Bert Parks : RON ELY
Ron Ely is most famous for playing the title role in the TV series “Tarzan” in the sixties. When longtime host Bert Parks retired, Ely hosted the 1980 and 1981 “Miss America” pageants, before the job was taken over by Gary Collins.

45. Salon jobs : PERMS
A perm is the name given to the permanent wave, a chemical or thermal treatment of hair to produce waves, curls or even to straighten hair. I don’t worry about such things … No.1 all over …

48. Aptly named hybrid : UGLI
The ugli fruit is a hybrid of an orange and a tangerine, first discovered growing wild in Jamaica, where today most ugli fruit originates.