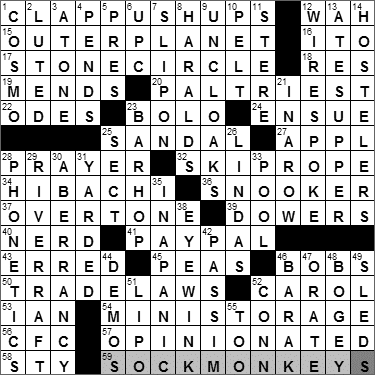 Across
1. Calisthenics for show-offs : CLAP PUSH-UPS
A “clap push-up” is a push-up accompanied by a quick clap of the hands, just to make it a little more work. It’s not something I’ve ever done, because I don’t like to show off! Yeah, that’s the reason …

15. Saturn, for one : OUTER PLANET
There are four outer planets, the four in our solar system with orbits outside that of Mars:

17. European neolithic monument : STONE CIRCLE
Growing up in Ireland, I am very familiar with stone circles, as they are found all over the country. They were probably erected for religious, ceremonial purposes, with some being over 5,000 years old.

18. Lawyer’s thing : RES
“Res” is the Latin for “thing”. “Res” is used in a lot of phrases in the law, including “res ipsa loquitur”. The literal translation of “res ipsa loquitur” is “the thing speaks for itself”. It refers to situations when there is an injury, and the nature of the injury is such that one can assume that negligence had to have taken place.

20. Least : PALTRIEST
The adjective “paltry” comes from an older use of “paltry” as a noun, meaning a “worthless thing”.

23. ___ tie : BOLO
I’ve never worn a bolo tie, and was surprised to discover that they are a relatively recent invention. The first one was apparently produced in Wickenburg, AZ in the late 1940s by a silversmith. It takes its name from the boleadora, an Argentine lariat.

25. Bit of centurion gear : SANDAL
A centurion was a professional officer in the Roman army. A centurion was in command of a “centuria”, a group of about one hundred men.

34. Coal holder : HIBACHI
The traditional hibachi in Japan is a heating device, often a ceramic bowl or box that holds burning charcoal. This type of hibachi isn’t used for cooking, but as a space heater (a brazier). Here in the US we use the term hibachi to refer to a charcoal grill used as a small cooking stove, which in Japanese would be called a “shichirin”.

36. British form of 33-Down : SNOOKER
33. See 36-Across : POOL
Snooker is a fabulous game, played on what looks like a large pool table, 12 x 6 feet if full size. Snooker is a derivative of the older game of billiards, and is believed to have been developed by British Army officers who were stationed in India in the latter half of the 1800s. “Snooker” was a word used in the British military for first-year cadets and for inexperienced soldiers. Somehow that usage morphed into the name of the game.

39. Widows’ allowances : DOWERS
Originally, a dowry was money that was set aside by a man for his wife and children, to be used in the event that he passed away. Over time “dowry” became a term used for the money, goods or estate that a woman brought into a marriage.

40. Many a character on “The Big Bang Theory” : NERD
“The Big Bang Theory” is a wonderful sitcom that has been airing on CBS since 2007. There are a lot of high-powered equations and math in the show’s dialog, but it is all checked by a professor of physics and astronomy at UCLA.

41. Web site with the subheading “Merchant Services” : PAYPAL
PayPal has been around since the year 2000, and was born out of a merger of two older companies: Confinity and X.com. PayPal was so successful that is was the first of the beleaguered dot.com companies to successfully complete an IPO after the attacks of 9/11. Then, in 2002, PayPal was bought by eBay, for a whopping $1.5 billion.

43. Overthrew, e.g. : ERRED
An overthrow in baseball is clocked up as an error.

45. Samosa ingredients : PEAS
A samosa is quite a nice appetizer, usually a triangular-shaped savory that often has a vegetarian filling. The word “samosa” is primarily used on Indian menus, and the name comes from “sanbosag”, the name for the dish in Persia.

46. Some fishing gear : BOBS
A bob or a bobber, also known as a float, is used in fishing. It really serves two purposes: it suspends the hook at a predetermined depth, and it also acts as an indicator of a bite.

52. Air traveling over snow? : CAROL
What a nice clue! The word “carol” comes into English via the Old French word “carole”, which meant a “dance in a ring”. When “carol” made it into English, about 1300, it was used to describe a dance, as well as a joyful song. Around 1500 AD carols came to be associated with Christmas.

53. Actor Somerhalder of “Lost” : IAN
Ian Somerhalder had his big break as an actor in the TV drama “Lost”, and now has a part in TV’s “The Vampire Diaries”.

56. Freon initials : CFC
ChloroFluoroCarbons were the propellants that used to be in aerosols. They make their way up into the ozone layer and trigger a chain reaction that converts ozone (O3) into regular oxygen (O2). Regular O2 is good stuff, but we need O3 to absorb harmful UV radiation raining down on us. CFC … not good stuff …

58. “Animal Farm” locale : STY
“Animal Farm” is the 1945 novella written by George Orwell, a satire of life in the Soviet Union under Joseph Stalin. Orwell had trouble getting his novel published in his homeland of the UK during WWII, as anti-Soviet literature wasn’t a good thing to publish while the UK and USSR were on the same side of a World War. In fact, one publisher who was willing to publish changed his mind after being warned off by the British Ministry of Information. I find it interesting that Orwell should write “Nineteen Eight-Four” a few years later, and introduce the world to Big Brother.

Down
1. Red cocktail, for short : COSMO
Like so many famous cocktails, the actual origins of the cosmopolitan are disputed. It is a nice drink though. One of the standard recipes is 4 parts citrus vodka, 1.5 parts Cointreau, 1.5 parts lime juice and 3 parts cranberry juice.

2. Played some dulcet tones : LUTED
The sweet tones of the lute …

6. Supermarket lines, for short : UPC
The person behind the counter at the store might scan the Universal Price Code. The first UPC marked item to get scanned at the front of store was on June 26, 1974, at 08:01 a.m. at Marsh’s supermarket in Troy, Ohio. It was a 10-pack of Wrigley’s Juicy Fruit chewing gum …

7. Loafer, e.g. : SLIP ON
The type of slip-on shoe called a “loafer” dates back to 1939, when it originally was a brand name introduced by the store Fortnum and Mason’s in London.

8. Five Norwegian kings : HARALDS
King Harald V is the current king of Norway, and has been on the throne since 1991 when his father passed away, King Olav V. You know how incestuous things are in the European Royal houses, so King Harald V of Norway is in the line of succession for the throne of England (albeit around no. 60).

11. Firewood measure : STERE
“Stere” is a metric measure, although it is not part of the modern metric system. Nowadays the stere is used as a measure for firewood, equal to one cubic meter.

12. Kind of wheel : WIRE-SPOKE
Wire-spoke wheels are ones in which the rims are connected to the hubs by wires held in tension. A good example is the bicycle wheel.

23. Engage in a bachelor party activity : BAR HOP
Back where I come from, bachelor parties are called stag parties, and bachelorette parties, are hen parties. And in Ireland the fairer sex usually isn’t welcome at a stag party, not even for entertainment purposes. We tend to focus on the drink …

25. Zen Buddhists, e.g. : SECT
Zen is one of the Buddhist schools, that became it’s own tradition in China back in the 7th century AD. Zen is a Japanese spelling of the Chinese word “chan”, which in turn derives from the Sanskrit word “dhyana” meaning “meditation”.

26. Hamilton and Hunt : LINDAS
Linda Hunt won her Oscar for playing a man, in Peter Weir’s 1982 masterpiece “The Year of Living Dangerously” set in Indonesia during the attempted coup of 1965. The film stars Mel Gibson and Sigourney Weaver, but it was Hunt that came away with the acting honors. If you’re a PBS listener, you will recognize Linda Hunt as the host of “City Arts & Lectures”, recorded in my neck of the woods by KQED public radio.

Linda Hamilton is best known for playing the toughest of the tough, Sarah Connor, in “The Terminator” movies. She is currently playing a role on television, as the title character’s mother in the fun spy-spoof show “Chuck”.

30. It’s just not normal : ABERRANCY
An “aberration” is a word that came into common usage from the world of natural history. The term derives from the Latin “aberrare” meaning “to wander out of the way”. An aberration in the natural world is a deviation from the norm, a word we use more conceptually these days.

36. British form of 33-Down : SNOOKER
33. See 36-Across : POOL
The more correct name for the game of pool is pocket billiards. The name “pool” came after pocket billiards started to be played in “pool halls”, places where gamblers “pooled” their money to bet on horse races.

42. Footnote word in Latin : PASSIM
“Passim” is the Latin word for “here and there”, and is used in a footnote to indicate that whatever word or phrase is being referred to occurs frequently in the work cited.

46. P.M. before Sharon : BARAK
Ehud Barak served as Prime Minister of Israel from 1999 to 2001. He left office after he called a special election for Prime Minister and lost the vote to Ariel Sharon. He resigned from the Knesset and left Israel, taking an advisory job with the US company Electronic Data Systems (EDS), and did some security related work with a private equity company. Barak tried to reenter Israeli politics in 2005 unsuccessfully, but in 2007 he took over leadership of the Labor Party, and is currently the country’s Minister of Defense.

48. Menace in the air, maybe : BOGEY
“Bogey” is WWII slang for an unidentified aircraft that is presumed to be hostile.

49. Moves along tirelessly? : SLEDS
Presumably “tirelessly” as one is sledding under the power of gravity, down a hill.

51. Middle management? : LIPO
Liposuction dates back to the 1920s, developed by a surgeon in France. However, the procedure quickly lost favor when a French model developed gangrene after surgery. As a result it wasn’t until the mid-seventies that the modern liposuction gained favor, after being popularized by two Italian-American surgeons in Rome.

55. Word accompanying “Much,” “Little” and “Late” in a 1978 #1 hit : TOO
“Too Much, Too Little, Too Late” was a hit duet released in 1978 by Johnny Mathis and Deniece Williams. It was a comeback song for Johnny Mathis to some extent, as it was his first chart topper in over two decades.