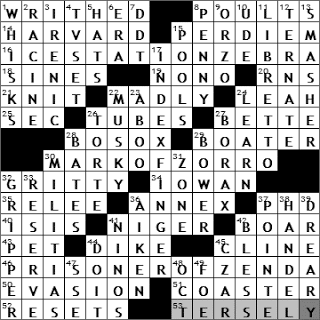 THEME: Z Movies … if there is a theme today, the three movie answers fit, all with “Z” words in the title i.e. ICE STATION ZEBRA, MARK OF ZORRO, PRISONER OF ZENDA
COMPLETION TIME: 54m 13s
ANSWERS I MISSED: 0

Across
8. Turkey tots? : POULTS
A poult is a young fowl, like a turkey, chicken or pheasant.

14. Lamont Library locale : HARVARD
The Harvard University Library is a system that includes 90 libraries in all. It started with just 400 books, all donated in 1638 by John Harvard. By 1764, it had grown to become the largest library in the country, but that year a fire destroyed almost every book in the collection. Today the library has recovered and is the fourth biggest in the country. Thomas Lamont was a Harvard graduate who made a fortune as a banker, and funded the construction of one of Harvard Library’s main buildings, now called the Lamont Library.

15. Like some expense reimbursements : PER DIEM
“Per diem” is the Latin for “by the day”.

16. 1968 Rock Hudson action film : ICE STATION ZEBRA
“Ice Station Zebra” is a fabulous action novel by Scottish author Alistair McLean, made into a pretty good film starring Patrick McGoohan and Rock Hudson released in 1968. The film features a lot of scenes shot inside and outside of submarines. One of the cameramen on the movie developed a new camera system that for the first time filmed a continuous dive of a submarine from under the water.

18. They can make waves : SINES
A sine wave is a mathematical function that describes a simple, smooth, repetitive oscillation. The sine wave is found right throughout the natural world. Ocean waves, light waves and sound waves all have a sine wave pattern.

24. “Dressing Rich” author Feldon : LEAH
Leah Feldon has been a style guru for over twenty years, appearing on television and in magazines, and authoring books on fashion. Her latest book sounds intriguing, titled “Does This Make Me Look Fat?”

27. “___ of Roses” (1995 adult contemporary album) : BETTE
I am a huge, huge fan of Bette Midler. I love everything about the woman, her bawdy humor, her expansive personality, and of course her amazing voice. Midler will forever be associated with the 1979 film “The Rose”, loosely based on the life of the self-destructive singer, Janis Joplin, with Bette Midler playing the leading role. Bette Midler shows she can act in this movie, and boy does she show that she can sing. The title song was written by Amanda McBroom and became a huge hit for Midler in 1979.

28. Green Monster’s squad : BOSOX
The left field wall in Fenway Park, home of the Boston Red Sox baseball team, is the tallest encountered in Major League ballparks. The wall was built so high to prevent viewing of games from outside of the park for free. The height also prevents home runs that would be possible in other ballparks, and so, given its color and reputation, it is called the Green Monster.

30. 1940 Tyrone Power adventure film, with “The” : MARK OF ZORRO
The 1940 movie “The Mark of Zorro” stands its own among a long line of “Zorro” films, largely due a great performance by Tyrone Power in the lead. For all you Batman fans out there, “The Mask of Zorro” was the movie that the Wayne family had just seen when Bruce Wayne’s parents were killed in front of him, launching his life of crime-fighting. Now that, that is trivia …

34. Dweller along the Skunk River : IOWAN
The Skunk River in Iowa is a tributary of the Mississippi. I guess it’s named after a skunk …

37. Many a prof : PH. D.
In many countries, including the US, the degree of Doctor of Philosophy (Ph. D.) is the highest academic degree awarded by universities. However, in Ireland and the UK, “doctorates” can also be awarded, a higher recognition. For example, there is a Doctor of Sciences (DSc) and a Doctor of Letters (DLitt).

40. “Aida” chorus subject : ISIS
“Aida” is the famous opera by Giuseppe Verde, actually based on a scenario written by a French Egyptologist Auguste Mariette, who also designed the costumes and stages for the opening performance. The opera was first performed in 1871 in an opera house in Cairo. In the storyline Aida is an Ethiopian princess brought into Egypt as a slave. Radames is an Egyptian commander that falls in love with her, and then of course, complications arise!

41. Where Hausa and Djerma are spoken : NIGER
The Republic of Niger is a landlocked country in Western Africa that gets its name from the Niger River. 80% of the country is taken up by part of the Sahara Desert.

42. Adonis’ undoing : BOAR
In Greek mythology Adonis is a beautiful, young god loved by Aphrodite. He dies in a hunting accident (gored by a boar), but not before he gives Aphrodite a child. Adonis was originally a Phoenician god (Phoenicia is modern day Lebanon) “absorbed” into Greek lore. The child born of Adonis to Aphrodite was called Beroe, after which is named Beirut, the capital city of Lebanon.

44. Big bank investment? : DIKE
A dike is an embankment usually made of earth and rock, used to prevent floods.

45. “She’s Got You” singer, 1962 : CLINE
Patsy Cline was a country music singer, who managed to cross over into the world of pop music where she enjoyed great success. Cline is one of a long list of musical legends who died in a plane crash. Cline was 30 years old when was killed in 1963, in a Piper Comanche plane piloted by her manager Randy Hughes. Hughes and Cline decided to make that last flight despite warnings of inclement weather, and it was a severe storm that brought down the plane in a forest outside Camden, Tennessee.

46. 1937 Ronald Colman adventure film, with “The” : PRISONER OF ZENDA
The 1937 film “The Prisoner of Zenda” is based on a novel of the same name written by Anthony Hope and first published in 1894. Apparently the movie was a difficult shoot for director John Cromwell. He had trouble with Ronald Colman who really didn’t known his lines well, and co-stars Douglas Fairbanks Jr. and David Niven were always out on the town and turning up for work “under the weather”.

51. Thing under a tumbler : COASTER
A “coaster”, a small mat or plate that goes under a glass or cup, was originally (back in the late 1800s) a small drink stand that sat on a table. As the drink stand “coasted” around from guest-to-guest, it earned the name “coaster”.

53. Without any gas? : TERSELY
Without any “gas”, that is without any idle or boastful talk, tersely.

Down
2. County south of Milwaukee : RACINE
The city of Racine was originally a trading post established by French explorers who arrived in the area in 1699. The settlement was located where the Root River empties in Lake Michigan. “Racine” is the French word for “root”.

7. It’s been banned in the U.S. since 1972 : DDT
DDT is DicholoroDiphenylTricholoroethane (don’t forget now!). It was used with great success to control disease-carrying insects during WWII, and when made available for use after the war it became by far the most popular pesticide. And then Rachel Carson published her famous book “Silent Spring”, suggesting there was a link between DDT and diminishing populations of certain wildlife. It was the public outcry sparked by the book and reports of links between DDT and cancer, that led to the ban on the use of DDT in 1972. That ban is touted as the main reason that the bald eagle was rescued from near extinction.

8. Wise leader? : PENNY
According to the idiom, one can be “penny-wise and pound-foolish”. One might watch the pennies, and ignore the pounds (English money) being spent. That’s foolish …

9. Italian side dish : ORZO
Orzo is pasta that has been formed into granular shapes, much like barley. And indeed, “orzo” is the Italian word for “barley”.

10. Ulan-___, Russia : UDE
Ulan-ude is a city founded by the Russian Cossacks. If you ever get to visit, you’ll be able to see a huge sculpture of the head of Vladimir Lenin, the largest head of Lenin ever built.

11. Book : LIBRETTO
A libretto can be the book that contains the text of a dramatic musical work, with the text also being called a libretto.

12. Like a clover leaf : TERNATE
Something “ternate” is arranged in groups of three, like clover or my personal favorite, shamrock …

15. Crawl spaces? : POOLS
Clever clue … one might swim the crawl in a pool.

22. Like some perfume : MUSKY
Musk has such an elegant connotation these days because of it’s use in the world of perfumery. However, its origin is not quite so glamorous. The original substance called musk, used in perfumes, was extracted from a gland in the rectal area of the male musk deer. The name “musk” is a Sanskrit word for “testicle”.

26. Calorie-rich dessert : TORTE
A torte is a type of cake made primarily with eggs, sugar and ground nuts (but no flour).

27. Ingredient in artificial gems : BORAX
Borax is used as a raw material in the production of artificial gems. Borax is often chosen because it naturally contains impurities that can color the glass of the gem, appropriate to what color is required.

28. Katharine Lee ___, writer of “America the Beautiful” : BATES
When she was 33 years old, Katharine Lee Bates took a train ride from Massachusetts to Colorado Springs. She was so inspired by many of the beautiful sights she saw on her journey that she wrote a poem she called “Pikes Peak”. Upon publication the poem became quite a hit, and several musical works were adapted to the poem’s words, the most popular being a hymn tune composed by Samuel Ward. Bates’s poem and Ward’s tune were published together for the first time in 1910, and given the title “America the Beautiful”.

29. Garden shelter : BOWER
Our word “bower” comes from the Old English “bur” meaning a hut or dwelling. We’ve been using it to mean a “leafy arbor”, a “dwelling” closed in by trees, since way back in the 1500s.

30. Revolutionary War groups : MILITIAS
“Militia” is a Latin word meaning either “military service” or “warfare”. We’ve been using it in the US to describe a body of men who are willing to serve as a military force, although they aren’t actually enlisted.

36. Conrad who wrote “Ushant,” 1952 : AIKEN
“Ushant” is an autobiographical novel written by Conrad Aiken, first published in 1952. Aiken won many awards during his life, and was the first Georgia-born author to win a Pulitzer, in 1930.

37. ___ shoes (ballet wear) : POINTE
“Pointe” is the name given to ballet dancing on the tips of the toes, and is a French term. A ballerina wears “pointe shoes” to perform this delightful, albeit unhealthy, feat … pun intended …

38. “Ezio” composer : HANDEL
“Ezio” is an opera by George Frideric Handel, first performed in 1732 in London.

George Frideric Handel was the King of the Oratorio. His most famous oratorio, “Messiah” was actually performed first in Dublin, Ireland, back in 1742.