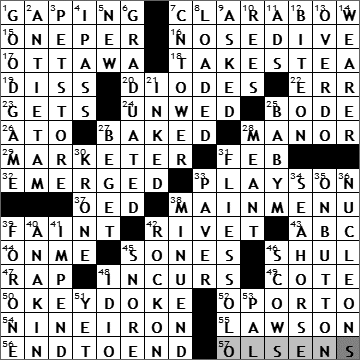 7. Early film star who wore lipstick in the shape of a heart : CLARA BOW
Clara Bow was a fabulous star of silent film, with her most famous movie being “It” from 1927. Clara Bow’s performance was so celebrated in the movie that she was forever to be known as the “It girl”. The term “it” was a euphemism for “sex appeal”, and that is what Clara Bow was known to “exude”. Bow applied her red lipstick in the shape of a heart, and women who copied this style were said to put on a “Clara Bow”.

18. Has a service break? : TAKES TEA
To take tea is to have a snack or meal built around the beverage, tea, and it might be served on a tea service.

19. Reqmt. for giving someone the third degree? : DISS
Someone looking for that third academic degree, almost invariably has to present/defend a dissertation.

20. Some compact light sources : DIODES
A Light Emitting Diode (LED) is a specialized form of semiconductor that when switched on releases photons (light). LEDs are getting more and more popular and have moved from use in electronic equipment to use as a replacement for the much less efficient tungsten bulb. I replaced many of my tungsten Xmas lights last year and saved a lot on my electricity bill. I am definitely replacing the rest this coming Christmas.

28. ___ Farm, setting for a George Orwell story : MANOR
“Animal Farm” is the 1945 novella written by George Orwell, a satire of life in the Soviet Union under Joseph Stalin. Orwell had trouble getting his novel published in his homeland of the UK during WWII as anti-Soviet literature wasn’t a good thing to publish while the UK and USSR were on the same side of a World War. In fact, one publisher who was willing to publish changed his mind after being warned off by the British Ministry of Information. I find it interesting that Orwell should write “Nineteen Eight-Four” a few years later, and introduce the world to Big Brother.

The name of the farm in the story is Manor Farm.

37. Its first two vols. covered 43-Across : OED
43. See 37-Across : ABC
The “Oxford English Dictionary” contains over 300,000 “main” entries, and 59 million words in total. It is said it would take a single person 120 years to type it out in full. The longest word in the OED for the second edition was the verb “set”. When the third edition was published in 2007, the longest entry for a single word became the verb “put”.

45. Measures of volume : SONES
In the acoustic world, the sone was introduced as a unit of perceived loudness in 1936.

46. House of prayer : SHUL
Shul is an another word for a synagogue.

47. Spirited response? : RAP
At a seance, a spirit might respond with a rap on the table. Scary …

49. Farm shelter : COTE
The Old English word “cote” was used for a small house. Our modern word “cottage” comes from “cote”, as does “cote”, the word for a small shelter on a farm for sheep or birds.

52. Iberian city that lends its name to a variety of wine : OPORTO
Oporto is Portugal’s second largest city, after the capital of Lisbon. The Latin name for the city is Portus Cale, Port of Cale. The name “Portucale” evolved into “Portugale” which eventually gave the name to the whole country, Portugal. Oporto gave its name to port wine in the late 1600s, as it was the seaport through which most of the fortified wine was exported.

54. It’s not useful in a long shot situation : NINE IRON
The 9 iron is the “shortest” of the regular irons, meaning it lofts the ball the highest, and achieves the least distance.

55. Food writer Nigella : LAWSON
Nigella Lawson’s rather inventive name comes from her father, Nigel Lawson. Dad was Chancellor of the Exchequer (equivalent to Treasury Secretary in the US) in Margaret Thatcher’s cabinet in the eighties.

57. Noted TV twins : OLSENS
I don’t know anything about the Olsen twins, but I am told that folks believe Mary-Kate and Ashley to be identical twins. They look very much alike, but are in fact just fraternal twins.

Down
2. Maryland’s historic ___ Creek : ANTIETAM
The first major battle to take place on northern soil during the Civil War was at Antietam Creek in Maryland. It was also the most bloody 1-day battle in American history, with about 23,000 casualties.

7. Toronto landmark : CN TOWER
When I last took the elevator to the top of the CN Tower back in the eighties, it was the tallest, free-standing structure in the world. It lost that title in 2007 during the construction of the Burj Khalifa in Dubai, the building which still has that honor. The CN Tower was built by the railway company Canadian National, which gave it the name. Since Canadian National sold the tower in 1995, it has been known as Canada’s National Tower, although I don’t think many people worry about what the CN stands for!

11. Things that pop up annoyingly : ADS
Although I do have to run ads on the NYTimes Crossword site to cover costs, I promise I won’t resort to pop ups!

25. Subject of a 1980s surrogacy case : BABY M
Baby M was born to surrogate mother, Mary Beth Whitehead, in 1986. Within 24 hours of handing over the baby to William Stern (the genetic father) and his wife, Whitehead took the baby back and sparked a legal battle over custody. The case was decided in favor of the married couple and genetic father, with the surrogate mother being granted visitation rights. Baby M’s real name was Melissa Stern, and when she turned 18 she made the choice to terminate her relationship with her biological mother.

33. Worker with street smarts? : PAVER
Back in Ireland, the “pavement” is what we call the “footpath” (because the footpath is “paved”!). It’s very confusing when you arrive in this country from Ireland, and a little dangerous, as one has been taught to “walk on the pavement” since one was a toddler …

36. Bundles of bound quarks : NUCLEONS
The three nuclear particles that we all learned about at school were protons, electrons and neutrons. The “big” particles, the protons and neutrons are known collectively as nucleons. Nucleons aren’t fundamental particles, in the sense that nucleons are made up of three smaller particles called quarks. Protons are made from two “up” quarks and one “down” quark, while neutrons are composed of one “up” quark and two “down” quarks.

38. Something from which something else is taken away : MINUEND
In the subtraction (as an example) 9-5 = 4, 9 is the minuend, and 5 is the subtrahend.

40. “Star Wars” name : ANAKIN
Anakin Skywalker is actually the principal character in all six of the “Star Wars” movies. His progress chronologically through the series of films is:

– Episode I: Anakin is a 9-year-old slave boy who earns the promise of Jedi training by young Obi-Wan Kenobi.
– Episode II: Anakin is 18-years-old and goes on a murdering rampage to avenge the murder of his mother.
– Episode III: Anakin is 21-years-old is now a Jedi knight, but turns to the Dark Side and becomes Darth Vader. His wife, Padme gives birth to twins, Luke and Leia Skywalker.

-Episode IV: Anakin, as Darth Vader comes into conflict with his children, Luke Skywalker and the Princess Leia.
– Episode V: Darth Vader attempts to coax his son, Luke, over to the dark side, and reveals to Luke that he is his father.
– Episode VI: Luke learns that Leia is his sister, and takes on the task of bringing Darth Vader back from the Dark Side in order to save the Galaxy. Vader saves his son from the Emperor’s evil grip, and in the process dies, but his spirit ends up alongside the spirits of Yoda and Obi-Wan. And they all live happily ever after …

46. Junk vehicles : SCOWS
A scow is that flat-bottomed boat with squared off ends that’s often used for transportation, usually pushed or pulled by a barge. It might carry junk.