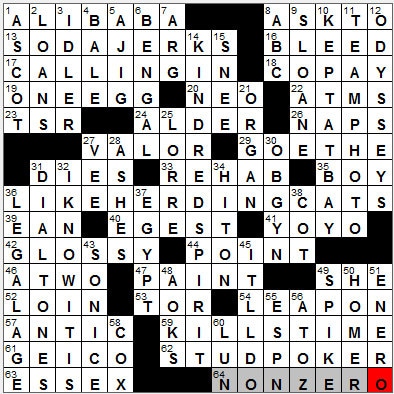 
Today’s Wiki-est, Amazonian Googlies
1. One with a famous opening act? : ALI BABA
There is some controversy about the story “Ali Baba and the Forty Thieves” in that it has been suggested it was not part of the original collection of Arabic tales called “One Thousand and One Nights”. The suggestion is that the Ali Baba tale was added by one of its European translators.

13. They get the scoop at work : SODA JERKS
In the halcyon days of yore, a “soda jerk” was usually a young person whose main job was to serve ice cream sodas in a drugstore. The server would “jerk” the handle on the soda fountain to dispense the soda water, giving the job its distinctive name.

23. Old game co. that made D&D : TSR
Dungeons & Dragons is a complex role-playing game first published in 1974, by Tactical Studies Rules Incorporated (TSR). It was probably the first of the modern role-playing games to be developed, and the most successful. It is still played by lots of people today, including my nerdy son …

24. Tree with catkins : ALDER
Alder trees are deciduous (i.e. not evergreen), and the fruit of the tree is called a “catkin”. The tree carries both male and female catkins that look very similar to each other, but the male catkin is longer than the female. Alders are pollinated by wind usually, although bees can play a role.

29. “The Sorrows of Young Werther” author : GOETHE
Johann Wolfgang von Goethe was a German writer (among other things!). His most famous work is probably his play “Faust”. This epic work was published in parts, starting in 1808. The work was only published in toto after his death in 1832.

“The Sorrows of Young Werther” is a novel by Johann Wolfgang von Geothe, first published in 1774. The piece is described as being loosely autobiographical, and it brought fame and success to Goethe as a writer, within his own lifetime.

39. Suffix with Caesar : -EAN
The story that Julius Caesar was born via a Caesarean section seems be unfounded. Although such procedures were indeed carried out in Ancient Rome there are no reports of the mother surviving (and Julius Caesar’s mother did raise her child).

41. Swing wildly : YO-YO
Would you believe that the first yo-yos date back to 500 BC? There is even an ancient Greek vase painting that shows a young man playing with a yo-yo. Centuries later Filipinos were using yo-yos as hunting tools in the 1500s. “Yo-yo” is a Tagalog (Filipino) word meaning “come-come” or simply “return”.

46. Part of the intro to a piece of “Champagne Music” : A-TWO
The style of music with which bandleader Lawrence Welk was associated became known as “champagne music”. The term was coined by a dancer in the William Penn Hotel in Pittsburgh when Welk was appearing there with his band in the thirties.

Lawrence Welk used to count into his performances with “A-one an’ a-two …”. He even had a licence plate “A1ANA2”.

52. Allocation of some pork spending? : LOIN
Pork loin is the tissue along the top of the ribs.

53. A.L. East squad, on scoreboards : TOR
The Toronto Blue Jays, founded in 1977, is the only baseball team outside the US to win a World Series, doing so in 1992 and 1993. And since the Montreal Expos relocated to Washington, the Blue Jays are the only Major League Baseball team headquartered outside of the US.

61. Advertiser with a computer-generated mascot : GEICO
GEICO was founded in 1936 with a very specific mission, to provide auto insurance for employees of the federal government and their families. Hence the name, Government Employees Insurance Company (GEICO). It is a private company, despite the word “government” in its name. The founders’ idea was focus on government employees as they believed such a group represented a lower risk profile than the rest of the population. Nowadays anyone can go with GEICO, which is 100% owned by Berkshire Hathaway, Warren Buffet’s investment firm.

62. Game that gave rise to the expression “ace in the hole” : STUD POKER
Stud poker is the name given to many variants of the game, all characterized by the dealer giving each player a mix of cards face-down and face-up. The cards facing downwards are called “hole cards”, cards only visible to the individual who holds that particular hand. That gives rise to the phrase “ace in the hole”, a valuable holding that only the player with the ace is aware of.

63. Thomas Cromwell’s earldom : ESSEX
Thomas Cromwell was the 1st Earl of Essex, and a trusted advisor of King Henry VIII of England. Cromwell very much drove the English Reformation, the break with the Catholic Church in Rome. He was also the man who arranged for the annulment of Henry’s first marriage so that the king could marry Anne Boleyn. But, like so many of those close to Henry VIII, Cromwell fell out of favor and was executed. Cromwell’s “crime” was that he arranged Henry’s fourth marriage, to Anne of Cleves, and this turned out to be a terrible match.

Down
1. Fred has one in “Scooby-Doo” cartoons : ASCOT
An Ascot tie is that horrible looking (I think!) wide tie that narrows at the neck, which these days is only really worn at weddings. The tie takes its name from the Royal Ascot horse race, at which punters still turn up in formal wear at Ascot Racecourse in England.

6. Player losing to the 49ers in Super Bowl XVI or XXIII : BENGAL
The NFL’s Cincinnati Bengals team was founded in 1966 as a member of the American Football League (AFL). There was an earlier team called the Bengals in the city, which played from 1937 to 1941. The team used the “Bengal” name because Cincinnati Zoo was home to a very rare Bengal tiger.

7. Intl. soccer powerhouse : ARG
Argentina’s national soccer team has won the FIFA World Cup twice, in 1978 and 1986. Argentina and Brazil are the only South American teams to have won the World Cup when the tournament was played outside their continent.

15. N.F.L. All-Pro player Chris : SNEE
Chris Snee is a football player for the New York Giants. Snee is married to the daughter of Tom Coughlin, the Giants coach.

21. What a fugue may be written for : ORGAN
A fugue is similar to a round in that it is a piece written for two or more voices, with themes that are introduced and taken up by different voices at different pitches. The most famous composer of fugues has to be Bach.

25. “Passage to Marseille” actor, 1944 : LORRE
The marvelous actor Peter Lorre was born in what is now modern-day Slovakia. His real name was Laszlo Lowenstein. He started acting in Vienna when he was quite young, only 17 years old. When Hitler came to power, the Jewish Lowenstein headed to Paris and then London, eventually ending up in Hollywood. He found himself typecast as the wicked foreigner in American movies, but I think he sneered and snarled his way to the bank.

“Passage to Marseille” is a war film that was released in 1944. It is noted as the movie that reunited many actors from the cast of 1942’s “Casablanca”, including Humphrey Bogart, Claude Rains, Sydney Greenstreet and Peter Lorre. The female lead is played by Michèle Morgan, a French actress who was the original choice for the lead in “Casablanca”, but her studio would not release her for the 1942 film so Ingred Bergman got the job.

50. “Breezing Up (A Fair Wind)” artist, 1876 : HOMER
Winslow Homer was an American landscape painter and illustrator active in the second half of the 19th century. His most famous work is probably the oil painting depicting a man and three boys sailing, which bears the title “Breezing Up (A Fair Wind)”, and which can be seen in the National Gallery of Art in Washington, D. C.

51. When to celebrate el Día de los Reyes : ENERO
In Spanish, a year (año) starts in January (Enero) and ends in December (Diciembre).

55. “Outside the Lines” airer : ESPN
ESPN is the Entertainment Sports Programming Network, a cable network that broadcasts sports programming 24 hours a day. It was launched back in 1979.

58. Boat navigator, informally : COX
The coxswain of a boat is one in charge, particularly of its steering and navigation. The name is shortened to “cox” particularly when used for the person steering and calling out the stroke in a competition rowing boat.

60. “___ Yu” (collection also known as “The Analects of Confucius”) : LUN
“The Analects” or “Linyu” is a collection of the sayings of the Chinese philosopher Confucius. It wasn’t Confucius who wrote down his thoughts though, but rather his pupils, some 40 or so years after his death in 479 BC.