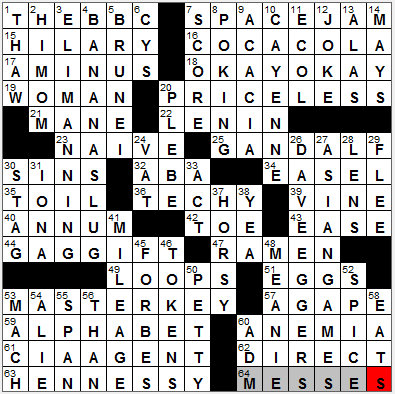 
Today’s Wiki-est, Amazonian Googlies
1. It operates under a royal charter : THE BBC
The British Broadcasting Corporation (BBC) is also known as “the Beeb”, a name given to the network by the great Peter Sellers on the classic British radio comedy called “The Goon Show”. The BBC was founded in 1922, and was the world’s first national broadcasting organization.

15. Swank in Hollywood : HILARY
The actress Hilary Swank had her first major role in “The Next Karate Kid” released in 1994, in which she played the first female student of the sensei, Mr. Myagi.

16. Popular mixer : COCA-COLA
The first cola drink to become a commercial success was Coca-Cola, soon after it was invented by a druggist in 1886. It was flavored mainly with kola nuts and vanilla. The formulation was based on an alcoholic drink called Coca Wine that had been on sale for over twenty years. That original alcoholic version actually contained a small concentration of cocaine.

19. Many a first-time voter in 1920 : WOMAN
Women’s suffrage finally came about in the US with the ratification of the Nineteenth Amendment to the constitution in 1920. Some women were allowed to vote prior to 1920 depending on location. For example, women could vote in New Jersey from 1790, until 1807 when the right was taken away.

22. “Imperialism, the Highest Stage of Capitalism” writer : LENIN
I made it to Russia only once in my life, and it was a memorable trip. I saw all the sites in and around Red Square in Moscow, but couldn’t get in to visit Lenin’s Tomb. It was closed for renovations …

25. Balrog slayer, in fiction : GANDALF
Gandalf is an important character in the J. R. R. Tolkien novels “The Hobbit” and “The Lord of the Rings” trilogy. He is a wizard known as Gandalf the Grey during his lifetime, and as Gandalf the White after he returns from the dead.

Balrogs are demons that feature in Tolkien’s “Lord of the Rings” trilogy.

32. Case worker’s org.? : ABA
The American Bar Association (ABA) was founded back in 1878 and is a voluntary association for lawyers and law students. The ABA focuses on setting academic standards for law schools and setting ethical codes for the profession.

39. Kudzu, e.g. : VINE
Kudzu is a climbing vine that is native to southern Japan and southeast China. “Kudzu” is derived from the Japanese name for the plant, “kuzu”. Kudzu is a vigorously growing weed that chokes other plants by climbing all over them and shielding them from light. Kudzu was brought to the US from Asia for the Japanese pavilion in the 1876 Centennial Exposition in Philadelphia. It was marketed as an ornamental, especially in the southeast of the country, and now is all over the region. Kudzu earned itself the nickname “the vine that ate the South”.

47. Dish often served with soy sauce or miso : RAMEN
Ramen is a noodle dish composed of Chinese-style wheat noodles in a meat or fish broth flavored with soy or miso sauce. It is usually topped with sliced pork and dried seaweed.

Miso is the name of the seasoning that makes the soup. Basic miso seasoning is made by fermenting rice, barley and soybeans with salt and a fungus (!), to produce a paste. The paste can be added to stock to make miso soup, or perhaps to flavor tofu.

60. Lack of vitality : ANEMIA
Anemia (or “anaemia” as we write it back in Ireland) is from a Greek word meaning “lack of blood”. It is actually a lack of iron in the blood, or a low red blood cell count. Tiredness is a symptom of the condition.

61. Many a role in the Jason Bourne films : CIA AGENT
Jason Bourne is a character in the marvelous series of thriller novels by Robert Ludlum. Three of the books have been made into movies starring Matt Damon in the title role, and word is that another one might be in the works. Ludlum wrote only the first three books in the series and five more were written, using his character and style, by Eric Van Lustbader.

63. Brandy brand : HENNESSY
Hennessy is a distillery in the Cognac region of France. As one might expect from the name, Hennessy was founded by an Irishman, Richard Hennessy. He established the company in 1765, and one of his descendants runs the business today.

Down
3. M.V.P. of Super Bowls XLII and XLVI : ELI MANNING
Even I know that Eli Manning and his older brother Peyton are both quarterbacks!

4. U.C. Santa Cruz athlete : BANANA SLUG
The original mascot for the sports teams of UC Santa Cruz was the sea lion. The students apparently didn’t like this choice and changed the mascot to the banana slug after a campus referendum in 1986.

5. It borders the South China Sea : BRUNEI
The official name of Brunei is the Nation of Brunei, the Abode of Peace. Brunei is situated in the island of Borneo, almost completely surrounded by Malaysia. Brunei’s government is dictated by the constitution adopted in 1959, and is ruled by a sultan with full executive authority.

6. Young and others : CYS
Cy Young was a pitcher in the major leagues from 1890-1911. Young is remembered for pitching the first perfect game of baseball’s modern era. Soon after he died in 1955, the Cy Young Award was created and is presented to the best pitcher in each baseball season.

8. Contacting via Facebook, in a way : POKING
When you “poke” someone on Facebook, an icon shows up on the poked person’s Facebook page telling them they have been “poked” and by whom. I guess it’s a way of saying “hi”, but I am very much a Facebook neophyte.

9. Whistling thorn, e.g. : ACACIA
Acacia is a genus of tree and shrub, also known as thorntree, whistling thorn and wattle.

10. Ingredient in Buffalo wings : CAYENNE
There are a few stories about how Buffalo wings were first developed, most of them related to the Anchor Bar in Buffalo, New York. If you’re looking for Buffalo wings on a menu in Buffalo, you’ll note that in and around the city they’re just referred to as “wings”.

14. Billy famous for infomercials : MAYS
Billy Mays was a larger than life salesman often seen in infomercials. His loud and aggressive pitch was remarkably successful, although it did nothing for me …

20. Rite of passage participant, often : PLEBE
Plebe is a slang term for a freshman in the US military and naval academies. Plebe is probably short for “plebeian”, the name given to someone of the common class in ancient Rome (as opposed to a Patrician). “Pleb” is a shortened version of plebeian, and is a term used outside of the military schools.

29. Fugitate : FLEE
The term “fugitate” comes from Scottish law, where it originally meant to be legally declared a fugitive from justice.

45. Big list maker : FORBES
The Forbes 400 is a list published annually by “Forbes Magazine”, a list of the 400 Americans with the largest net worth. Top of the list for the 17 years up to 2010 was Bill Gates. In the year 2000, the 400 wealthiest people controlled 12.2% of the country’s Gross Domestic Product. That’s 12.2% … I wonder what Thomas Jefferson would have thought of that …

50. Inconsequential : PETTY
The word “petty”, meaning “small-minded”, comes from the French word for small, “petit”. When “petty” first came into English it wasn’t used disparagingly, and was used more literally giving us terms like “petty officer” and “petty cash”.

53. Physicist Ernst who studied shock waves : MACH
The Mach number of a moving object (like say an airplane) is it’s speed relative to the speed of sound. A plane travelling at Mach 2, for example, is moving at twice the speed of sound. The term “Mach” takes its name from the Austrian physicist Ernst Mach who published a groundbreaking paper in 1877 that even predicted the “sonic boom”.

58. Chow : EATS
“Chow” is an American slang term for food that originated in California in the mid-1800s. “Chow” comes from Chinese pidgin English “chow-chow”, meaning “food”.

60. Nelson, e.g.: Abbr. : ADM
Admiral Horatio Nelson’s flagship at the Battle of Trafalgar was HMS Victory. The battle was a decisive win for the British during the Napoleonic Wars, fought against the combined fleets of France and Spain. Nelson was fatally wounded by a marksman from one of the French ships but as he was conscious he continued to monitor the battle, dying three hours after he was shot. Nelson was much revered by his crew, who felt that his body had to be returned to England. The body was placed in a barrel full of brandy, and the barrel lashed to the mainmast of the Victory and placed under guard. The damaged flagship was towed to Gibraltar where the the body was transferred to a lead-lined coffin, and the brandy replaced by aqua vitae, spirits of wine. While the body continued its journey home, dispatches reporting the outcome of the battle were carried to England on a ship called … HMS Pickle!