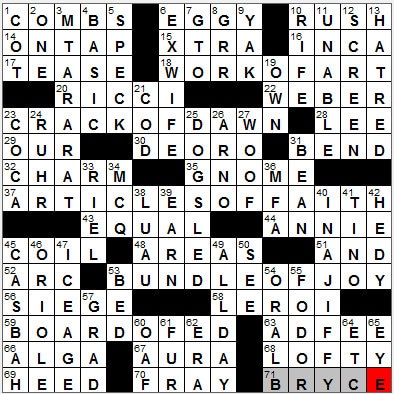 CROSSWORD SETTER: Joe DiPietro
THEME: Something of Someone … each of the theme answers is a common term in the format “something of something”. The last word in each term can also be interpreted as someone’s given name, and that’s how each themed clue reads:


Today’s Wiki-est, Amazonian Googlies
1. Barbers’ aids : COMBS
Our word “barber” comes to us from Latin via French. “Barba” is the Latin for “beard”.

16. Pizarro foe : INCA
Spanish conquistador Francisco Pizarro discovered the Incas in 1526, marking the beginning of the end for the ancient civilization, ravaged by the brutal Spanish colonists and by imported smallpox. The last leader of the Incas was Atahualpa. Pizarro staged a mock trial and then condemned Atahualpa to execution by burning. A Spanish friar intervened on behalf of the condemned man, as Atahualpa believed that if he was burned his soul would not move on to the afterlife. Pizarro, was kind enough to have Atahualpa garroted instead.

20. Christina of “Sleepy Hollow” : RICCI
Christina Ricci is an American actress who found fame on the big screen at an early age, playing the very young Wednesday Addams in the 1991 movie version of “The Addams Family”.

“Sleepy Hollow” is a Tim Burton film released in 1999. It is of course a screen adaptation of the short story “The Legend of Sleepy Hollow” by Washington Irving. Stars of the film are Johnny Depp and Christina Ricci.

22. Barbecue grill brand : WEBER
In 1952 George Stephen was working for the Weber Brothers Metal works in Chicago. One of the company’s products was a line of half-spheres that were welded together to make buoys used in Lake Michigan. Stephens took two of these metal hemispheres and converted them into the original kettle grill. The Weber company set up a barbecue division that Stephens ran, and Stephen became so successful that he bought out the Weber Brothers factory and converted all production to the manufacture of grills.

28. Wrangler rival : LEE
The Lee company famous for making jeans was formed in 1889, by one Henry David Lee in Salina, Kansas.

Wrangler is a manufacturer of jeans headquartered in Greensboro, North Carolina. Wrangler jeans were first made in the mid-1940s and were designed specifically for use by cowboys in rodeos.

29. “___ Miss Brooks” : OUR
“Our Miss Brooks” is a sitcom starring Eve Arden as a high school English teacher. “Our Miss Brooks” was originally a radio show, and it was moved to television in the fifties. There was even a movie of the same name that was released in 1956. Of course years later, Eve Arden was to get a “promotion” and play the high school principal in the film version of the musical “Grease”.

35. Garden decoration : GNOME
In English folklore, the lovable fairy’s anti-hero is the diminutive gnome, an evil ugly character. Over the centuries, the gnome has become more lovable so we now have garden gnomes and even the Travelocity Gnome …

NutraSweet is a brand name for the artificial sweetener aspartame. Aspartame was discovered by a chemist working for Searle in 1965, but it took 15 years for the company to be granted approval for its sale. I wonder why …???

44. “___ Hall” : ANNIE
I suppose if there is any Woody Allen movie that I enjoy watching, it’s “Annie Hall” from 1977. I think Diane Keaton is a great actress and she is wonderful in this film. You’ll see Paul Simon as well making a rare movie appearance, and even Truman Capote playing himself. The film is also famous for sparking a movement in the fashion world to adopt the “Annie Hall” look, that very distinctive appearance championed by Diane Keaton as the Annie Hall character.

66. Sea lettuce, e.g. : ALGA
Sea lettuce is a group of algae that grows in coastal areas of the world’s oceans. Many species of sea lettuce are edible by humans, and it can be found raw in salads and cooked in soups.

67. Something many a celebrity carries in public : AURA
An aura (plural: aurae) is an intangible quality that surrounds a person or thing, a “je ne sais quoi”. “Je ne sais quoi” is French for “I don’t know”.

71. Utah’s ___ Canyon : BRYCE
Bryce Canyon National Park is truly a beautiful part of the America. The strange thing is that Bryce isn’t a canyon at all, but rather is a natural amphitheater created by erosion of sedimentary rocks that are part of the Paunsaugunt Plateau.

Down
3. Highest peak in Turk. : MT ARARAT
Mount Ararat is in Turkey. Ararat is a snow-capped, dormant volcano with two peaks. The higher of the two, Greater Ararat, is the tallest peak in the country. Ararat takes its name from a legendary Armenian hero called Ara the Beautiful (or Ara the Handsome).

21. Fish salted for bacalao : COD
In the British Isles, the most common fish that is used in traditional “fish and chips” is Atlantic cod. Cod has been overfished all over the world, and is now considered to be an endangered species by many international bodies.

“Bacalao” is the Spanish term for dried and salted cod and the dishes that are made from it.

23. Andean stimulant : COCA
The coca plant is native to South America, and is similar in appearance to a blackthorn bush. Coca leaves have been chewed by humans for centuries, perhaps even as far back as 3,000 years ago. Chewing the leaves apparently produces a pleasurable numb sensation in the mouth and a pleasant taste. The most famous alkaloid in the leaf is cocaine, but this wasn’t extracted in its pure form until the mid-1800s. The extracted cocaine was used in a medicines and tonics and other beverages, including the original version of Coca-Cola! Before 1903, a glass of Coke would contain about 9mg of cocaine. Coca-Cola still uses coca leaves, as the flavor is prized, but the cocaine is extracted before it arrives at the bottling plant.

24. River to the Rhine : RUHR
The Ruhr is a medium-sized river in Germany that flows from east to west, ultimately emptying into the Rhine.

25. Iditarod transport : DOGSLED
The Iditarod Trail Sled Dog Race coves a massive 1,161 miles, and starts every year on the first Saturday in March. The first race was held in 1973, and the fastest finishing time was set in 2002 at just under 9 days. The first few races only used a northern route, but then a southern route was added to the roster every second year. It’s kind of a good thing, because when the racers take the northern route they don’t even pass through the town of Iditarod!

26. River near the Leaning Tower : ARNO
The Arno is the principal river in the Tuscany region of Italy, passing through the cities of Florence and Pisa. Famously the Arno flooded in 1966, the worst flood in the region for centuries. There were numerous deaths and extensive destruction of priceless art treasures, particularly in Florence.

Pisa is right on the Italian coast, sitting at the mouth of the River Arno, and is famous for its Leaning Tower. The tower is actually the campanile (bell tower) of the city’s cathedral, and it has been leaning since it was completed in 1173. It just shows you how important good foundations are …

33. Cambodian money : RIEL
The Cambodian riel was first introduced in 1953, and was taken out of circulation by the Khmer Rouge in 1975 when they completely abolished money on taking control of the country. After the Vietnamese invasion of 1978, money was reintroduced and the Cambodian people are still using the “second” riel.

34. 1974 John Wayne film : MCQ
“McQ” is a 1974 crime thriller set in Seattle, Washington. The movie was somewhat of a consolation prize for the star, John Wayne, as a few years earlier he was passed over for the title role in “Dirty Harry”. That role of course went to Clint Eastwood.

John Wayne’s real name was Marion Mitchell Morrison, and he was named after his grandfather, a Civil War veteran. When he was a little boy, a local fireman used to call him “Little Duke” because he was always seen walking with his large dog called “Duke”. Young Mr. Morrison preferred the name “Duke” to “Marion” and so he adopted it, and it stuck with him.

38. Bash on a beach : LUAU
Nowadays the word “luau” denotes almost any kind of party on the Hawaiian Islands, but to the purist a luau is a feast that always includes a serving of “poi”, the bulbous underground stems of taro baked with coconut milk.

40. Right away : IN A JIFFY
“Jiffy”, meaning an “instant”, was originally slang used by thieves to mean “lightning”.

41. One of the Flying Wallendas : TINO
The Flying Wallendas is a circus act, noted for highwire routines that are performed without a net. The original Wallenda troupe was from Germany, and first performed in the US in Madison Square Garden in 1928. The safety net that was used by the act was lost in transit, and so the Wallendas made their first American performance without a net to the delight of the crowd. Working without a net then became the act’s trademark. Despite many tragic incidents that have resulted in deaths, Wallenda family members are performing to this day.

42. Actress Lamarr : HEDY
Hedy Lamarr was an American actress, originally from Vienna in modern-day Austria. Not only was Lamarr a successful Hollywood performer, during WWII she was the co-inventor of the frequency-hopping spread-spectrum technique that is still used to this day in wireless communication. Impressive …

46. American Leaguer since 1954 : ORIOLE
The Baltimore Orioles was one of the eight charter teams of MLB’s American League, so the franchise dates back to 1901. Prior to 1901, the team has roots in the Minor League Milwaukee Brewers, and indeed entered the American League using the Brewers name. In 1902 the Brewers moved to St. Louis and became the Browns. The team didn’t fare well in St. Louis, so when it finally relocated to Baltimore in the early fifties the team changed its name completely, to the Baltimore Orioles. The owners so badly wanted a fresh start that they traded 17 old Browns players with the New York Yankees. The trade didn’t help the team’s performance on the field in those early days, but it did help distance the new team from its past.

47. When mastodons became extinct : ICE AGE
Mastodons were large tusked elephant-like mammals that inhabited much of the world prior to the last Ice Age.

54. Floss brand : ORAL-B
The Oral-B toothbrush was introduced to the world in 1950, designed by a California periodontist. The first “model” was the Oral-B 60, a name given to reflect the 60 tufts in the brush. And in 1969, the Oral-B was the first toothbrush to get to the moon, traveling on the Apollo 11 spacecraft.

55. Big name in travel guides : FODOR
Fodor’s is the world’s largest publisher of English-language travel and tourist guides. The guidebooks were introduced in 1936 by Eugene Fodor, an American-Hungarian who was a keen traveller.

57. Sheepskin holder : GRAD
In ancient times, diplomas issued by educational institutions were made of thin sheepskin, as paper wasn’t an economically viable material back then.