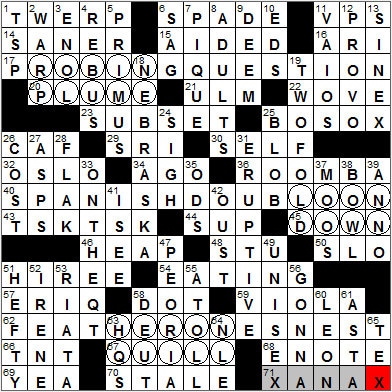 CROSSWORD SETTER: Todd McClary
THEME: FEATHER ONE’S NEST … the circled letters in the grid form pairs of words, the first being a bird and the second a word meaning “feather”:


Today’s Wiki-est, Amazonian Googlies
1. Insignificant one : TWERP
“Twerp” and “pipsqueak” are both terms used for someone who is insignificant and contemptible.

21. Einstein’s birthplace : ULM
Ulm is in the south of Germany and sits on the River Danube. Ulm is famous as home to the tallest church in the world, Ulm Minster, a Gothic building with a steeple that is 530ft tall, with 768 steps to climb. Ulm is also the birthplace of Albert Einstein, and is where the entire Austrian army surrendered to Napoleon after the Battle of Ulm in 1805.

After Albert Einstein moved to the US in 1933, he became quite a celebrity and his face was readily recognizable. He was frequently stopped in the street by people who would naively ask him if he could explain what “that theory” (i.e. the theory of relativity) was all about. Growing tired of this, he finally learned to tell people that he was sorry, but folks were constantly mistaking him for Albert Einstein!

25. Fenway Park team, familiarly : BOSOX
The Boston Red Sox is one of the most successful Major League Baseball teams and so commands a large attendance, but only when on the road. The relatively small capacity of Boston’s Fenway Park, the team’s home since 1912, has dictated that every game the Red Sox has played there has been a sell out since May of 2003.

29. ___ Lanka : SRI
The name Sri Lanka translates from Sanskrit into English as “venerable island”. Before 1970, Sri Lanka was known as Ceylon, a name given to the country during British rule. The lion on the country’s national flag symbolizes the fight against British colonialism.

32. City where “Peer Gynt” premiered : OSLO
Oslo, the capital of Norway, is an ancient city that was founded around 1048. The medieval city was destroyed by fire in 1624, and was rebuilt by the Danish-Norwegian king Christian IV and renamed Christiana. In 1877 there was an official change of the spelling to “Kristiana”, and then more recently in 1925 the name was restored to the original Oslo. Things have almost gone full circle for now the center of Oslo, the area that would have been contained by the original medieval walls, has apparently been renamed Christiana.

36. Disc-shaped vacuum cleaner from iRobot : ROOMBA
The Roomba vacuum cleaner is a cool-looking device that navigates its way around a room by itself, picking up dirt as it goes. Like I said, it’s cool-looking but I am note sure how effective it is.

40. Bit of pirate booty : SPANISH DOUBLOON
The doubloon was a Spanish gold coin worth two escudos. The name comes from the Spanish “doblón” which means “double”.

46. Jalopy : HEAP
The origins of our word “jalopy” meaning “dilapidated old motor car” seem to have been lost in time, but the word has been around since the 1920s. One credible suggestion is that it comes from Jalapa, Mexico as the Jalapa scrapyards were the destination for many discarded American automobiles.

48. Poker legend Ungar : STU
Many followers of the game believe that Stu Ungar was the best ever player of Texas hold ’em. Ungar won about $30 million playing cards during his life, yet he died penniless. He was found dead in a Las Vegas motel room in 1998 having passed away from heart failure at 45 years of age, brought on by years of drug abuse.

57. La Salle of “ER” : ERIQ
Eriq La Salle played Dr. Peter Benton on “ER”, and is best known in film for his portrayal of Darryl in the1998 comedy “Coming to America”.

66. It may be used with a plunger : TNT
TNT is an abbreviation for trinitrotoluene. The chemical was first produced by the German chemist Joseph Wilbrand in 1863, who developed it for use as a yellow dye. TNT is relatively difficult to detonate so it was on the market as a dye for some years before its more explosive properties were discovered.

67. Declaration of Independence signer? : QUILL
Quills have been used as writing implements since the 6th century. Historically goose, swan and turkey feathers have been the quills of choice. A bird’s feather is well suited for writing, as the hollow shaft acts as a reservoir for ink which then flows to the tip due to capillary action. Choice of feather is important. Right-handed writers are best served by feathers from the left wing, as the feather curves away from the palm of the hand when writing. The tip of the quill is sharpened using a “quill knife”. This quill knife is the ancestor of what we know today as a “penknife”.

71. Antianxiety medication : XANAX
Xanax is a brand name of the antianxiety drug alprazolam. Xanax is one of the most commonly misused prescription drugs in the US, with wide acceptance in the illegal recreational drug market.

Down
1. Measure for a batter?: Abbr. : TSP
One might measure out a teaspoon (tsp.) of an ingredient into a cake batter, say.

3. Hydroxyl compound : ENOL
An enol is an alkene with a hydroxyl group, sort of part-alkene, part-alcohol. The term “enol” therefore, is a portmanteau of “alkene” and “alcohol”.

4. Puzzle with its pluses and minuses? : REBUS
You’ll see rebus crosswords in the New York Times quite often. A rebus puzzle is one in which some squares are replaced with a symbol or picture (although we often use multiple letters when solving).

7. Tick off : PIQUE
Our term “pique” meaning a “fit of ill feeling” is a French word meaning a “prick, sting, irritation”.

11. Sony laptops : VAIOS
VAIO is a line of computers manufactured by Sony. The name was originally an acronym of Video Audio Integrated Operation, but this was changed to Visual Audio Intelligent Organizer on the occasion of the brand’s 10th anniversary in 2008.

12. Home of Brigham Young University : PROVO
Provo, Utah is a city located just over 40 miles south of South Lake City. Provo is home to Brigham Young University. The city was originally called Fort Utah, and the name was changed to Provo in 1850 in honor of Étienne Provost. Provost was a French-Canadian fur trader who was perhaps the first man of European descent to see the Great Salt Lake.

18. The Cornhuskers : NEBRASKA
The Nebraska Cornhuskers are the athletic teams of the University of Nebraska-Lincoln.

25. Lava lamp formation : BLOB
The lava lamp was invented in 1960 by a British man, Edward Craven-Walker. The “lava” is a mixture of wax and carbon tetrachloride, floating in a water/glycerol mix. The wax reduces in density as it picks up heat from the incandescent bulb in the lamp’s base. The wax rises, cools, and then sinks to the bottom of the liquid only to be heated again.

27. Saharan slitherers : ASPS
The asp is a venomous snake found in the Nile region of Africa. It is so venomous that the asp was used in ancient Egypt and ancient Greece as a means of execution. Cleopatra observed such executions noting that the venom brought on sleepiness without any painful spasms. Therefore, when the great queen opted to commit suicide, the asp was her chosen method.

28. Criticism : FLAK
Flak was originally an acronym from the German term for an aircraft defense cannon (FLiegerAbwehrKanone). Flak then became used in English as a general term for antiaircraft fire, and ultimately a term for verbal criticism, as in “take flak”.

35. “___ bodkins!” : ODS
“Odds bodkins” is a euphemism for “God’s body”, a term that was used as far back as Shakespeare’s time. In fact, Shakespeare used both “God’s body” as well as something close to “odds bodkins”, namely “God’s bodykins”.

39. Word usually abbreviated on timelines : ANNO
The designations Anno Domini (AD, “year of Our Lord”) and Before Christ (BC) are found in the Julian and Gregorian calendars. The dividing point between AD and BC is the year of the conception of Jesus, with AD 1 following 1 BC without a year “0” in between. The AD/BC scheme dates back to AD 525, and gained wide acceptance soon after AD 800. Nowadays a modified version has become popular, with CE (Common/Christian Era) used to replace AD, and BCE (Before the Common/Christian Era) used to replace BC.

47. Midwest city representing average tastes : PEORIA
The phrase, “Will it play in Peoria?” is used to mean, “Will it appeal to the mainstream?” It is believed the expression originated as a corruption of, “We shall play in Peoria”, a line used by characters in the 1890 novel “Five Hundred Dollars” by Horatio Alger, Jr.

52. Woman’s name meaning “peace” : IRENE
Eirene (also “Irene”) was the Greek goddess of peace, with “eirene” being the Greek word for “peace”. The Roman equivalent to Eirene was the goddess Pax.

53. Wild West show prop : RIATA
A riata is another name for a lariat or a lasso. So a riata is a rope with a noose on the end that can be thrown from a horse, usually to catch some animal. “Riata” comes from “reata”, the Spanish word for lasso.

56. “We’re Not ___ Take It” (“Tommy” tune) : GONNA
“Tommy” was the name given to the fourth album recorded by the British band, the Who. “Tommy” was the original “rock opera”, and was adapted for both the stage and screen, with both adaptations being huge successes.

58. Numbers follower: Abbr. : DEUT
Deuteronomy is the fifth book of the Hebrew Bible. The English title of Deuteronomy comes from a Greek word that translates as “second law”.

Numbers is the fourth Book of the Hebrew Bible, with the English title coming from the “numbering of the Israelites”, a census taken in the wilderness of the Sinai and again on the plain of Moab.

60. Defense secretary Panetta : LEON
Leon Panetta was Chief of Staff under President Clinton, and took over as CIA Director in 2009. Panetta has long been interested in protecting the world’s oceans. As an example, he wrote the legislation that created the Monterrey Bay National Marine Sanctuary.

61. “The Thin Man” canine : ASTA
Asta was the wonderful little dog in the superb movie “The Thin Man” starring William Powell and Myrna Loy (as Nick and Nora Charles). In the original story by Dashiell Hammett, Asta was a female Schnauzer, but on screen Asta was played by a wire-haired fox terrier called “Skippy”. Skippy was also the dog in “Bringing up Baby” with Cary Grant and Katherine Hepburn, the one who kept stealing the dinosaur bone. Skippy retired in 1939, so Asta was played by other dogs in the remainder of “The Thin Man” series of films.