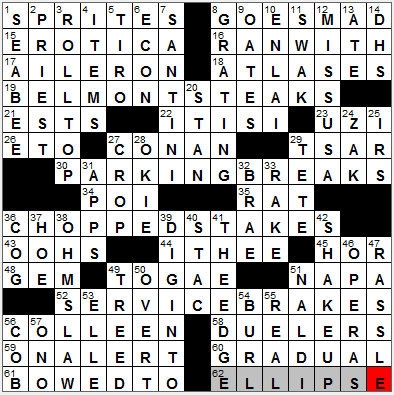 CROSSWORD SETTER: Alan Arbesfeld
THEME: STEAKS & BREAKS … there are two pairs of “punny” theme answers, with each pair containing homophones as the second part of the answer:


Today’s Wiki-est, Amazonian Googlies
1. The Rhinemaidens in the “Ring” cycle, e.g. : SPRITES
In Richard Wagners opera cycle known as “Der Ring des Nibelungen”, there are three “Rheintöchter”, or “Rhine daughters”. The trio are usually referred to as Rhinemaidens in English, and they are three water-nymphs.

18. Their images are out of this world : ATLASES
We call a book of maps an “atlas” after a collection of maps published by the famous Flemish geographer Gerhadus Mercator. His collection contained a frontispiece with an image of Atlas the Titan from Greek mythology holding up the world on his shoulders.

19. Entrees for one of Dion’s backup singers? : BELMONT STEAKS (homophone of “Belmont Stakes”)
Perhaps the biggest hits for Dion and the Belmonts were “A Teenager in Love” and “The Wanderer”.

The Belmont Stakes is a horse race held in June each year, at Belmont Park racetrack in Elmont, New York. The Belmont is the last of the US Triple Crown races, following the Kentucky Derby and the Preakness.

23. Weapon in some raids : UZI
The first Uzi sub-machine gun was designed in the late 1940s by Major Uziel Gal, who gave his name to the gun.

26. W.W. II arena : ETO
Dwight D. Eisenhower was in command of the European Theater of Operations (ETO) during WWII. If you’re a WWII buff like me, then I recommend you take a look at a great made-for-TV movie starring Tom Selleck as Eisenhower called “Ike: Countdown to D-Day” which came out in 2004.

27. Late-night TBS show : CONAN
Before Conan O’Brien came to fame as a late night talk show host he was a writer. He wrote for both “Saturday Night Live” and “The Simpsons”.

29. Old royal : TSAR
The term czar (also tsar) is a Slavic word, and was first used as a title by Simeon I of Bulgaria in 913 AD. It is derived from the word Caesar, which was synonymous with emperor at that time.

34. Laulau side dish : POI
I am a big fan of starch, and being an Irishman I love potatoes however they are prepared. That said, I think that poi tastes horrible! Poi is made from the bulbous tubers (corm) of the taro plant by cooking the corm in water and mashing it until the desired consistency is achieved.

Laulau is a traditional Hawaiian dish, consisting of pork wrapped in a taro leaf. Nowadays there is quite a variation in fillings.

45. Like a line whose slope is zero: Abbr. : HOR
The slope or gradient of a straight line is the ratio of the “rise” (delta y) to the “run” (delta x). If there is no difference in the values of y for all points in a line that delta y is zero, and the slope is zero. If the values of y are all the same, then the line is horizontal.

49. Forum garb : TOGAE
In Ancient Rome the classical attire known as a toga (plural “togae”) was usually worn over a tunic. The tunic was made from linen, and the toga itself was a piece of cloth about twenty feet long made from wool. The toga could only be worn by men, and only if those men were Roman citizens. The female equivalent of the toga was called a “stola”.

The Roman forum was the public space in the middle of a city, taking it’s name from the Latin word “forum” meaning a marketplace.

56. Irish lass : COLLEEN
“Cailín” is the Irish word for “girl”, and is usually anglicized as “Colleen”.

62. Orbital figure : ELLIPSE
One way to envision the two foci of an ellipse is to imagine two nails sticking up out of a board, placed a small distance apart. A loop of string is placed on the board, with the nails in the middle. A pen is then placed inside the loop, and moved as far away from the nails as possible, confined by the string. The pen is then run around the nails, stretching out the string so that it is taut. The pen will draw an ellipse, and the point where the nails are, they are the ellipse’s two foci.

Down
1. One making camp? : SEABEE
The Seabees are members of the Construction Battalions (CB) of the US Navy, from which the name “Seabee” originates. There’s a great 1944 movie called “The Fighting Seabees” starring John Wayne, that tells the story of the birth of the Seabees in WWII.

4. Celebrity couples, usually : ITEMS
An unmarried couple known to be involved with each other might appear in the gossip columns. This appearance as “an item” in the papers, led to the use of “item” to refer to such a couple, but only since the very early seventies.

5. Rookie: Var. : TIRO
A tyro (also tiro) is a beginner or a novice. “Tyro” comes into English from Latin, in which “tiro” means “a recruit”.

7. “Great” part for Duvall : SANTINI
“The Great Santini” is a 1979 film adaptation of a novel of the same name by Pat Conroy. The film stars Robert Duvall as a Marine office in the early days of the Vietnam War.

9. O. Henry Award winner for “In the Region of Ice” (1967) and “The Dead” (1973) : OATES
Joyce Carol Oates is a remarkable writer, not just for the quality of her work (her 1969 novel “them” won a National Book Award, for example) but also for how prolific is her output. She published her first book in 1963 and since then has published over fifty novels as well as many other written works.

10. China’s Zhou ___ : EN-LAI
Zhou Enlai (also Chou En-Lai) was the first government leader of the People’s Republic of China and held the office of Premier from 1949 until he died in 1976. He ran the government for Communist Party Leader Mao Zedong, often striking a more conciliatory tone with the West than that of his boss. He was instrumental, for example, in setting up President Nixon’s famous visit to China in 1972. Zhou Enlai died just a few months before Mao Zedong, with both deaths leading to unrest and a dramatic change in political direction for the country.

12. Wearer of a crown since 1952 : MISS USA
The Miss USA beauty pageant was founded in 1952 in order to select the American candidate for the Miss Universe competition.

24. Ringo’s drumming son : ZAK
Zak Starkey is an English drummer just like his Dad, Richard Starkey, better known as Ringo Starr. Zak has appeared with the Who, and Oasis.

25. Grp. with a complex code : IRS
The Internal Revenue Service (IRS) was set up during the Civil War to raise money to cover war expenses. Prior to the introduction of income tax in 1862, the government was funded by levies on trade and property.

29. Casse-___ (French brainteaser) : TETE
“Casse-tête” is the French word for a puzzle, literally translating as “brain or head crusher”.

31. Many downloads : APPS
You can download lots of applications (apps) if you have an iPad, say …

38. Current principle : OHM’S LAW
The unit of electrical resistance is the ohm (with the symbol omega), named after Georg Simon Ohm, a German physicist. Ohm was the guy who established experimentally that the amount of current flowing through a circuit was directly proportional to the voltage applied (V=IR), a relationship that every school kid knows as Ohm’s Law.

40. Opposite of legato: Abbr. : STAC
Staccato is a musical direction signifying that notes should be played in a disconnected form. The opposite of staccato would be legato, long and continuous notes played very smoothly.

41. U2 member : THE EDGE
The Edge is the stage name of U2 band member David Evans.

46. Met expectations? : OPERAS
The Metropolitan Opera of New York City is the largest classical music organization in the country, presenting about 220 performances each and every year. Founded in 1880, the Met is renowned for using technology to expand its audiences. Performances have been broadcast live on radio since 1931, and on television since 1977. And since 2006 you can go see a live performance from New York in high definition on the big screen, at a movie theater near you …

47. Brawl in the backwoods : RASSLE
“Rassle” is a slang word for “wrestle”.

53. Palindromic magazine title : ELLE
“Elle” magazine was founded in 1945 in France and today has the biggest circulation of any fashion magazine in the world. “Elle” is the French word for “she”.

54. Small knot : BURL
A “burl” is a small knot in a piece of wood or in cloth. The term is derived from the Old French “bourle” meaning “tuft of wool”.

55. Very, informally : REAL
I think the reference here is to the use of “real” as an adverb instead of “really”. I guess such a usage is considered acceptable or “informal” today. When I was a kid I would have had to stand in the corner for saying such a thing! Times have changed, and I guess I should as well …

57. Celebrity widowed in 1980 : ONO
Yoko Ono was born into a prosperous Japanese family, and is actually a descendant of one of the emperors of Japan. Her father moved around the world for work, and she lived the first few years of her life in San Francisco. The family returned to Japan, before moving on to New York, Hanoi and back to Japan just before WWII, in time to live through the great fire-bombing of Tokyo in 1945. Immediately after the war the family was far from prosperous. While Yoko’s father was being held in a prison camp in Vietnam, her mother had to resort to begging and bartering to feed her children. When her father was repatriated, life started to return to normal and Yoko was able to attend university. She was the first woman to be accepted into the philosophy program of Gakushuin University.

John Lennon was shot and killed by Mark David Chapman in New York City in December 1980. Chapman’s lawyers wanted him to file an insanity plea but instead he chose to plead guilty and was sentenced to life in prison, with eligibility for parole after 20 years. Chapman has been denied parole every two years since 2000 and is still an inmate of Attica State Prison.