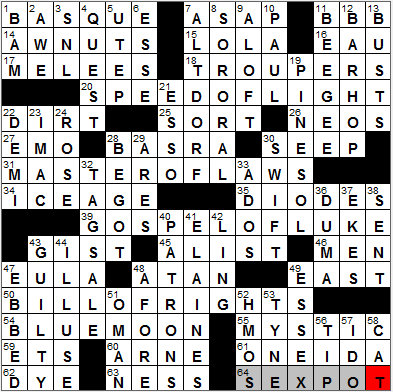 CROSSWORD SETTER: Kristian House
THEME: Leprechauns … each of the theme answers is a well-known term with “of” in the middle. The clue refers to the same term, but with “of” becoming a leprechaun’s O’ and the F joining the second word:

20A. Impatient leprechaun’s concern on an airplane? : SPEED O’ FLIGHT (speed of light)
31A. Degree for a leprechaun who’s an expert at finding imperfections? : MASTER O’ FLAWS (Master of Laws)
39A. Leprechaun’s book detailing the truth about flounders? : GOSPEL O’ FLUKE (Gospel of Luke)
50A. Scary legislation introduced by a leprechaun? : BILL O’ FRIGHTS (Bill of Rights)


Today’s Wiki-est, Amazonian Googlies
1. Language in which “hello” is “kaixo” : BASQUE
Basque is the language of the Basque people who inhabit northeastern Spain and some of southwestern France. The origins of the language seem to be unclear, and it’s not obvious whether or not Basque is related to any other language spoken today.

7. Chop-chop : ASAP
“Chop chop” is Chinese Pidgen English, and is just a reiteration of the word “chop” used in the sense of moving quickly.

11. Consumer protection org. : BBB
The Better Business Bureau is a private concern (nope, it is not a government agency), founded in 1912. It operates like a franchise, with local BBB’s managed independently but operating to a set of “corporate” guidelines.

15. Hit song with the line “When she squeezed me tight she nearly broke my spine” : LOLA
“Lola” is a fabulous song, written by Ray Davies and released by the Kinks back in 1970. Inspired by a real life incident, the lyrics tell of young man who met a young “lady” in a club, danced with her, and then discovered “she” was actually a transvestite. The storyline isn’t very traditional, but the music is superb.

17. Rows : MELEES
“Melee” comes from the French word (“mêlée”), and in both languages it means a “confused fight”.

27. Musical genre of Jimmy Eat World : EMO
The musical genre of “emo” originated in Washington D.C. in the 80s, and takes its name from “emotional hardcore”. Not my cup of tea …

28. Southern Iraqi city : BASRA
It’s quite a coincidence that the Iraqi city of Basra has a name that is an anagram of “Arabs”, isn’t it? Basra also features in the H. G. Wells science-fiction tale “The Shape of Things to Come”. Written in 1933, the storyline predicts a global conflict (WWII) that breaks out in 1940 lasting for ten years, after which chaos reigns as no victor emerges. Following worldwide plague, a benevolent dictatorship emerges and the world moves towards a serene utopia. In time, the dictators are overthrown and peacefully retired, and the people of the Earth live happily ever after, all citizens of one global state, with its capital in Basra in the Middle East.

34. Period when Long Island was formed : ICE AGE
Moraines are fields of debris that formed due to the presence or action of glaciers. Long Island in New York State, for example, was formed largely from two glacial moraines during the Ice Age.

35. Some electronic parts : DIODES
A diode is a component in a circuit, the most notable characteristic of which is that it will conduct electric current in only one direction. Some of those vacuum tubes we used to see in old radios and television were diodes, but nowadays almost all diodes are semiconductor devices.

48. Mussorgsky’s “Pictures ___ Exhibition” : AT AN
“Pictures at an Exhibition” is one of my favorite pieces of music. It is a suite of twelve movements originally created for the piano by Modest Mussorgsky in 1874. Most of the movements represent individual paintings (and vividly so!), works by Mussorgsky’s friend, the architect and artist Viktor Hartmann. Hartmann died unexpectedly at only 39, and soon after there was an exhibition of 400 of his paintings in St. Petersburg. Mussorgsky was inspired to write his “Pictures at an Exhibition” after having viewed the show.

50. Scary legislation introduced by a leprechaun? : BILL O’ FRIGHTS (Bill of Rights)
The Constitution of the United States was adopted on September 17, 1787. There have been 27 amendments to the constitution, the first ten of which are collectively called the Bill of Rights. In essence the Bill of Rights limits the power of the Federal Government and protects the rights of individuals. For example, the First Amendment states:

Former Congresswoman Gabrielle Giffords from Arizona participated in the reading of the US Constitution in the floor of the House of Representatives just a few days before she was shot in Tucson, Arizona on January 8, 2011. The First Amendment was that part of the Constitution that Congresswoman Gifford chose to read.

54. Rare astronomical event : BLUE MOON
As there is a full moon once every four weeks, approximately monthly, there are usually twelve full moons in any given year. However, every 2-3 years, depending on the phase of the moon at the beginning of the calendar year, there may be a thirteenth full moon. The “extra” full moon is called a “blue moon”, although no one seems to really know why the term “blue” is used, as far as I can tell. Which of the thirteen full moons that is designated as the blue moon varies depending on tradition. My favorite definition is from the Farmer’s Almanac. It states that as each of the seasons normally has three full moons (twelve divided by the four seasons), then the season with four full moons is designated as “special”, then, the THIRD full moon in that “special” season is the blue moon. Complicated, huh?

55. Maharishi, e.g. : MYSTIC
A Maharishi is a Hindu guru or spiritual teacher. “Maharishi” is derived from the Sanskrit for “great seer”.

59. Score keeper, for short? : ETS
The Educational Testing Service (ETS) was founded in 1947, and produces standardized tests for students from kindergarten through college. Perhaps most famously, ETS operates the SAT testing process.

60. Obama education secretary Duncan : ARNE
Long before Arne Duncan became Secretary of Education he was a professional basketball player, but not in the NBA. He played for the National Basketball League of Australia, for the Eastside Spectres in Melbourne.

Kevin Costner attributes some of his motivation to pursue an acting career to the great Welsh actor, Richard Burton. Back when Costner was taking acting classes, and was undecided about whether to continue chasing his dream, he ran into Burton on a flight from Puerto Vallarta. Burton agreed to chat with him for a little while, and so Costner was able to ask him if acting meant tolerating the kind of personal drama that had plagued Burton’s own life. Burton told him, “You have green eyes. I have green eyes. I think you’ll be fine”.

Down
3. Kind of short : SNL
Since 2005, the “Saturday Night Live” comedy show has been airing a feature called “SNL Digital Shorts”. These spots break away from the “live” format of the show, and are prerecorded for airing during the Saturday broadcast. The Digital Shorts are filmed on consumer-grade digital cameras and are edited on personal computers. They can feature members of the regular cast, musical guests, and celebrity cameos.

5. Miners’ sch. : UTEP
The University of Texas at El Paso (UTEP) was founded in 1914, originally as the Texas State School of Mines and Metallurgy. To this day there is a mineshaft on the campus.

10. Beatle who was born with the first name James : PAUL
Paul McCartney’s real name, including his knightly title, is Sir James Paul McCartney.

11. Any of the singers of “Jive Talkin'” : BEE GEE
The Brothers Gibb (hence, the name “The Bee Gees”) were born in England but grew up and started their musical careers in Australia. They moved back to Manchester in the north of England, and there hit the big time.

19. Clorox cleaner : PINE-SOL
Pine-Sol first came on the market in 1929, a cleaner based on pine oil.

21. Brand name in a blue oval : ESSO
The brand name Esso has its roots in the old Standard Oil company, as it uses the initial letters of “Standard” and “Oil” (ESS-O). The Esso brand was replaced by Exxon in the US but ESSO is still used in many other countries.

22. Brat Packer Moore : DEMI
The Brat Pack moninker is reminiscent of the Rat Pack of the fifties and sixties (Franks Sinatra & co.). To qualify as a “founding” member of the Brat pack the actor had to appear in either “The Breakfast Club” or “St. Elmo’s Fire”, or both. So we have Emilio Estevez, Anthony Michael Hall, Rob Lowe, Andrew McCarthy, Demi Moore, Judd Nelson, Molly Ringwald and Ally Sheedy.

Demi Moore was born Demetria Guynes and took the name Demi Moore when she married her first husband, Freddy Moore. She changed her name to Demi Guynes Kutcher a few years after marrying her present husband, Aston Kutcher. She still uses Demi Moore as her professional name.

23. Apple choice : IMAC
The iMac is a desktop computer platform from Apple, introduced in 1998. One of the main features of the iMac is an “all-in-one” design, with the computer console and monitor integrated.

29. Aphrodite’s lover : ARES
The Greek god Ares is often referred to as the Olympian god of warfare, but originally he was regarded as the god of blood-lust and slaughter.

32. Home-shopping event? : TAG SALE
A tag sale is a sale of household belongings, so called because the prices are usually marked on tags attached to the items for sale.

36. Russian diet : DUMA
A Duma is a representative assembly in Russia. The word “dumat” in Russian means “to think, consider”.

A Diet was a general assembly of the estates of the former Holy Roman Empire. The most famous of these assemblies was the Diet of Worms, a 16th-century meeting that took place in the small town of Worms on the Rhine River in Germany. The main item on the agenda was discussion of the 95 theses of Martin Luther. Luther was summoned to the meeting and was found to be guilty of heresy.

37. Squeezes (out) : EKES
To “eke out” means to “make something go further or last longer”. So, you can eke out your income by cutting back on expenses. I always have a problem with the commonly cited definition of “eke out” as “barely get by”. Close but no cigar, I say …

42. TV journalist Lisa : LING
Lisa Ling is a journalist, best known as one of the hosts of the television show “The View”.

49. County on the Thames : ESSEX
Essex is a county in England, referred to as one of the “home counties”.

The home counties are the counties that surround the city of London, outside of London itself. It’s not an official designation but has been in popular use since the 1800s.

51. Arab nation that’s not in OPEC : OMAN
Oman lies on the southeast coast of the Arabian Peninsula and is neighbored by the OAE, Saudi Arabia and Yemen. The capital city of Muscat has a strategic location on the Gulf of Oman and has a history of invasion and unrest. Centuries of occupation by the Persians ended in 1507 when the Portuguese took the city in a bloody attack. The Portuguese held Muscat for much of the next one hundred years until finally ousted by local Omani forces in 1648. A Yemeni tribe invaded the area in 1741 and set up a monarchy that has been in place ever since.

The OPEC cartel (the Organization of the Petroleum Exporting Countries) was formally established in 1960 and has been headquartered in Vienna since 1965. The US is actually the third largest oil producer in the world (after Russia and Saudi Arabia). One reason America isn’t in OPEC, even though we are a big producer, is that we import a lot more than we export. But you probably knew that already …

53. Newcastle’s river : TYNE
Newcastle-Upon-Tyne in the North of England is home to the famous Newcastle Brown Ale.