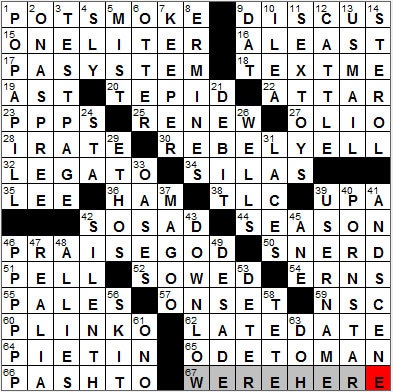 9. Ancient pentathlon event : DISCUS
The original pentathlon of the ancient Olympic games consisted of a foot race, wrestling, long jump, javelin and discus. When a new pentathlon was created as a sport for the modern Olympic Games, it was given the name the “modern pentathlon”. First introduced in 1912, the modern pentathlon consists of:

18. New Valentine’s phrase added on Sweethearts candy in 2010 : TEXT ME
The forerunner to Sweethearts candy was introduced in 1866, with the written sayings tailored for use at weddings. One of the original expressions was, “Married in pink, he will take a drink”. So, the original candy was a lot bigger. The smaller heart-shaped candy hit the shelves in 1901. The more contemporary saying of “text me” was added in 2010.

19. Prince Edward I. clock setting : AST
Atlantic Standard Time (AST) is four hours behind Greenwich Mean Time, and one hour ahead of Eastern Standard Time. The list of locations that use AST includes Puerto Rico and the Canadian provinces of New Brunswick and Nova Scotia.

22. Essence : ATTAR
Attar is a fragrant essential oil obtained from flowers, and the term may particularly refer to attar of roses.

23. Thought after an after-afterthought: Abbr. : PPPS
One adds a PS (postscriptum) at the end of a letter. A second postscriptum (or postscript) is a post postscriptum, a PPS. A third is a PPPS …

27. Scramble : OLIO
Olio is a term meaning a hodgepodge or a mixture, coming from the mixed stew of the same name. The stew in turn takes its name from the Spanish “olla”, the clay pot used when cooking the stew.

30. War cry of the ’60s : REBEL YELL
The rebel yell was used by confederate soldiers to intimidate the enemy and boost morale during battle. So, the “sixties” in the clue is the 1860s.

32. Smooth : LEGATO
Legato is a musical direction, signifying that long and continuous notes should be played very smoothly. The opposite of legato is staccato, notes played in a disconnected form.

36. Hot dog’s relative : HAM
The word “ham”, describing a performer who overacts, is apparently a shortened form of “hamfatter” and dates back to the late 1800s. “Hamfatter” comes from a song in old minstrel shows called “The Ham-Fat Man”. It seems that a poorly performing actor was deemed to have the “acting” qualities of a minstrel done up in black-face.

38. Cable inits. : TLC
The cable channel known today as TLC started out life as The Learning Channel. Programming on TLC was originally focused on educational content, but today there is an emphasis on programming imported from the UK.

51. Big name in educational funding :
Pell Grants are awarded by the federal government to students with financial need so that they can attend college. The grant is named for Senator Claiborne Pell, who sponsored the bill introducing aid for students.

54. Birds of prey : ERNS
The ern (also erne) is also called the white-tailed eagle, and the sea-eagle.

55. Etiolates : PALES
One can etiolate a plant by preventing exposure to sunlight. Without light, the plant does not produce chlorophyll so that it is white instead of green. One example of a crop grown this way is asparagus. White asparagus shoots are highly prized in northern Europe and command a hefty premium in price.

59. Grp. involved in the Abbottabad raid : NSC
The National Security Council (NSC) was created by President Harry S. Truman in 1947. The NSC is chaired by the sitting president, and meets in the White House Situation Room.

Abbottabad is a Pakistani city located about 30 miles north of the country’s capital of Islamabad. Abbottabad is the city in which Osama bin Laden was hiding out, and was killed by US special forces in May 2011. The code name for that remarkable mission was Operation Neptune Spear.

60. Onomatopoeic game on “The Price Is Right” : PLINKO
“The Price is Right” is a television game show that first aired way back in 1956!

65. Sophocles tribute that begins “Numberless are the world’s wonders …” : ODE TO MAN
Sophocles was one of three ancient Greek tragedians whose work has survived. The first of these was Aeschylus, the second Sophocles, and the third Euripides. Sophocles is believed to have written 123 plays, including the most famous, “Antigone” and “Oedipus the King”.

Down
3. Check that’s inked, perhaps : TEST PAGE
When checking out a printer one often prints out a test page.

8. Fur sources : ERMINES
Ermine is another name for the stoat. The stoat has dark brown fur in the summer, and white fur in the winter. Sometimes the term “ermine” is reserved for the animal during the winter when the fur is white. Ermine skins have long been prized by royalty and are often used for white trim on ceremonial robes.

10. They’re near appendices : ILEA
The human ileum is the lowest part of the small intestine, found below the jejumum and above the cecum of the large intestine.

The vermiform appendix is a small tube that connects to the cecum in the small intestine.

14. A biochemical solid : STEROL
Sterols occur in nature in both plants and animals. The most famous of the animal sterols is cholesterol, found in all animals as it is a vital component of cell walls. Cholesterol is made within the body, so it isn’t a necessary part of the diet.

33. Spring locales : OASES
The most famous oasis in the US is … Las Vegas, in the middle of the Mojave Desert.

37. 1997 Nielsen title role : MAGOO
Mr. Quincy Magoo is a wonderful cartoon character voiced by Jim Backus. Backus is probably equally well-known for playing Mr. Magoo as well as Thurston Howell, III on “Gilligan’s Island”. Mr. Magoo first appeared on the screen in a short called “The Ragtime Bear” in 1949. His persona was at least in part based on the antics of W. C. Fields. Backus originally used a fake rubber nose that pinched his nostrils in order to create the distinctive voice, although in time he learned to do the voice without the prop. My absolute favorite appearance by Mr. Magoo is in “Mr Magoo’s Christmas Carol”, a true classic from the sixties. There was a movie adaptation of “Mr Magoo” released in 1997, with Leslie Nielsen playing the title role.

46. Rare dynamic marking seen in Tchaikovsky’s Sixth Symphony : PPPPPP
Tchaikovsky’s popular Symphony No. 6 is known as the Pathétique. There is a bass clarinet part in the first movement that is required to be played very, very, very, very, very softly. That means the score uses the instruction “pppppp”, an extreme and unusual version of “pianissimo”.

47. Objects from everyday life : REALIA
My librarian wife tells me that she used the term “realia” for items that she couldn’t file away in the normal sense of operating a library. In other words they weren’t books, films or tapes, but were rather other objects that the library owned such as coins, badges, and various scientific samples, for instance.

49. “In order to know virtue, we must first acquaint ourselves with vice” speaker : DE SADE
The Marquis de Sade was a French aristocrat with a reputation for a libertine lifestyle. He was also a writer, well known for his works of erotica. He fell foul of the law for some his more extreme practices and for blaspheming the Catholic church. On an off, he spent 32 years of his life in prison and in insane asylums.

The departments of France are administrative divisions. The country is divided into 101 departments.

61. Conceptual art pioneer : ONO
Yoko Ono was born into a prosperous Japanese family, and is actually a descendant of one of the emperors of Japan. Her father moved around the world for work, and she lived the first few years of her life in San Francisco. The family returned to Japan, before moving on to New York, Hanoi and back to Japan just before WWII, in time to live through the great fire-bombing of Tokyo in 1945. Immediately after the war the family was far from prosperous. While Yoko’s father was being held in a prison camp in Vietnam, her mother had to resort to begging and bartering to feed her children. When her father was repatriated, life started to return to normal and Yoko was able to attend university. She was the first woman to be accepted into the philosophy program of Gakushuin University.

63. Line from Homer : D’OH
“The Simpsons” is one of the most successful programs produced by the Fox Broadcasting Company. Homer Simpson’s catchphrase is “D’oh”, now such a famous exclamation that it has been included in the Oxford English Dictionary (OED) since 2001.