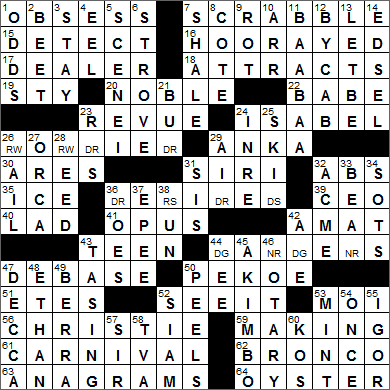 CROSSWORD SETTER: Kacey Walker & David Quarfoot
THEME: Scrabbled Words … we have a rebus puzzle today, with a twist. The rebus letters give two possible down-answers for the same clue. The across-answers are three possible arrangements of rack of Scrabble tiles. Complicated, but inventive …

Today’s Wiki-est, Amazonian Googlies
Across
7. Game with its own dictionary : SCRABBLE
The game of Scrabble has been around since 1938, the invention of an architect named Alfred Mosher Butts. Butts determined how many tiles of each letter, and the point value of each tile, by analyzing letter distributions in publication like “The New York Times”.

17. Casino employee : DEALER
The “casino” originated in the 1700s, first describing a public room for music or dancing. The name “casino” is a diminutive of “casa” meaning “house”.

20. Like the rightmost elements : NOBLE
The “rare gases” are better known as the noble gases, but neither term is really very accurate. Noble gas might be a better choice though, as they are all relatively nonreactive. But rare they are not. Argon, for example, is a major constituent (1%) of the air that we breathe. The noble gases are found on the very right of the periodic table of elements.

23. Theatrical event : REVUE
“Revue” is the French word for “review”.

29. Singer on Canada’s Walk of Fame since 2005 : ANKA
Canadian-born Paul Anka’s big hit was in 1957, the song entitled “Diana”. Anka was the subject of a much-lauded documentary film in 1962 called “Lonely Boy”.

Canada’s Walk of Fame acknowledges the accomplishments of successful Canadians. It was established in 1998 in Toronto. The “stars” are a clever design that incorporates five maple leaves.

30. Mars, to some : ARES
The Greek god Ares is often referred to as the Olympian god of warfare, but originally he was regarded as the god of blood-lust and slaughter. Ares united with Aphrodite to create several gods, including Phobos, Deimos and Eros. The Roman equivalent to Ares was Mars.

31. One with all the answers? : SIRI
Siri is software application that works with Apple’s iOS operating system. “Siri” is an acronym standing for Speech Interpretation and Recognition Interface. You’ve probably seen the ads on television, with folks talking to their iPhones asking for information and responding with a voice. I hear that Google is a little scared by Siri, as Siri is non-visual. There’s no need to touch a screen or a keyboard to work with Siri, no opportunity to click on one of Google’s ads! By the way, voice-over artist Susan Bennett recently revealed herself as the female American voice of Siri. The British version of Siri is called Daniel, and the Australian version is called Karen. By the way, “Siri” is a Norwegian name meaning “beautiful woman who leads you to victory”, and was the name the developer had chosen for his first child.

50. Orange ___ : PEKOE
A pekoe (or more commonly, orange pekoe) is a medium-grade black tea. There is no orange flavor in an orange pekoe tea. The “orange” name most likely derived from the name of the trading company that brought the tea to Europe from Asia.

51. Université breaks : ETES
In French, students at a university (université) get breaks during summers (étés).

56. Governor who said “I don’t think there’s anybody in America who would necessarily think my personality is best suited to being number two” : CHRISTIE
Governor Chris Christie of New Jersey is a prominent member of the Republican Party, and is often cited as a potential candidate in the 2016 presidential campaign. Christie is a huge Bruce Springsteen fan and has attended over a hundred Springsteen concerts.

Down
2. Sugar source : BEET
The biggest producer of sugar beets in the world is Russia, with France and the US in second and third place.

3. Blackjack choice : STAY
In the card game called Blackjack, an ace has the point value of one or eleven. When one of the two cards dealt to a player is an ace, the hand is called “soft”. This means that the player cannot go bust by taking another card, as the ace can be revalued at “one” if necessary in order to stay under 21.

5. When Kane dies in “Citizen Kane” : SCENE I
“Citizen Kane” was the first film made by Orson Welles, one considered by many to be the finest film ever made. It’s a remarkable achievement by Wells, as he played the lead, and also produced and directed. Despite all the accolades for “Citizen Kane” over the decades, the movie was far from a commercial success in its early run and actually lost money at the box office.

8. Dove’s home : COTE
The Old English word “cote” was used for a small house. Our modern word “cottage” comes from “cote”. We now use “cote” to mean a small shelter on a farm for sheep or birds.

San Francisco International Airport (SFO) serves as the main base of operations for Virgin America, and is also the maintenance hub for United Airlines. SFO was the site of a 2013 crash of an Asiana Airlines Boeing 777 that resulted in three fatalities. My wife and I had flown into SFO 24 hours earlier. That tends to be sobering …

14. Car that famously debuted on “E Day” : EDSEL
The Edsel brand of automobile was named for Edsel, son of Henry Ford. Sadly, the name “Edsel” has become synonymous with “failure”, which was no fault of Edsel himself who had died several years before the Edsel line was introduced. When the Ford Motor Company introduced the Edsel on 4 September 1957, Ford proclaimed the day to be “E Day”.

27. 1977 horror film set at sea : ORCA
“Orca” is a 1977 horror movie based on an Arthur Herzog novel of the same name. The film stars Richard Harris and Charlotte Rampling. “Orca” is often compared to “Jaws”, which was released just two years earlier. “Orca” tends to lose out in that comparison.

32. Ne plus ultra : ACME
“Ne plus ultra” is French for “no more beyond” and means just that in English, the high-point.

34. They’re often wasted : SOTS
Our word “sot” comes from the Old English “sott”, meaning a fool. The word “sot” started to be associated with alcohol and not just foolery in the late 1500s.

36. Some deer : DOES/ROES
Roe deer are found mainly in Europe. They would be the deer shown on television and in movies when Robin Hood was out hunting in Sherwood Forest.

45. How a superhero might stand : AKIMBO
Akimbo is such a lovely word, I think (as in “arms akimbo”). I failed to dig up anything too exciting about the term’s etymology. It seems to stem from Middle English, “in kekbowe” or “on kenbow” meaning “bend in a curve”.

46. Something a lawyer might once have called on? : NOTARY/ROTARY
A notary public is a public officer licensed to perform specific legal actions in non-contentious legal matters. The main duties are to administer oaths, take affidavits and witness the execution of documents.

The first patent for a rotary dial mechanism for a phone was granted in 1898, and the familiar rotary dial phones (with holes for the finger) were introduced by the Bell System in 1919. This form of dialing was called “pulse dialing”. When you dialed the number 5 say, the dial would rotate back to the start position, opening and closing electrical contacts five times and sending five pulses over the telephone line. I used to love rotary dial phones when I was a kid. My grandfather was a telephone engineer and he showed me how to “tap out” the pulses on the “hook” at the top of a pay phone. I was able to make free calls that way. He definitely contributed to the corruption of a minor …

47. Record label for Jimmy Dorsey and Louis Armstrong : DECCA
Decca Records started out in 1929 as a British record label. The US branch of Decca was opened up in 1934, but the UK and US entities went their separate ways starting in WWII.

Louis Armstrong was born in New Orleans in 1900. Armstrong had a poor upbringing, and only stayed in school till he was 11 years old. The exact origin of Louis’s nickname “Satchmo” seems to be a little unclear. One story is that he used to dance for pennies in New Orleans as a youngster and would hide those pennies in his mouth away from the other kids. For this he earned the nickname “satchel mouth”, which was shortened to “Satchmo”.

48. Allen in history : ETHAN
Ethan Allen was one of the founders of the state of Vermont. Allen was also a hero in the American Revolutionary War, famous for leading (along with Benedict Arnold) the small band of men that captured Fort Ticonderoga. And yes, the Ethan Allen store and furniture line is named for Ethan Allen the patriot.

49. “You can observe a lot by watching” speaker : BERRA
Yogi Berra is regarded by many as the greatest catcher ever to play in Major League Baseball, and has to be America’s most celebrated “author” of malapropisms. Here are some greats:

52. Twins’ home? : SIAM
Siamese twins are identical twins who are conjoined. Famously, the conjoined twins Chang and Eng Bunker traveled with P.T. Barnum’s circus in the last half of the 19th century. The Bunker twins were billed as the Siamese Twins, as they were born in Siam, which is now Thailand. This led to the condition being called “Siamese twins”.

53. Moneymaking enterprise : MINT
The first mint in the US was established in 1792 in Philadelphia, which was the nation’s capital at that time. The modern Philadelphia Mint was opened in 1969, and is the fourth building used a mint in the city. The facility can produce a million coins in the just half an hour.

55. Operatic prince : IGOR
“Prince Igor” is an opera by the Russian composer, Alexander Borodin. Borodin died before he had finished “Prince Igor”, so it was completed by Nikolai Rimsky-Korsakov and Alexander Glazunov. Music from “Prince Igor” and other Borodin works was used in the American musical “Kismet”.

57. Rap’s ___ Mix-a-Lot : SIR
Sir Mix-a-Lot is the stage name of the the record producer and rap artist Anthony Ray.

58. Dam-building org. : TVA
The Tennessee Valley Authority (TVA) has to be one of America’s great success stories when it comes to economic development. Created in 1933, the TVA spearheaded economic development in the Tennessee Valley at the height of the Great Depression. Central to the success was the federally-funded construction of flood-control and electricity-generation facilities.