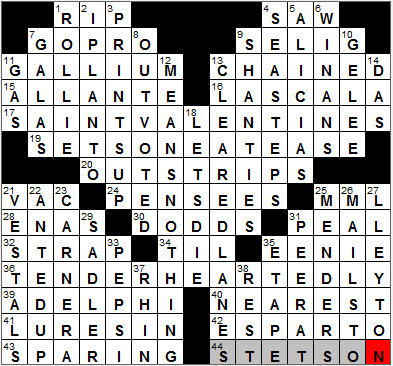 
Today’s Wiki-est, Amazonian Googlies
9. Head honcho in baseball : SELIG
Bud Selig is the current commissioner of Major League Baseball. He became acting commissioner in 1992 after the resignation of Fay Vincent. The team owners searched for new commissioner for six years, and finally gave the permanent job to Selig in 1998.

11. Element in many semiconductors : GALLIUM
Gallium is a soft metal that doesn’t occur in nature in metallic form, but rather as a salt in aluminum and zinc ores. If you take a little gallium metal and just rest it in your hand, the heat from your body is enough to make it melt! Gallium has been used in the semiconductor industry for decades. For example, gallium nitride is used in making blue light emitting diodes (LEDs), so important these days at Christmas!.

15. Late 1980s Cadillac : ALLANTE
The Allanté was a luxury roadster, Cadillac’s first attempt to get into the roadster market. The car never met up to the company’s expectations in terms of sales, with just over 20,000 of them sold from 1987 to 1993.

16. Literally, “the Stairway” : LA SCALA
La Scala Opera House opened in 1778, built on the site of the church of Santa Maria della Scala, which gave the theater its name. The church had been named in honor of Beatrice Regina della Scala who was the wife of the Lord of Milan at the time the church was built. “La Scala” translates from Italian as “the stairway”, but this literal translation has very little to do with the naming of the theater that we know today.

17. ___ Day : SAINT VALENTINE’S
Saint Valentine’s Day was chosen to honor various martyrs with the name Valentine, by Pope Gelasius I in 496 AD. However, the saints’ day was dropped by the Catholic church in 1969, by Pope Paul VI. Try telling that to Hallmark though …

21. Closet item, for short : VAC
The first practical portable vacuum cleaner was invented by James Spangler in 1907. He sold the patent for the design to his cousin’s husband, William Henry Hoover. Hoover then made his fortune from manufacturing and selling vacuum cleaners. Hoover was so successful in my part of the world that back in Ireland we don’t use the verb “to vacuum” and instead say “to hoover”, and a hoover is what we call a vacuum cleaner, regardless of who makes it.

24. Collection of Blaise Pascal writings : PENSEES
“Une pensée” is French for “a thought”.

The mathematician and physicist Blaise Pascal also wrote on the subject of theology. His most important theological writings were published after his death, under the title “Pensées”, or “Thoughts”.

Blaise Pascal was an important French mathematician and physicist, who lived in the mid-1600s. In math, his name was given to Pascal’s triangle, a triangle of numbers in which each number is the sum of the two numbers above it.

28. Spanish queen and namesakes : ENAS
Princess Victoria Eugenie of Battenberg was the queen consort of King Alfonso XIII of Spain. Princess Beatrice was actually born in Scotland and given the Gaelic name for Eva, namely “Eua”. Eua, was written on the official documents, but the clergyman presiding at the christening misread the name as “Ena”. Her family stuck with “Ena”, and it was adopted by the public.

30. Father-and-son Connecticut congressmen Thomas and Chris : DODDS
Thomas Dodd was both a US Senator and Representative for the State of Connecticut. Dodd was the second highest ranking counsel at the International Military Tribunal held in Nuremberg after WWII, and spent about a year and a half in Germany. For his work after the war, he was awarded the Presidential Medal of Freedom. Dodd entered politics on his return to the US although his career ended badly as he was censured by the US Senate for the personal use of campaign funds.

Chris Dodd is a Democrat who served as the Senator for the State of Connecticut for 30 years until 2011, when he chose not to run for reelection. Dodd now works as the chief lobbyist for the Motion Picture Association of America.

39. Long Island university : ADELPHI
Adelphi University is located in Garden City, New York on Long Island. The university started out as Adelphi Academy in Brooklyn in 1863. By 1929 the academy had moved to Garden City and was a woman’s college. It reverted to co-education after WWII when it admitted many students under the GI Bill.

42. Grass for some baskets : ESPARTO
Esparto grass is grown in parts of Africa and Europe mainly for use in cord and basket making, although some esparto is used to make a fine quality paper for books. We don’t see it very much here in North America.

44. It might be tipped at a rodeo : STETSON
Stetson is a brand name of hat, manufactured by the John B. Stetson Company of St. Joseph, Missouri. The so called “cowboy hat” that Stetson pioneered was such a success that the company became the largest hat maker in the world, producing over 3.3 million hats per year.

Down
1. Fingers on a diamond : ROLLIE
Rollie Fingers is a former MLB relief pitcher, only the second relief pitcher to be elected to the National Baseball Hall of Fame. Fingers is noted for his waxed handlebar moustache. He originally grew it along with other players to get a bonus payment while playing for the Oakland Athletics, but he still sports it to this day.

5. Keys and Markova : ALICIAS
Alicia Keys is the stage name of Alicia Cook, an R&B and soul singer from Hell’s Kitchen in New York City.

Dame Alicia Markova was an English ballerina, born Lilian Alicia Marks in London in 1910. She is one of only two English dancers to have been named as a prima ballerina assoluta, with the other being Dame Margot Fonteyn.

8. Like John Kerry in 2004 : OUTVOTED
John Kerry enlisted in the Naval Reserve in 1966 and went straight into Officer Candidate School. His first post was as an ensign on a frigate in the Vietnam theater, mainly working on rescue missions picking up downed pilots. He requested a transfer to Swift boat duty. While serving on Swift boats he was awarded the Silver Star, Bronze Star and three Purple Hearts.

9. Opposites of mansions : SHANTIES
Our word “shanty” is used for a rough cabin. It comes from the Canadian French word “chantier”, which is a “lumberjack’s headquarters”.

10. Food topping in France : GELEE
“Gelée” is the French word for “frost”. It’s also the word used in France for Jello.

21. Maintainers of a sacred flame in ancient Rome : VESTALS
In Ancient Rome the priestesses of the goddess Vesta were known as the Vestals. One of the responsibilities of the Vestals was to maintain Rome’s sacred fire that could not be allowed to go out. They were also called the Vestal Virgins as they took a vow of chastity, although they weren’t required to be celibate for life. Each priestess entered the order before puberty and promised to live a celibate life for thirty years. The first decade was spent as a student, the second in service, and the final ten years as a teacher. Upon completion of the thirty years the Vestal was free to marry, but few did. Life was a lot better for a woman in the priesthood than it was subject to Roman Law.

23. Boxing Hall-of-Famer Primo : CARNERA
Primo Carnera was an Italian boxer and former world heavyweight champion. He was a big guy for an Italian in his day, standing at almost 6’ 9” tall and weighing over 280 pounds. Given his size, he was called the Ambling Alp.

27. ___ Hewitt, 2002 Wimbledon winner : LLEYTON
Lleyton Hewitt is an Australian tennis player. He was ranked number one in the world in 2001 at the age of 20, the youngest player to achieve that honour.

33. One side of a longstanding ad battle : PEPSI
The Pepsi-Cola formulation was developed by one Caleb Bradham who made the drink at home and sold it as “Brad’s Drink”. His aim was to make a drink that was pleasant to taste that would aid digestion and boost energy. He included in the formula pepsin (a digestive enzyme) and kola nuts, eventually using these ingredients as inspiration for a new name for the drink, Pepsi-Cola.

35. Military encampment : ETAPE
“Étape” is the French word for stage, as in a “stage” in the Tour de France. It is used in English military circles to describe where troops halt overnight, but can also describe the section of the march itself. So, a march can be divided into stages, into étapes.