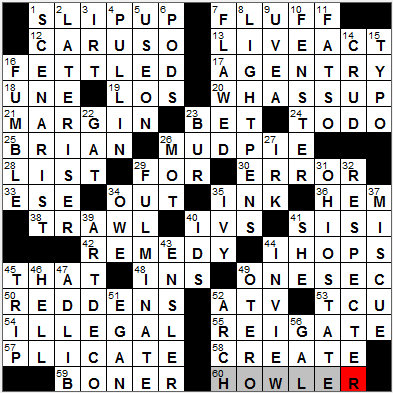 CROSSWORD SETTER: Jim Page
THEME: MARGIN FOR ERROR … all of the answers around the MARGIN of the grid are words that mean ERROR:


Today’s Wiki-est, Amazonian Googlies
12. Player of TV’s Caine : CARUSO
David Caruso plays Lieutenant Horatio Caine on the TV spin-off series called “CSI: Miami”. I find that Caine character to be one of the most annoying on television …

16. Lined, as a furnace hearth : FETTLED
“To fettle” is to line a hearth or furnace with sand or some other suitable material, before pouring in molten metal.

17. Representative’s work : AGENTRY
“Agentry” … what an agent does!

The city of Nice lies on the Mediterranean coast of France, not far from the Italian border. Although it is only the fifth most populous city it has the second busiest airport in the country (after Paris), a reflection of the vast number of jet-setting tourists that flock to Nice and environs.

19. L.A.P.D. part : LOS
The Los Angles Police Department (LAPD) is the third largest local law enforcement agency in the country, after New York PD and Chicago PD. Among other things, LAPD is famous for creating the first Special Weapons and Tactics (SWAT) team in the US, in 1965.

25. Monty Python title character : BRIAN
“Monty Python’s Life of Brian” is a religious comedy satire film released by the Python team in 1979. It tells the story of Brian, a young man born on the same day as Jesus Christ but in the house next door. The film was controversial because of its subject matter and was actually banned in my home country of Ireland, and indeed in Norway. The marketing team promoting the film used the controversy to advantage by adding the tagline “So funny it was banned in Norway!” on the movie posters. “Life of Brian” was the most successful British film in the US in 1979.

33. Yuma-to-Tombstone dir. : ESE
The city and county of Yuma take their name from the Quechan (aka Yuma) Native American tribe that inhabited the area.

36. Stumble, in a way : HEM
“Hem” is a short cough or clearing of the throat, a stumble in speech perhaps.

53. 2011 Rose Bowl winner, for short : TCU
The athletic teams of Texas Christian University (TCU) are known as the TCU Horned Frogs. The Texas horned lizard is known colloquially as the “horned frog”.

55. Market town that’s a suburb of London : REIGATE
The market town of Reigate lies in London’s commuter belt. Reigate is in the county of Surrey.

Down
1. Film planner : SCENARIST
“Scenarist” is another word for “screenwriter”.

3. First subway line in N.Y.C. : IRT
The Interborough Rapid Transit Company (IRT) was the original private operator of the New York Subway when it opened in 1904. The city took over ownership of the system in 1940, but the lines originally operated by the IRT are still known by the IRT moniker.

8. Implements for “writing” on computer screens : LIGHT PENS
A light pen is a computer input device. Light doesn’t come out of the pen but rather the “pen” is sensitive to light. The pen is touched to the screen and “reads” what the pen is pointing to.

9. Part of the face whose name is derived from the Latin for “grape” : UVEA
The uvea is the middle of the three layers that make up the eyeball.

10. 1960s title sitcom character : FENSTER
“I’m Dickens, He’s Fenster” is a sitcom that had a very short run in the early sixties. The show starred John Astin (later to play Gomez on the “The Addams Family”) and Marty Ingels as two carpenters in a construction gang.

22. Old gang weapon : GAT
“Gat” is the slang term for the Gatling gun, the precursor to the modern machine gun. The Gatling gun was invented by Dr. Richard J. Gatling in 1861. Apparently he was inspired to invent it so that one man could do as much damage as a hundred, thereby reducing the size of armies and diminishing the suffering caused by war. Go figure …

23. Prickly seedcase : BUR
“Bur” is a variant spelling of the word “burr”, a seed vessel that has hooks or prickles on the outside.

29. Rant : FULMINATE
To “fulminate” is to explode or detonate, perhaps in rage. It’s a lovely word derived from the Latin “fulminare” meaning “to hurl lightning”.

31. School whose football stadium is nicknamed the Horseshoe : OHIO STATE
The athletic teams of Ohio State University are called the Buckeyes, named after the state tree of Ohio. In turn the buckeye tree gets its name from the appearance of its fruit, a dark nut with a light patch, thought to resemble a “buck’s eye”.

Ohio Stadium is on the campus of Ohio State University. It was opened way back in 1922, and has been expanded three times since then. The south end of the stadium is open giving rise to the nickname “the Horseshoe”.

35. Brown, e.g. : IVY
The term “Ivy League” originally defined an athletic conference, but now it is used to describe a group of schools of higher education that are associated with both a long tradition and academic excellence. The eight Ivy League Schools are: Brown, Columbia, Cornell, Dartmouth, Harvard, Princeton, the University of Pennsylvania, and Yale.

Brown University in Providence, Rhode Island is one of the eight Ivy League schools. Brown has been around a long time, founded in 1764, years before America declared independence from England. The university took the name of Brown in 1804 after one Nicholas Brown, Jr. who gave a substantial gift to the school.

39. Like New York’s Waldorf-Astoria Hotel : ART DECO
Art Deco is the name given to a style of design and architecture of the 1920s that actually had its roots in Belgium and then spread throughout Europe before arriving in North America. Celebrated examples of art deco architecture are the magnificent Chrysler Building in New York City completed in 1930, and the GE Building that sits in the middle of Rockefeller Center also in New York City, with the address of “30 Rock”.

The Waldorf=Astoria (note the double hyphen) is named for the famous Astor family of New York that was so successful in business. The first Astors to arrive in the US immigrated from Walldorf in Germany. Two members of the family eventually built hotels in the city, one called the Walldorf (opened in 1893) and the other the Astoria (opened in 1897), with the pair operating next door to each other in competition. The hotels were eventually joined into one, creating the world’s largest hotel of the day. The original Waldorf=Astoria was demolished (the Empire State Building occupies that space now). The current hotel is an Art Deco landmark in the city, opened in 1931.

41. Lord Byron’s “___ Walks in Beauty” : SHE
“She Walks in Beauty” is one of the most famous poems written by Lord Byron. The poem is very descriptive of an elegant and beautiful woman. He wrote it the day after seeing his cousin, who was in mourning at the time, walking by in a black dress set with spangles. The opening lines are:

“She walks in beauty, like the night
Of cloudless climes and starry skies”

George Gordon Byron, known simply as “Lord Byron”, was an English poet active in the early 1800s. He was equally as famous for his poetry as he was for the wild excesses in his personal life. He lived much of that life outside of England and fought for revolutionaries in both Italy and Greece. Lord Byron died from a fever contracted while fighting for the Greeks against the Ottomans.

43. Tony-winning playwright Eve : ENSLER
Eve Ensler is a playwright whose most famous work is “The Vagina Monologues”. When Ensler was only 23 years of age she adopted a 15 year old boy. We are familiar with that boy on the big screen these days … actor Dylan McDermott.

47. It’s not scripted : AD LIB
“Ad libitum” is a Latin phrase meaning “at one’s pleasure”. In common usage the phrase is usually shortened to “ad lib”. On the stage the concept of an “ad lib” is very familiar. For example, an actor may substitute his or her own words for forgotten lines uses an ad lib, or a director may instruct an actor to use his or her own words at a particular point in a performance to promote a sense of spontaneity.