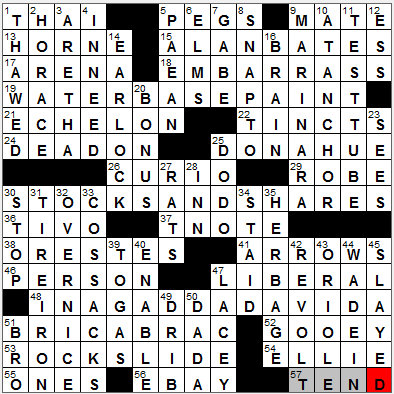 13. Mezzo-soprano Marilyn : HORNE
Marilyn Horne is a mezzo-soprano opera singer from Bradford, Pennsylvania. Her first major engagement was to dub the female lead voice in the 1954 film “Carmen Jones”.

15. 1968 Best Actor nominee for “The Fixer” : ALAN BATES
Alan Bates was a marvelous English actor who was probably at the height of his career in the sixties. Some of his more noted performances are in “Zorba the Greek”, “Georgy Girl”, “Far From the Madding Crowd”, “Women in Love” (with that famous naked wrestling bout with Oliver Reed), and “The Rose”.

“The Fixer” is a British film released in 1968, based on a novel of the same name by Bernard Malamud. The film tells the story of a Russian Jew who is wrongfully accused of murder, and is based on a true story. The lead is played by the wonderful actor, Alan Bates.

17. A blimp may hover over one : ARENA
There is an important difference between a “blimp” (like “The Goodyear Blimp”) and an airship (like a Zeppelin). An airship is a rigid structure with an internal framework that helps maintain the shape of the airbag. A blimp on the other hand, uses the pressure of the helium gas inside the airbag to give it shape. Blimps are usually heavier than air, so will float naturally to the ground. They maintain their lift with forward motion, by raising the nose slightly.

25. It was MSNBC’s highest-rated program when canceled in 2003 : DONAHUE
Phil Donahue is a television personality best known for creating and hosting “The Phil Donahue Show”, which ran for 26 years.

“Donahue” was a show hosted on MSNBC by longtime talk show host Phil Donahue. Donahue had basically retired after a 26-year run with the successful “Phil Donahue Show” on network television, and then was persuaded to join MSNBC. “Donahue” only ran for a few months before it was cancelled for having low viewership. That said, it had the highest viewership of any show on MSNBC at that time, so there was obviously more going on …

36. Device with a hard disk : TIVO
TiVo was introduced in 1999, and was the world’s first commercially successful DVR (Digital Video Recorder). If you don’t have a DVR, you might want to consider getting one. For those who enjoy television, it’s very liberating.

37. It has a denomination of $1,000 : T-NOTE
A Treasury note (T-Note) is a government debt that matures in 1-10 years. A T-Note has a coupon (interest) payment made every six months. The T-note is purchased at a discount to face value, and at the date of maturity can be redeemed at that face value. A T-Bill is a similar financial vehicle, but it matures in one year or less, and a T-Bond matures in 20-30 years.

38. Homeric character who commits matricide : ORESTES
Orestes is a character appearing in Greek mythology, and is the subject of several Ancient Greek plays. In a story by Homer, Orestes kills his mother Clytemestra. He does so in revenge as Clytemestra had killed her husband and father of Orestes, Agamemnon. In turn, Agamemnon had been killed for sacrificing his daughter Iphigenia in order to get favorable winds on a sea voyage. Heavy stuff …

41. Weapons used to finish off the Greek army at Thermopylae : ARROWS
The Battle of Thermopylae took place in 480 BC, fought between the Persian Empire of Xerxes and an alliance of Greek city-states led by Sparta. The Greeks chose the narrow pass of Thermopylae to make a stand against the advancing Persian army, as there they could minimize the advantage that the Persians had with their vast number of soldiers. The pass of Thermopylae was so narrow that only one chariot could pass through at a time. Famously, the greatly outnumbered Spartan forces held this pass with hand-to-hand combat for two full days, until a local resident showed the Persians a way around the pass so that the Greek army could be attacked and annihilated from the rear.

47. To the left : LIBERAL
The concept of left-right politics started in France during the French Revolution. When members of France’s National Assembly convened in 1789, supporters of the King sat to the President’s right, and supporters of the revolution to the President’s left. The political term’s “left” and “right” were then coined in the local media and have been used ever since.

48. Psychedelic 1968 song featuring a lengthy drum solo : IN-A-GADDA-DA-VIDA
“In-A-Gadda-Da-Vida” is a song performed by Iron Butterfly and released in 1968. The song goes on for a full 17 minutes and so takes up the whole of the second side of the album of the same name. The song was supposed to be called “In the Garden of Eden”, but the lead singer got drunk during the recording session and slurred the words, and everyone like the effect apparantly!

51. What a whatnot has : BRIC-A-BRAC
Bric-a-brac was a French phrase that was used as far back as the 16th century, but it is no longer used in France. Back then it was a nonsense term meaning “at random” or “any old way”. Since Victorian times we have used the phrase in English to mean a collection of curios, statues and the like. Unlike back then, in modern usage bric-a-brac tends to be a selection of cheaper items.

A “whatnot” is a set of shelves used to display ornaments.

“The West Wing”, when it was being written by Aaron Sorkin, was such a fabulous television event. It is remarkable how quickly it went downhill after Sorkin moved on. Sorkin is also famous for having written the play “A Few Good Men”, and one of my favorite screenplay;s “Charlie Wilson’s War”.

56. Company whose Nasdaq symbol is the company’s name : EBAY
eBay is an auction site with a twist. If you don’t want to enter into an auction to purchase an item, there’s a “Buy It Now” price. Agree to pay it, and the item is yours!

Down
2. Poet who gave us “carpe diem” : HORACE
One of Ancient Rome’s leading lyric poets was Quintus Horatius Flaccus, or “Horace” as we tend to know him.

“Carpe diem” is a quotation from Horace, one of Ancient Rome’s leading lyric poets. “Carpe diem” translates from Latin as “seize the day” or “enjoy the day”.

3. Singer at Barack’s inauguration : ARETHA
I think Aretha Franklin, the Queen of Soul, had a tough life. She had her first son when she was 13-years-old, and her second at 15. In 2008, “Rolling Stone” magazine ranked her as number one in their list of the greatest singers of all time.

5. Hymn sung to Apollo : PAEAN
A paean is a poem or song that expresses triumph or thanksgiving. “Paean” comes from the ancient Greek “paian” meaning “song of triumph”.

6. Trees in Gray’s country churchyard : ELMS
Perhaps the most famous elegy in the English language is that written by Thomas Gray, completed in 1750. His “Elegy Written in a Country Churchyard” is the source of many oft-quoted phrases, including:

7. Kaplan who co-hosted six seasons of “High Stakes Poker” : GABE
“Welcome Back, Kotter” was a sitcom from the the late seventies. The title character was a teacher at Buchanan High, one Gabe Kotter who himself had attended the school as a student. Kotter was played by Gabe Kaplan. One of the prominent students in his class was a young John Travolta, playing a role that launched his film career. In recent years you might have seen Gabe Kaplan as co-host of the popular show “High Stakes Poker” on GSN.

8. Acknowledge a commander’s entrance, maybe : SNAP TO
Snap to attention …

9. Pizza sauce : MARINARA
Italians use the term “marinara” but not for a sauce, but in the name of a recipe. For example, “spaghetti alla marinara” would be a spaghetti dish. The literal translation of the name of this dish would be “mariner’s spaghetti”. The sauce that we call “marinara” is called “salsa di pomodoro” in Italy.

12. Letter on Kal-El’s costume : ESS
Kal-El was sent to Earth from his home planet, where we know him better as Superman.

14. One hanging at a temple : EARLOCK
An earlock is a curled lock of hair that hangs in front of the ear. Go figure …

25. Dimwit : DODO
A dodo is a foolish person, and dodo is word that comes into English from the Portuguese “doudo”. “Doudo” was a slang term used by Portuguese sailors for the extinct bird that we now know as the dodo.

31. Trunk item : TIRE IRON
You won’t see tire irons in many trunks anymore, as they were tools used in working with tires that had inner tubes. Now, if you have a bicycle you might have a set of tire irons.

33. Once-autonomous people of southern Russia : COSSACKS
The cossacks are a people who lived in communities that are now in Southern Russia and Ukraine.

39. Senate sheets : TOGAS
In Ancient Rome the classical attire known as a toga (plural “togae”) was usually worn over a tunic. The tunic was made from linen, and the toga itself was a piece of cloth about twenty feet long made from wool. The toga could only be worn by men, and only if those men were Roman citizens. The female equivalent of the toga was called a “stola”.

43. Baltimore’s ___ Park : ORIOLE
Oriole Park is home to the Baltimore Orioles baseball team. The full name of the stadium is Oriole Park at Camden Yards.

50. Surrealism forerunner : DADA
Dadaism thrived during and just after WWI, and was an anti-war, anti-bourgeois and anti-art culture. The movement began in Zurich, Switzerland, started by a group of artists and writers who met to discuss art and put on performances in the Cabaret Voltaire, frequently expressing disgust at the war that was raging across Europe.